So Earl and I headed to the Carrier Dome in Syracuse for the first SU Orange Football game of the season. We’ve been looking forward to football season and it was a gorgeous day to make the trip.

I love the Dome. It’s hard to believe that it’s 33 years old. They have made a bunch of renovations to the displays around the place; there are two HD-quality monitors at each of the field now and an LED ribbon that circles the entire Dome. With the addition of the ribbon, the smaller scoreboards are gone; the displays are now incorporated into the ribbon, but in only two spots. And they disappear frequently to make room for advertising. I found that odd. The old big screen display has been repurposed into a permanent scoreboard that sits in the northwest corner.

Then I noticed that they had replaced the time and temperature display that used to sit in the northeast corner. Installed with the building of the Dome in 1980, this display was the lightbulb type that you would find on the front of the bank at the time, and it proudly displayed the time and temperature in a “lazy” alternating display. And it displayed the temperature in both Fahrenheit and Celsius! That’s right, it was installed when the U.S. was going to convert to metric. I noticed that the new, high tech display the replaced this retro-tech goodness only uses Fahrenheit.

Nevertheless, I still love the Dome.

But, one step forward, two steps back. 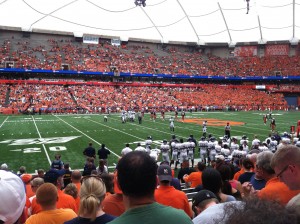 Actually, the game was all about one step forward, two steps back and we ended up losing to Northwestern by one point. Ugh. There were plenty of visiting fans sitting around us. They make me hostile but I’m not mean to them or anything. I mean, if I drop popcorn on them, it’s not on purpose or anything like that.

The Orange had way too many penalties and mistakes and at one point they were down 13-35, but then closed the gap during the third quarter. I really thought we’d done it but with less than two minutes left in the game, we lost it.

On the way home from the game I told Earl that we should consider going to an away game this season so I can know what it’s like to be a visiting fan. Perhaps I wouldn’t feel quite as hostile towards the visiting fans that are just cheering for their team. Except Rutgers fan. As I always say about Rutgers fans, at least we don’t have to live in Jersey.

Here’s Earl on the bus from Skytop to the Carrier Dome. Because of the Carrier Dome’s downtown location, parking near the Dome can be a bit of challenge. This year we’ve decided to stick to Skytop, one of the remote parking areas where plenty of buses shuttle fans back and forth. Plus there’s a lot of tailgating! 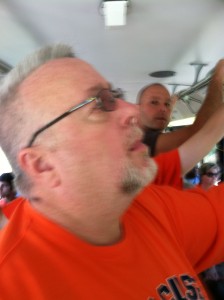 Another shot of the Dome. 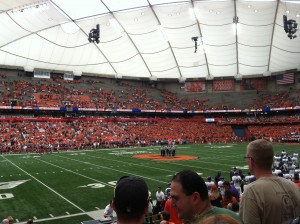 Some people don’t get how much I love Syracuse. It’s my native stomping grounds, after all and that comfort just rings true to me after all these years. It’s the one city in the Northeast that I could live the rest of my life in.