It is interesting being owned by a cat that is 16 years old and nearly deaf. Now before I get started, whether he is deaf or not is up to debate, because some think he has perfected the art of selective hearing but I think he’s gone deaf. Being his servants, it is still up to us to meet his needs whether he can hear us or not. It’s not his problem, it’s ours.

The reason I think Tom is deaf is because I can now walk up to him while he is napping/adding an abundance of fur to the furniture and he will just stay there sleeping. His ears will not twitch in our direction, nor will he stir in any way. I’m careful not to startle him but touching him when he’s sleeping but I do check to make sure he is still breathing. I don’t use a mirror to do that.

I woke him up by touching him a while back and it was the first and only time that he jumped up on all fours and hissed at me. Tom isn’t much of a hisser, he’s more of a bully. Over the years we’ve had a few dogs as guests and he just kind of puffs up and then walks over to guest dog and swipes them in the nose. The few times a cat has been in his territory he has screamed like a banshee, but he’s not much of a hisser. When he did hiss at me, he then recognized me and started purring and rubbing against me. I took this as some sort of apology. We made up.

Speaking of screaming like a banshee, though he can’t hear he still makes his needs known through vocal communication. The cute meow has been replaced by a shriek at seemingly ear-rattling decibels, especially when heard at 4:30 in the morning. In an effort to keep the blog family friendly, I will not use the words I have heard from others in the house when hearing these screeches. Despite these noises, I refrain from spooking him through touch when he’s sleeping. If we need to relocate him because he is in an inconvenient location (I know, shame on the servants for finding the king in an inconvenient location), I usually stomp on the floor, banging my foot hard enough on the ground to create a small seismic event. He then awakes and looks off in a completely different direction. I bang the foot again and he swings around and sees what’s up.

The other day I reminded him that he has another 22 years to go if he wants to outlive the oldest cat on record. We call her the “siamese wench.” She lives in Australia, and while she seems quite sweet on her YouTube video (which I can’t find using the iPad app) but Tom has his eyes on the prize.

Actually, I think he couldn’t care less, because he went and added some fur to the couch. 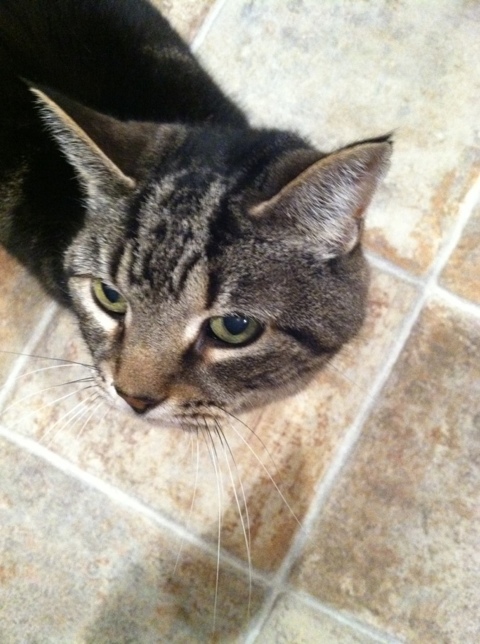