I took half the day off from work today. There were a couple of reasons for this, but the primary force for the decision was to get the results of my annual HIV test that I had two weeks ago today. I think that regardless of your sexual orientation or activities that getting a yearly HIV test is the responsible thing to do. It is a free test at the county clinics in New York State. Normally the test takes 10 minutes, but two weeks ago the clinic was out of the quickie tests so I opted for the old fashioned blood draw and anonymous tube of blood act. I had forgotten what it was like to have to actually wait for the results. I’m happy that she was so cavalier about the news when she told me. I could have had a certificate to share if I wanted to. Kind of like a USDA seal of prime beef, I suppose.

The visit to the clinic today was a study in social interaction for me. I was number 9 in the waiting room. Numbers 10 and 11 were two young guys that had apparently been recently released from a local prison. They seemed nice enough and talked about the drugs they used to do. One of the guys mentioned that he had broken into a house at Christmas time and stole all the presents. He sold the goods to fund his drug habit and it was the theft that got him the time in prison. The other guy talked about funding crack and serving time for dealing. I don’t know if they knew each other prior to their interaction in the waiting room, but there was talk about “having to be bi” in prison. I looked for the candid camera but Alan Funt was nowhere to be found. They said hello to me and asked if I knew anything about the festival being set up across the street. They liked my iPhone, they wanted to know if I was familiar with the Droid. We had a brief conversation.

I have to admit that I never thought that I would have a conversation like that. It was surreal but interesting in a way. The only threatening aspect of the whole ordeal today was the homeless guy that screamed about a pregnancy test. I don’t know what that was about.

To keep the afternoon interesting I then went to the Department of Motor Vehicles (i.e., “hell”) to return the plates that were on the Acura. The local DMV is in the train station. It is always a flurry of chaos and today was no different. Line jumpers, flying credit card receipts and screams of “you didn’t fill out the proper form!” added to the merriment. How I miss the two window DMV we had in my hometown. They were much more calm. The DMV here is your typical county run/New York State governmental agency. A whole lot of wheel spinning for a little bit of productivity. I survived though.

After I got home I was getting ready to go for a bike ride but then a major thunderstorm blew through. Tons of lightning, including a precise hit to one of the powerlines because the power was out for 2 1/2 hours.

Earl is in Buffalo, Scott is out being social (but not with prisoners) and Jamie is doing the things he usually does out and about so I’ve ended up being a geek alone this afternoon. I’m installed at the local Panera in front of a salad. I’m the one with the shirt that says “Genius Bear”.

I’m not really that cocky. 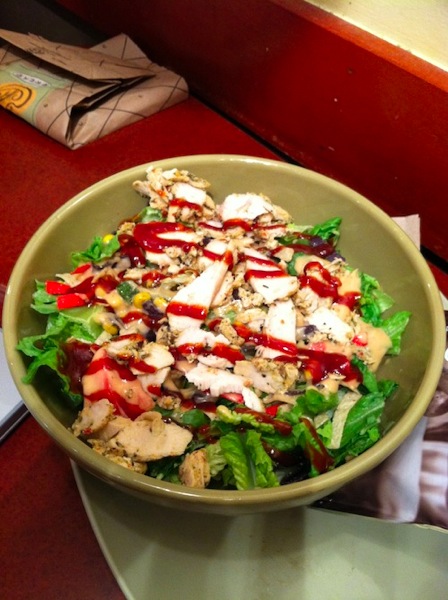