So Scott and I decided to climb Green Mountain after supper tonight. Actually, it was my idea to go for a nice sunset stroll straight up the mountain and he obliged to tag along. There was lightning way off in the distance, so we decided to keep the climb short.

We were warned of this (below) at the beginning of the path. (Click all pictures to make them bigger, all photos were taken with my iPhone.) 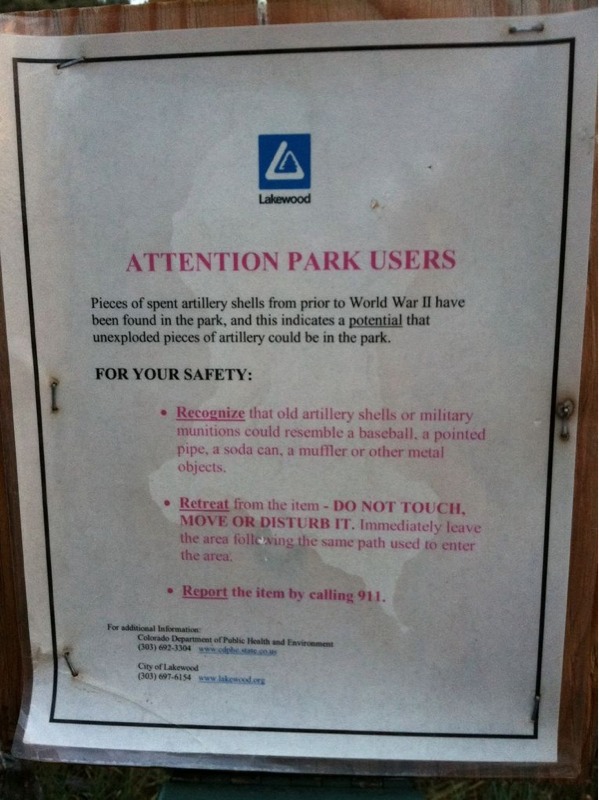 I snapped several photos along the way. Mostly flora and fauna shots. I love the vegetation around here but I have no idea what it is. 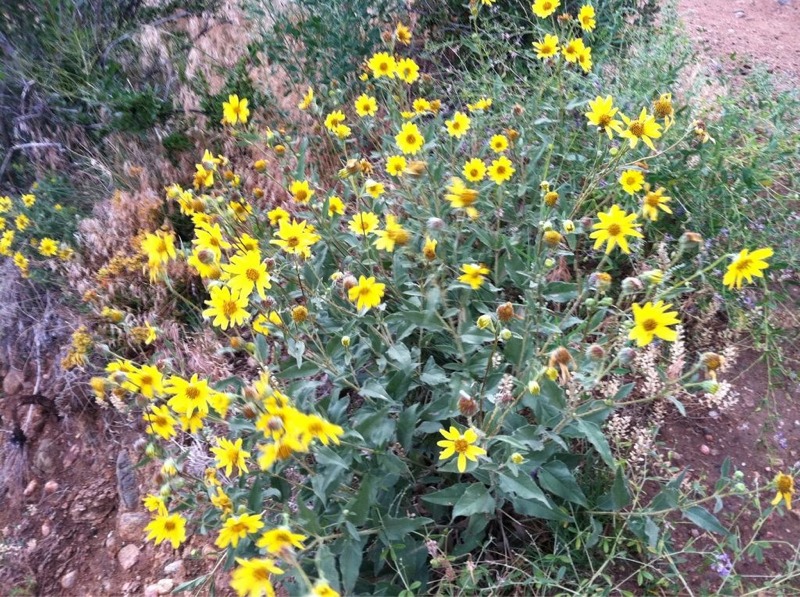 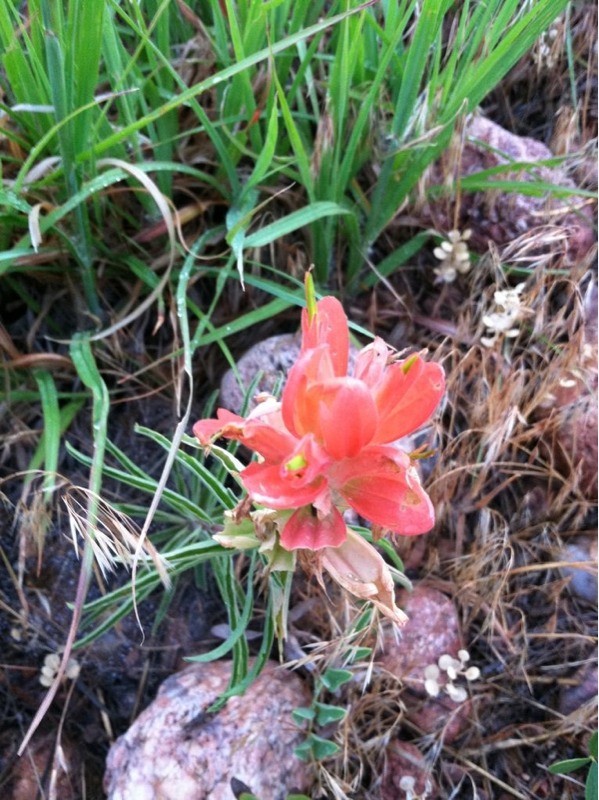 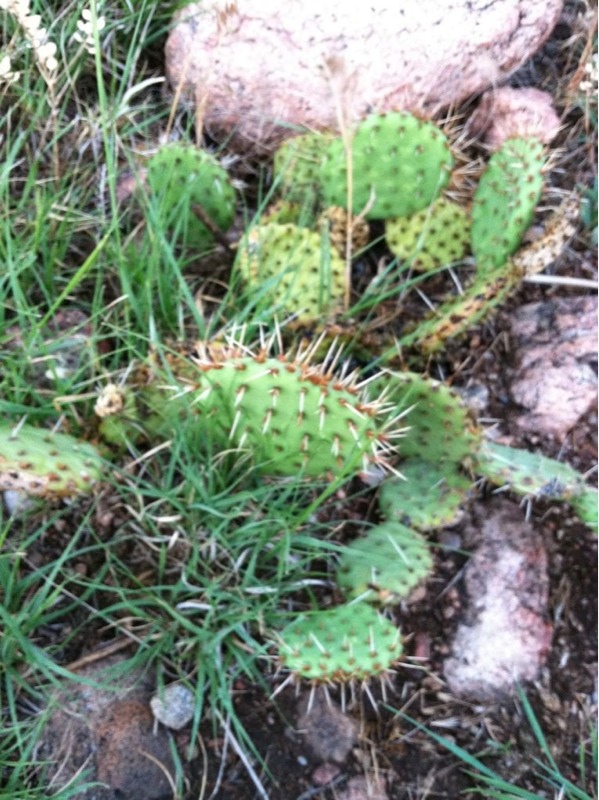 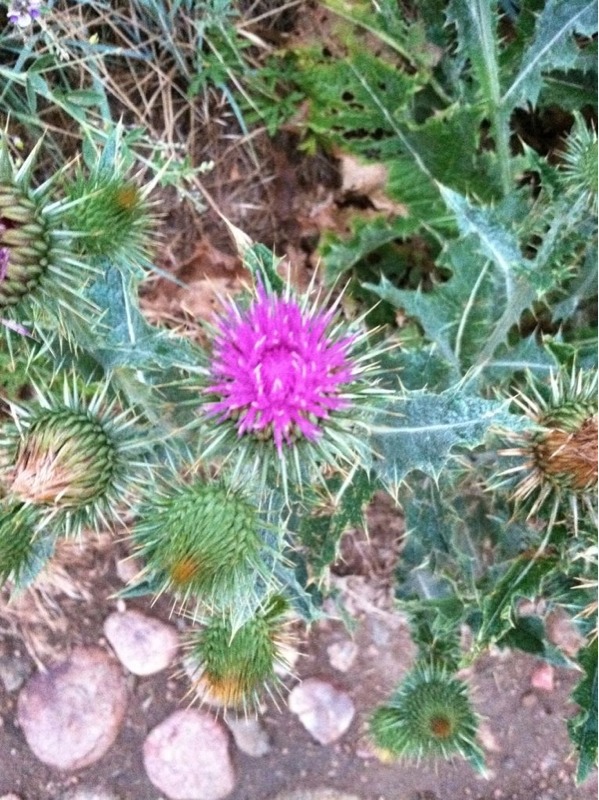 The view from the top of Green Mountain was quite impressive. 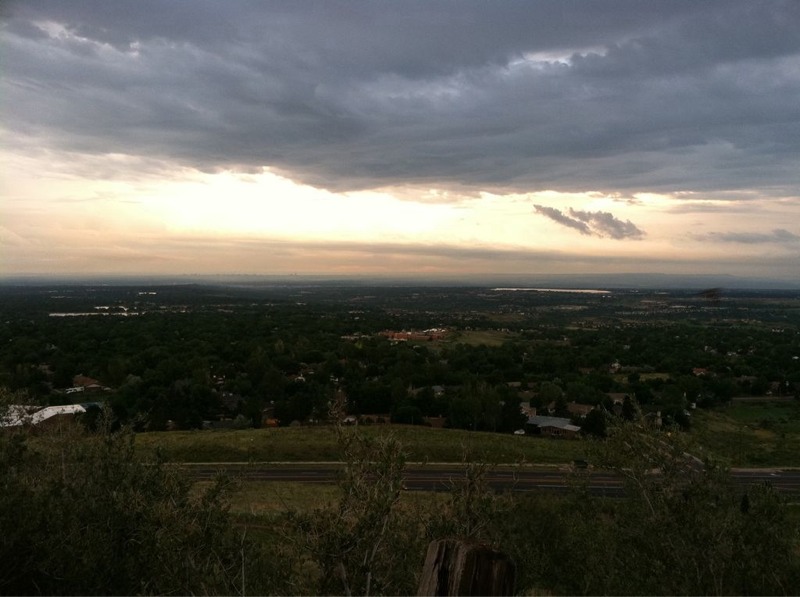 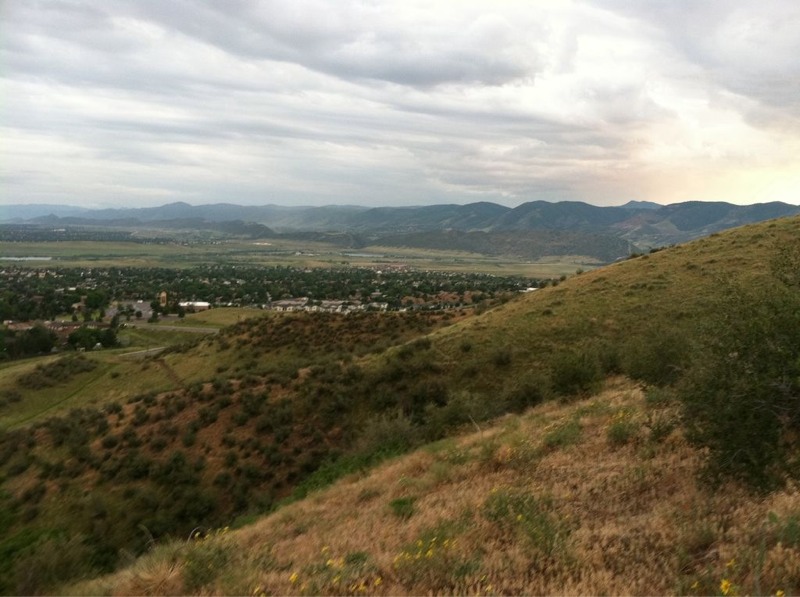 Here’s how high we were above the parking lot we started at. It took us about 20 minutes to get to this point. 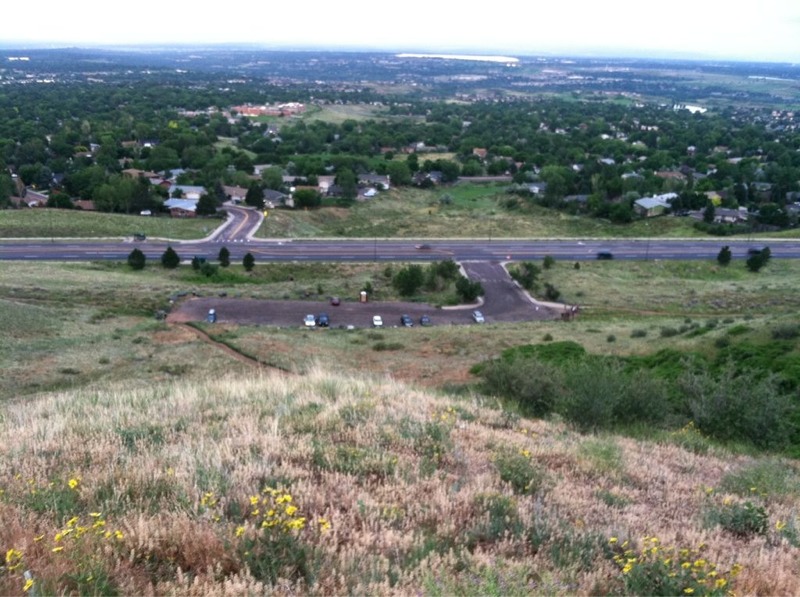 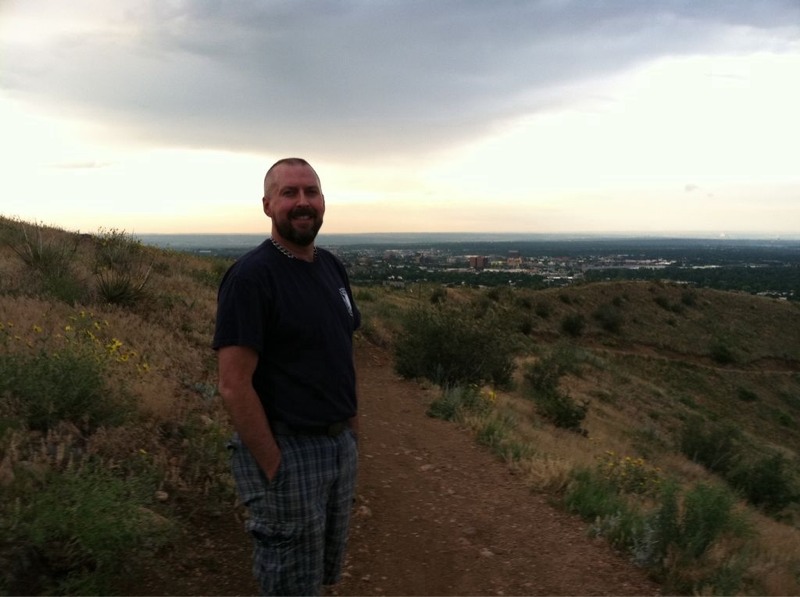 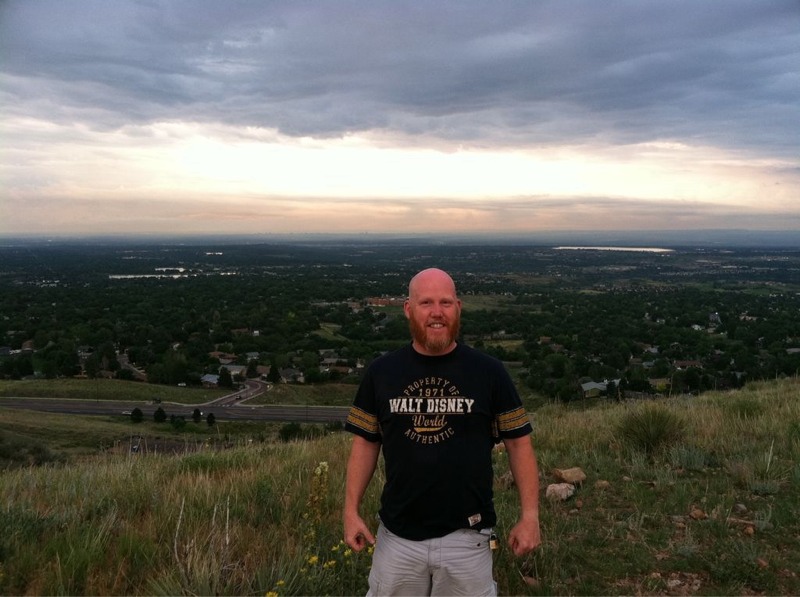 As we started hearing the rumbles of thunder, we thought it would be a good idea to get back down to the car and off the mountain. Shortly afterwards we were getting gas when I snapped this photo. 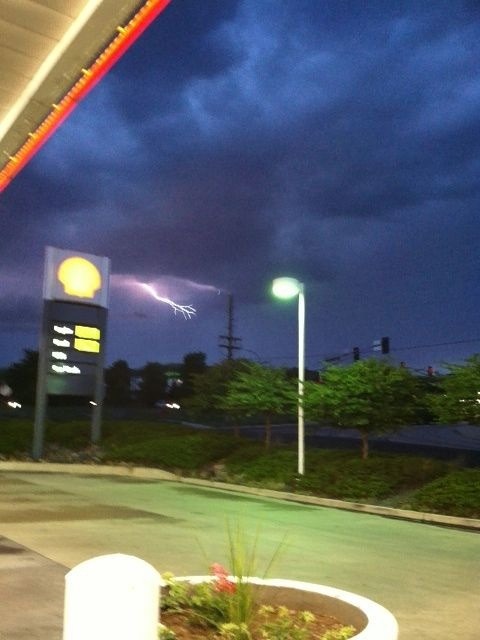 And here’s one more shot from the hotel room window after we got back. The power has blinked on and off a couple of times during this very impressive thunderstorm. 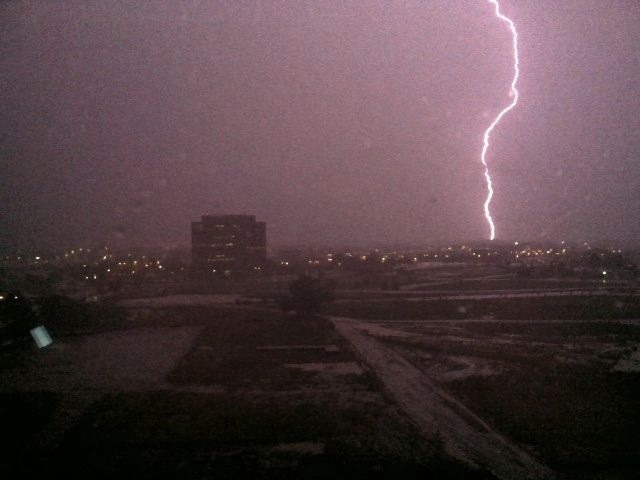 I so very much want to be a storm chaser. I wonder if storm chasing crews need a Linux guy.

Well apparently today turned out to be our shopping day. I’m sure it’s not going to be our only shopping along this vacation, but we took the opportunity to check out some of the local shopping locales to see how it compared to the offerings back home.

Our first stop was the Cherry Creek Shopping Center. I think it’s just south of Denver. The surrounding neighborhood was quite nice and this mall reflected the presumed tastes of the locals. The anchor stores include Nieman Marcus, Nordstroms and Macy’s. More importantly, they have an Apple store. We made a stop and took the obligatory look around, but didn’t find anything of interest, especially since some of the computer offerings of Apple are going to be updated as early as Thursday according to rumors. We did do our tradition of taking a photo using floor models. Earl posed with me in front of a really big iMac: 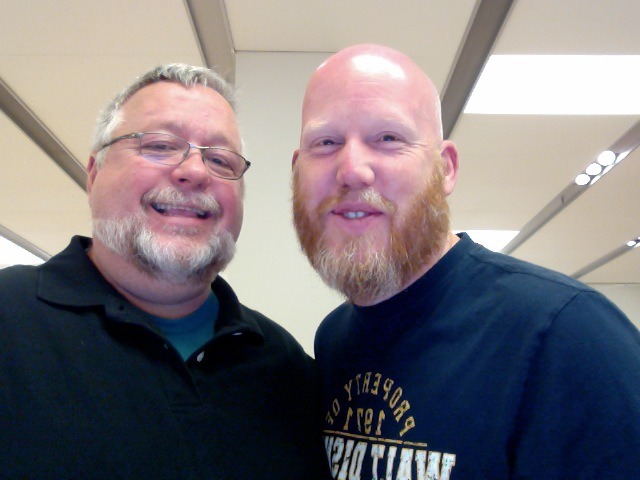 Scott posted with me in front of an 11-inch MacBook Air: 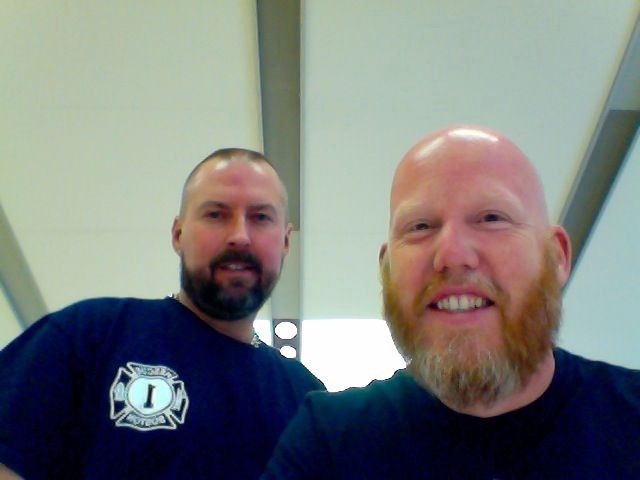 Interesting the difference in camera quality.

After the Apple store I went to the Zagg kiosk and had them put an Invisible Shield on my new iPhone. They charged an extra $5 to do it for me and I thought I’d live on the wild side and spring for the extra perk. While they did that I tried out the keyboard on their iPad case that has a built in keyboard and I decided it would be too cramped for any sort of serious typing. My current inCase with the standard Apple bluetooth keyboard will work just fine for what I want to do.

We took a look around the Oakley store where I promptly spotted a pair of sunglasses that I loved. All $260 of them. Way beyond the budget, we moved on and browsed around the rest of the mall.

We then headed up north of Denver to do some browsing around the area. We spotted a new concept store that I don’t think has caught on in our parts yet… 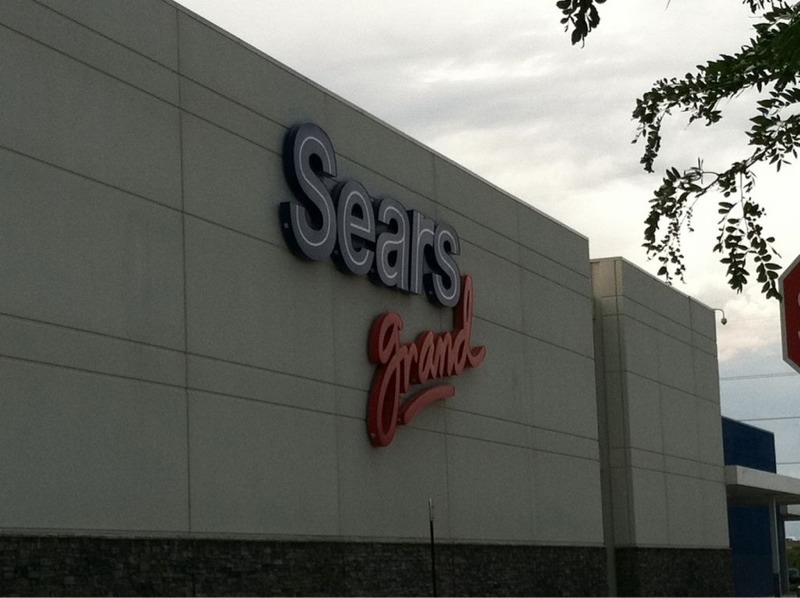 I’m thinking that since Kmart bought Sears (and renamed the whole outfit ‘Sears Holdings’) that they have been trying to find a way to bolster up the sagging sales of both the Kmart and Sears chain. I have to say that while I would very much miss what used to be the big red K with the little blue ‘mart’, I say that Sears Holdings should scrape up whatever cash they can muster and rip down at least 50% of their Kmart and Sears locations and replace them with Sears Grands. Wow. This store was huge, with all the offerings of a Sears store (clothing lines, hardware, optical, appliances, etc) and all the offerings of a Kmart store (including the pantry stuff) rolled into one very impressively designed and laid out store. Give the right locations and completely needed attention warranted, I think Sears Grand could give Target and Wal*mart a run for their money.

The interior of the store is more Wal*mart than Kmart or Sears, with exposed ceiling beams. The arrangement of the merchandise was quite impressive (Scott, the retail guy of the family, was impressed with the merchandising). The registers are across the front like in a Kmart, instead of being buried in departments like Sears but the checkouts were definitely the old Compu-add program that Sears began using in the late 1980s/early 1990s (yes, I am that much of a geek to notice that).

Here’s a shot along the back main aisle. 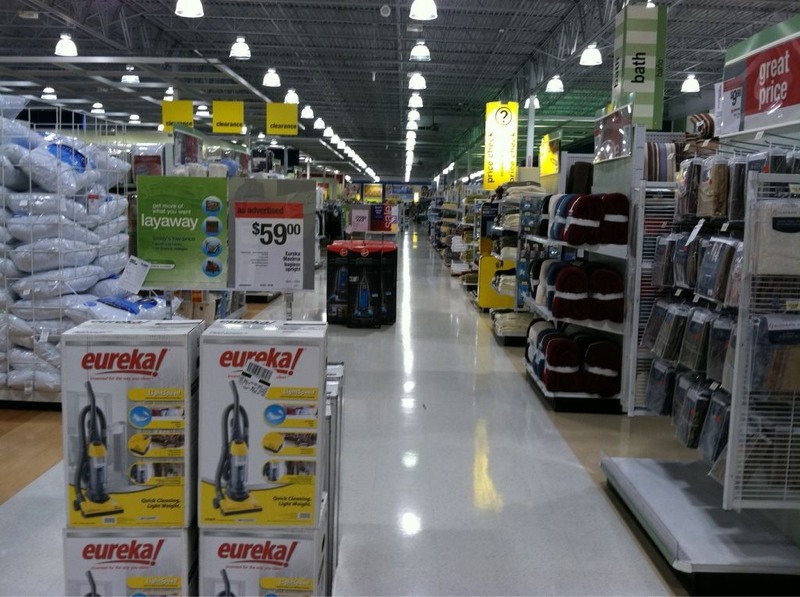 We picked up a couple of needed items, including cough drops because my body is still adjusting to the mountain air and my throat has been a little scratchy.

After the thoroughly enjoyable Sears Grand experience, we went to Chick-Fil-A. Yes, I know that the gays aren’t suppose to go to Chick-Fil-A because of the contributions they make to anti-gay groups and how they’re deeply routed in their religious beliefs, but if they don’t bang me on the head with a Bible when I’m ordering my meal and don’t have Bible verses printed next to the “Eat More Chikin” signs, I’m not going to gripe when I can have waffle fries. Besides, in a way I admire a company that stands on it’s principles and stays closed on Sunday in our ever changing world. No, I don’t agree with their beliefs but as long as they do their thing and I do mine we’ll be fine.

After Chick-Fil-A we went to Sheplers Western Apparel. I picked up a couple of pairs of Wranglers, one in blue and one in black, and a belt and a t-shirt. These “real” Wranglers are the cowboy cut and fit really good. Someday I’ll model them here on this blog thingee.

Now it’s time to enjoy the daily early evening thunderstorm that we’ve encountered every day since we got here. After that, probably a short sunset hike. I’ll probably take more pictures.