Yesterday I was sitting at one of the handful of traffic lights in the small city I pass through on my way home from work. It’s one of the few places in the town that has a right turn lane that is legal, most people choose to come up through the parking spaces on the street for a makeshift right turn lane. They must be in a hurry.

I noticed a PT Cruiser pulled up next to me. It was a black model and was in very good condition. It had the paint job where it looks like there’s bullet holes sprayed through the door panels. In the driver’s seat was a woman; I guess her to be about 70 years old. Her bleached hair was done up in a scarf. The scarf was leopard print. I could just make out the top of the blouse she was wearing; this was matching leopard print. Her glasses were of the cat eye variety and her lips were red. Well beyond the cougar years, at least the way I understand what that phrase means, I would say she was sort of a wildly dressed thin elephant. She was quite tan.

My first thought, which was a fleeting flash of thought, was “wow, what the heck is this old bat doing?” But after a few brief moments and a second glance at her appearance, I thought, “wow, you go girl.”  Many would say that her biological age suggests that she is past her prime. I think she is just extending it.

I like people that have the balls to express themselves, even if they are wildly dressed older women.

I occasionally wonder what I would be like today if I hadn’t been so hesitant and worried about what people thought of me. Would I be more apt to sing in public? Would I vocalize what I think are funny thoughts if I didn’t worry about whether they would generate a laugh? It’s been a while since I’ve truly given a damn as to what people thought of me; I might get a little worked up in the moment if someone is being particularly hateful, but I now know that anything that is said or done is fleeting and will be forgotten faster than you can say “squirrel!”.

Not to go on and on about politics, but I bet we wouldn’t have such a mess in government today if people were doing what they promised they would do when they were campaigning to be elected instead of doing what they think they should do to make people think better about them and get elected again. I think the folks in government should live life like many Americans choose to live it: live it for the moment, make that decision as if there were no consequences and do what you think is right, even if it doesn’t necessarily mean it’s going to make someone happy.

Expressing yourself. It’s a beautiful thing. I remarked to Earl that I miss writing in this blog like I did years ago. I bought an ergonomically correct keyboard tonight so that I will be more motivated to write when I’m at home instead of saving my writing time for that moment when I’m parked in a parking lot somewhere during my lunch hour, thinking how much I would love that chocolate chunk cookie but sipping on unsweetened iced tea instead. I like expressing myself through my words as much as I like expressing myself through my actions.

Describe a picture, even if it’s hanging on a completely different wall. And then don’t worry about what the others say or think. You’ll be glad you did.

Since the humidity has returned to the area and the sun is doing it’s best to turn the whole thing into a sticky soup type mixture, I found myself a shaded patch to hide in during my lunch hour. It is quite comfortable. 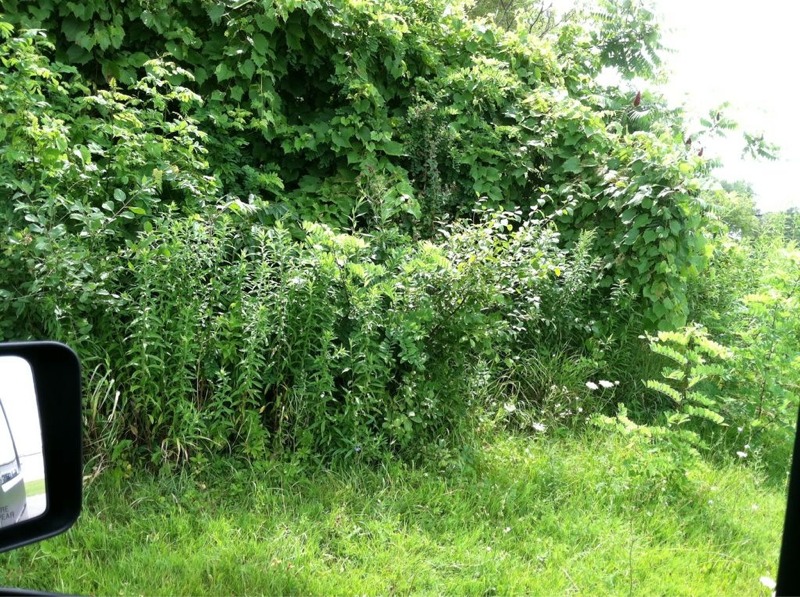 One of the things that I have noticed about this new vantage point is that it is situated directly behind the Burger King I mentioned yesterday. The drive thru here is quite busy. The McDonalds across the street has one of those newfangled dual drive thrus, where they make you think they can take two people at a time, but they really can’t. It’s just one surly person jammed into a back corner of the store who now has the responsibility of pressing a button to bark at either lane one or lane two. People think they’re moving faster. They’re not. I have noticed that quite a few folks are afraid to use the “outside” lane of the drive thru. Creatures of habit, I suppose. The nuggets still taste the same regardless of lane choice.

The seagulls are nowhere to be found today. They must have moved to the Burger King closer to their native land, having found a more habitual way to get their fill of fries.

Though there are no seagulls, there is a little purple flower sitting by itself in the brush that is providing the shade for me today. The flower is pointing downwards. Perhaps it has already done it’s duty of providing a means of pollination.

One of the life lessons I’m concentrating on lately is to separate my emotional response from my rational one. It is one of the things I admire the most of Earl and other key figures in my life. I remember so many folks screaming during a discussion in the past. I yell a lot. I’m not really worked up, I just sound it. Perhaps I should sound like I really feel.

Perhaps I should sound like I’m enjoying the shade.

Still in private beta and not opened to the masses, some tech journalists are declaring Google+ a failure because traffic is down slightly. These are the same tech journalists that were throwing tantrums and hissy fits because Google was asking corporations/businesses/”brands” to not use the service yet as they want to focus on the individual. Those that didn’t play by the rules were asked to leave. Perhaps the journalists who live on ad views and web traffic along picked up their toys and left. I suppose they’ll find another pool to be shallow in elsewhere. But I hardly think that Google+ is dead. Granted, my connections list isn’t huge over there but I’ve been having some pretty good conversations with others and I have met some people with differing viewpoints that have made start looking at very sides of a topic, including the debt-ceiling brouhaha. I’m finding myself not on Twitter nearly as much and my Facebook use down slightly (which wasn’t that stellar to begin with). I’m anxious to see where Google takes Google+. One just has to remember that they are an ad based company with really cool technology to do that first and foremost objective best. Once you keep that in mind, you can adjust your approach to the new service in the best way you see fit.