So last night it was Bear Night in Albany. Earl was unable to go so I teamed up with our friend greg and made the trek on a very cold wintry night. We met up with the iBears (Sean and Jeffrey, Dan and Roger) and a dolphin (The Spirit of St. Lewis!) at Red Robin for dinner. The dinner was great; it was good to see the guys again (it has been much too long) and meet Lewis. We then trekked over to Rocks. I thought it was kind of early since it was around 9:00 when we left Red Robin but I figured we stake out a spot with the guys, get started on the cosmos and observe the bears that were making their way through the door. 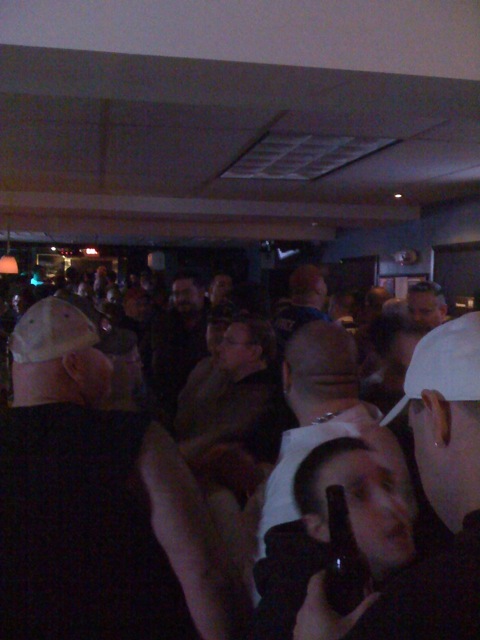 Since it early in the night and most bears don’t venture out until after 10 p.m., more and more guys (and two women at the bar) just kept packing in tighter and tighter. It got to the point where you could barely move in the place. Greg was stationed directly behind me; I could see the iBears and Lewis smooshed up against the wall between the two bathroom doors.

The iBears and Lewis made an understandably hasty exit and left to go across the street; Greg and I decided to brave it out for a while longer. It was then that I realised that we had ended up near the front of the place without any conscious effort, we were just sort of herded along. Greg went to grab the coats from the coat check. Apparently someone in that department was having some sort of hissy fit because he would not retrieve a jacket for anyone until he had to get five. “I’m not walking downstairs for one jacket!” So Greg stood there waiting until four others decided to get their jacket, and then the jackets could be retrieved. When the one with the hissy fit returned, he threw the five jackets at the nearest bears and let them figure out who’s jacket belonged to whom.

All in all we decided that we had a good time and enjoyed our adventure in the cold, dark night but I thought it would have been better if bear night had stayed at the Phoenix.

Perhaps it’ll be better in the summer when people actually want to use the patios under the stars.