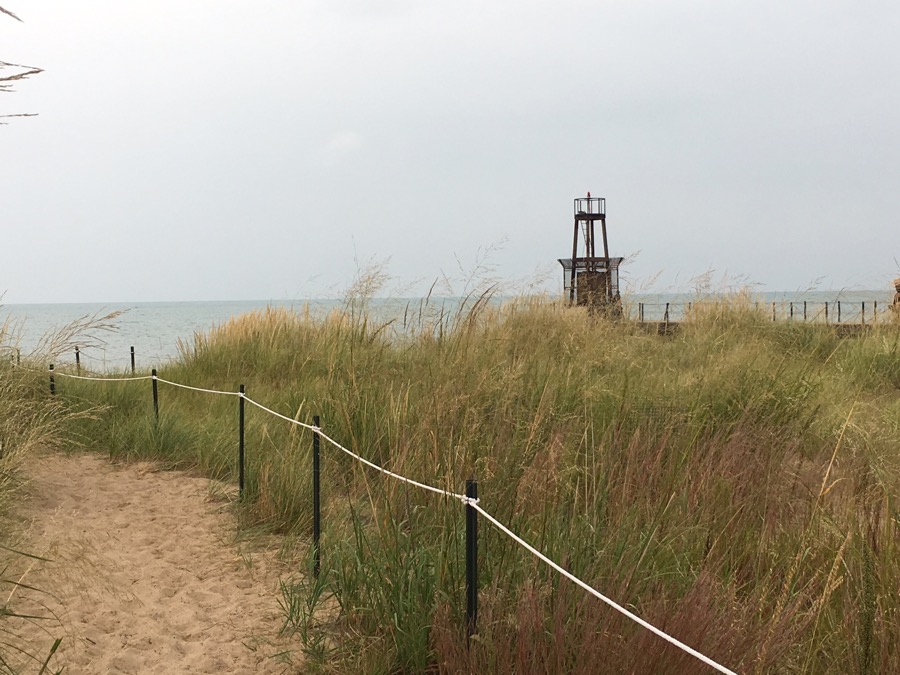 Earl and I ventured to Pratt’s Beach in Rogers Park for a relaxing Labor Day at the beach. Jamie and Chris joined us for a while. We sat on blankets on the ground and ate homemade sandwiches. 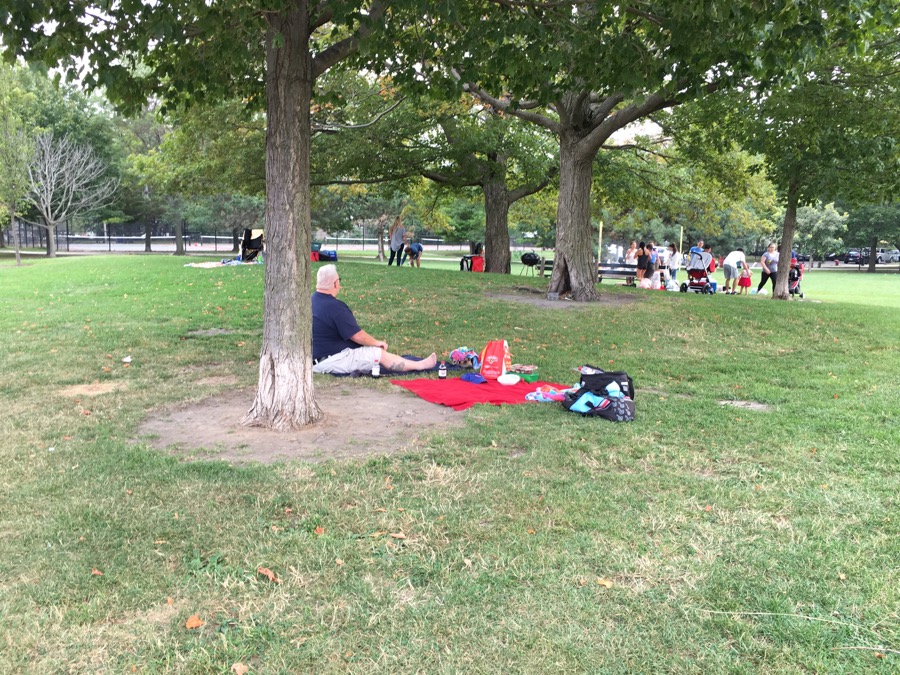 One of the things I love about Chicago is the blend of so many cultures without strife. Skin color, language spoken, styles of clothing, none of this makes a difference. In our short time here I’ve witnessed more blending than segregation. 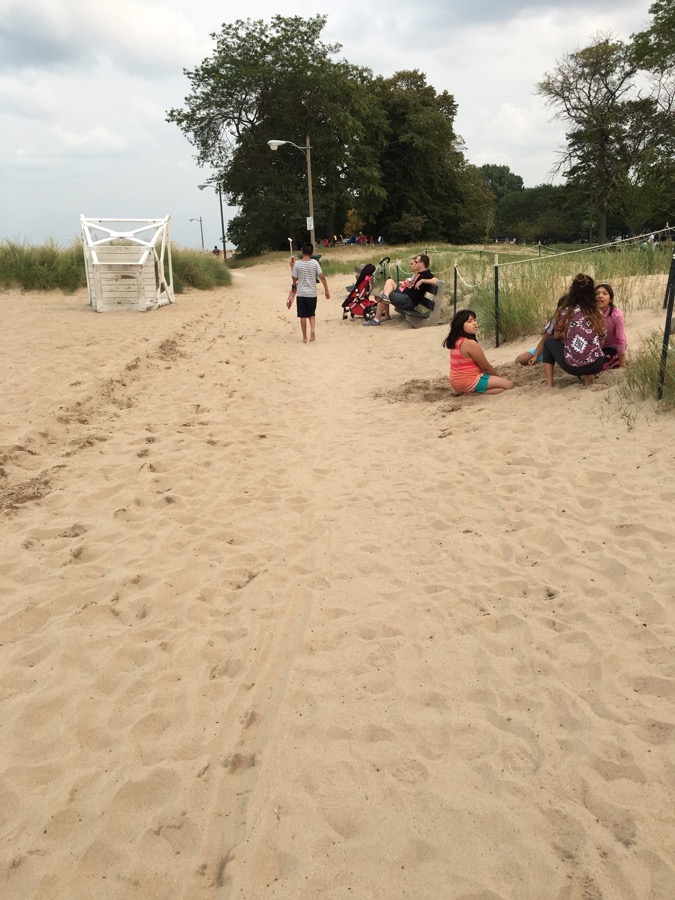 This beach is reachable by the ‘L’, Chicago’s version of the subway. We take the Brown Line to the Red Line and here we are. We drove today because we were bringing our picnic supplies. If I want to come here to clear my mind during the week, it’s easily reachable. 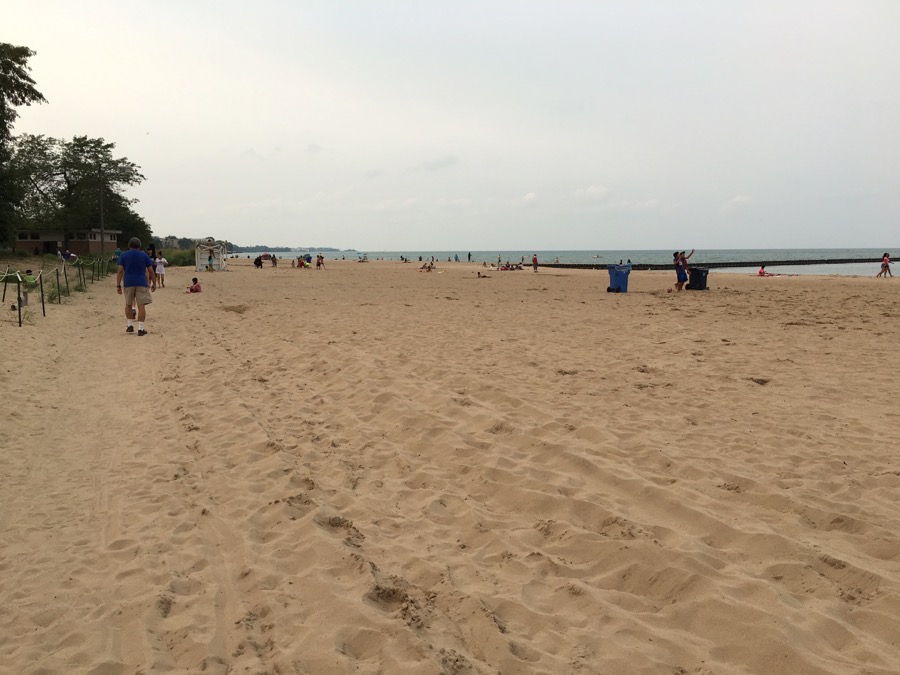 The varying types of music filling the air is interesting to me. I’m using the Shazam a lot to identify songs I would not normally hear. I like being exposed to new things. It’s part of what makes life great. 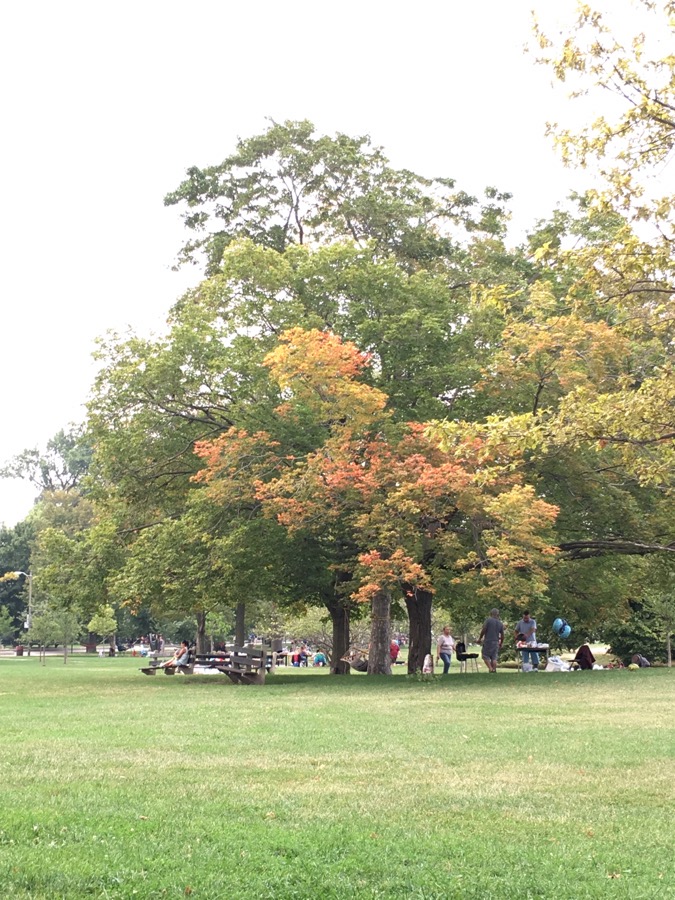 Since today is the unofficial end of summer, Mother Nature is starting to show just a hint of color in her leaves. For the first time in nearly two decades I am not feeling a sense of dread nor the “closing in” of the change of seasons.

I’m excited about the continuing adventure. 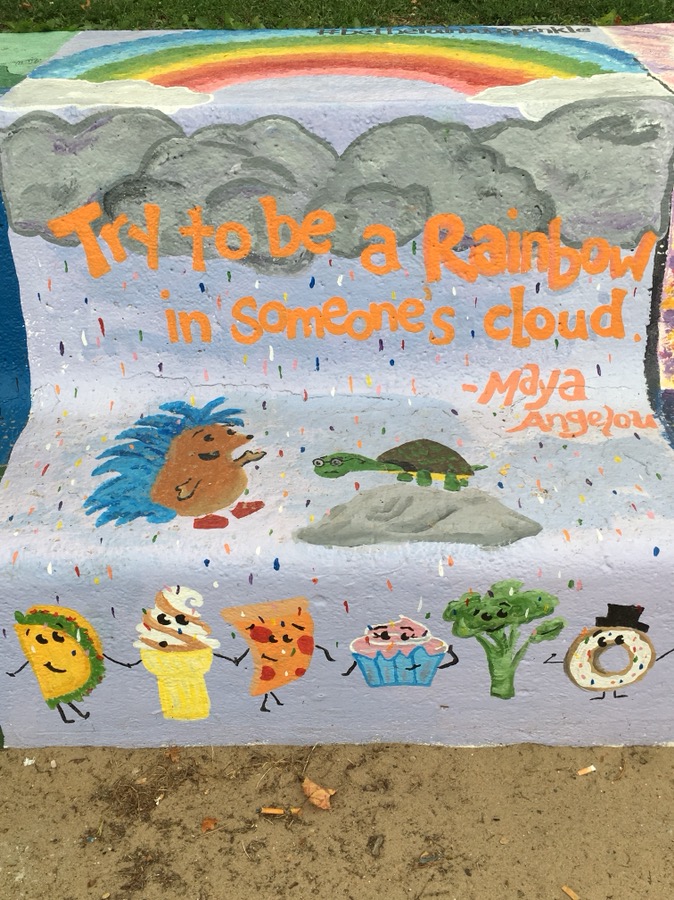 Words can not describe how much I enjoy the classic Taco flavored Doritos. 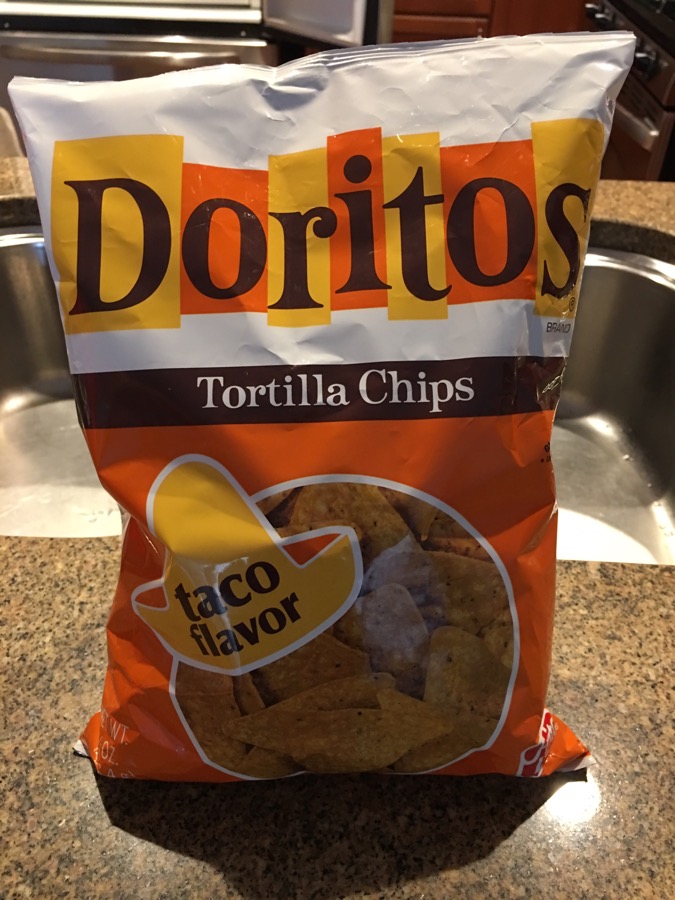 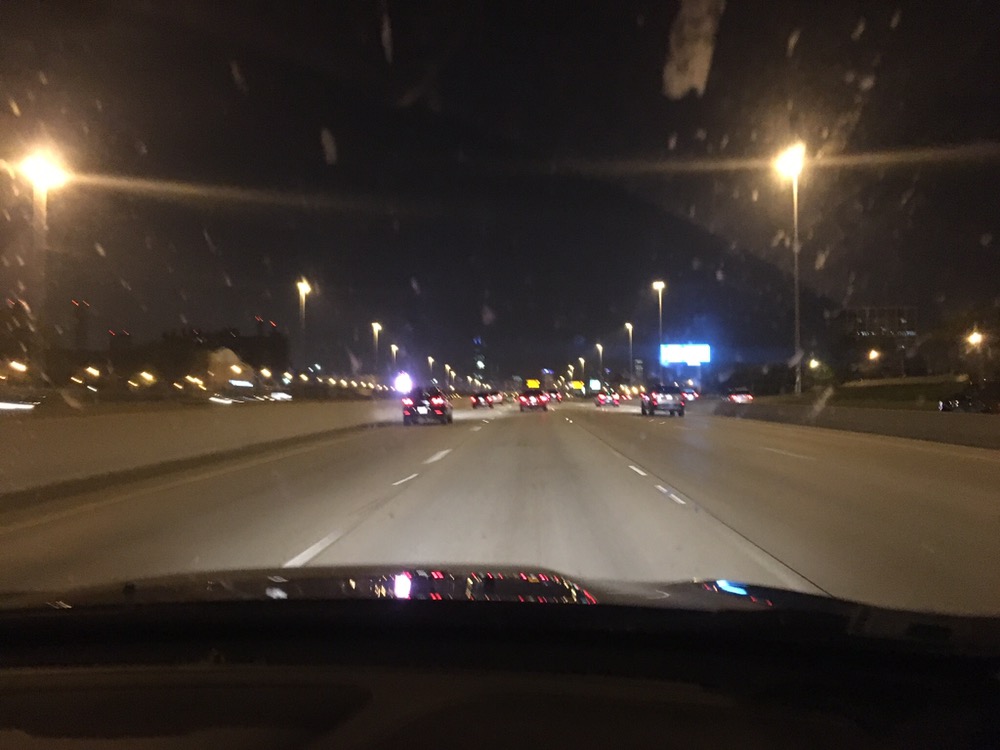 Many of my early memories involve cars. I can easily remember sitting in the front seat of a mid 1960s Chevy Caprice with my maternal grandparents. The ignition key was directly in front of me and I remember reaching for the ring of keys. Grandpa City gave me a ring of keys to play with as he sat in the driver’s seat, “are you gonna drive with me?” I can still hear his voice as plain as day. Grandma City sat to my right and off we went. I want to say the car was a dark blue.

I remember walking in the driveway of my paternal grandparents towards my father’s VW Beetle, which was parked along the barn (which was actually called ‘the hen house’). Everyone was happy that I was walking. It wasn’t long after that the Beetle was gone and he had a green muscle car sitting in the same spot. I remember Mom not being happy about the new car. “We should have talked about it first.”  A non-auto related memory from around the same era was when our mobile home was moved from a trailer park in town to the lot next to my grandparents’ farm. Grandma Country and I looked out the bedroom window at the lot where the mobile home would be parked. Shortly afterward Dad started building an addition onto the mobile home to add a bedroom, half a laundry room (dryer only), and a living room. I’m a little hazy on this but I think it was right before my sister was born.

Earl and I constantly go on road trips. It is a very relaxing and grounding activity for me and I’m sure that’s because of the memories I have surrounding cars. As we drive along, chatting,  I’m always reminded of the excitement and awe I felt on our first family road trip in 1976, when we took Grandma City’s oldest sister, my great-Aunt Ruby, back to Blackstone, Virginia after the annual family reunion. We took the 14 hour trek from the shores of Lake Ontario to Blackstone in my grandparent’s 1973 Buick Electra 225. It was a boat of a car and my sister, Aunt Ruby and I were easily able to sit in the back seat together. Aunt Ruby nodded off. I looked out the window in all directions. I remember spotting an exit sign for “P.A. 106” and I was confused as to why Pennsylvania was abbreviated that way. (Many years later I discovered it used to be “U.S. 106” and they changed out the letters but left the periods in place when the route designation was changed). I remember being excited about passing through Maryland on Interstate 81 in less than 10 minutes. We ate at a truck-stop diner just inside Virginia before finishing out trek to Blackstone. Aunt Ruby and Uncle Archie lived on a big farm in the woods with no electricity, aside from some car batteries wired together. She cooked on a wood-fired stove. There was a cuckoo clock in every room. They were very friendly. We ate a late supper after the farm chores were done for the day. Aunt Ruby talked to her vegetables on the stove as they cooked. “C’mon little peas. Let’s get cooking.”

When we pass cars on our road trips and I see children in the back seat watching a monitor or playing a game, or I see parents in the front seat intent on their phones, oblivious to the world whizzing by, I can’t help but wonder if they’re being robbed of future memories. I have watched the world around me for nearly half a century. I have no intention of stopping.

I will keeping adding to the memory bank and smiling as I watch the world around me.