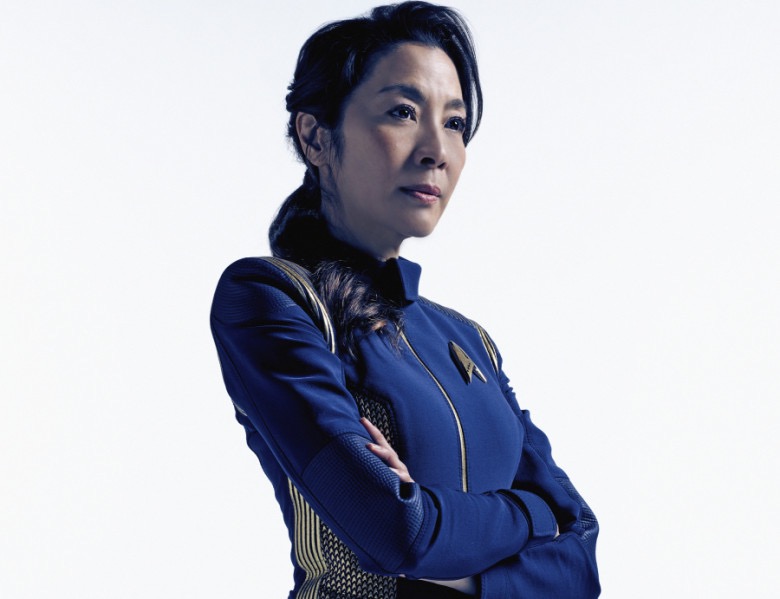 So Earl and I watched the first two episodes of “Star Trek: Discovery” this evening. I signed up for the trial of CBS All Access, the streaming service required to see the latest Star Trek television series in the United States, as the series won’t be shown on regular TV and it isn’t available on the other streaming services everyone else uses.

There may be a few spoilers in the rest of this entry, so if you’re interested but haven’t seen the episodes yet, you may want to stop reading now.

I’m not going to get into a heavy dialog about the plot details of the first two episodes of the series but rather just make some observations. As a life-long Trekker, I’ve enjoyed every iteration of the Trek franchise, aside from the latest Star Trek Movie. I feel connected to Star Trek. The vibe of Star Trek, especially Star Trek: Next Generation, has always given me hope that someday humanity would find our place amongst the stars.

The first two episodes of Star Trek: Discovery take place on the U.S.S. Shenzhou, with Captain Philippa Georgiou, played by Michelle Yeoh. First Officer Michael Burnham, played by Sonequa Martin-Green is at her side. She is Captain Georgiou’s Number One. Her protege. Her friend. I found myself connecting very easily to Captain Georgiou. I liked her commanding style, I liked her balance of ingenuity and diplomacy. As a viewer I found myself invested in the character. I was thinking, “yeah, she’s as cool as Janeway!”.

There were elements of the first two episodes that helped cement that we were in the Star Trek universe. The communicators sounded the same as The Original Series. The doors “whooshed” with the same sound effect. The transporter, when energized, sounded familiar. But the show does fail my Star Trek Transporter Effect test in that the special effects used are very Harry Potter looking. There’s glittering gold and wispy fairy dust going on. It’s illogical that a device used to transporter matter from point A to point Z as an energy beam would have wispy fairy dust sparkling about. How do we not know that wispy pixie dust isn’t part of a toe or an arm or some vital internal organ? It doesn’t go with the rest of the person being beamed in or out. And Federation transporter beams are white, Klingon transporter beams are orange.

And thankfully Discovery opened up with the word “Klingon” on the bottom of the screen because these aliens looked nothing like Klingons. They also sounded nothing like Klingons. They spoke Klingon, at length in episode two, but the Klingons are not the Klingons we’ve known from before. I could live with that, because Captain Georgiou was handling the situation quite well. I found First Office Burnham getting on my nerves by the second episode. She was a little too know-it-all, her upbringing on Vulcan notwithstanding. I just found her grating. I felt no investment in the character.

Then in the last five minutes there’s a huge twist and my investment, or lack thereof, in the characters on the U.S.S. Shenzhou was for naught. In the last five minutes of the show “Star Trek: Discovery” slides into “Star Trek: Millenial Strife” and the screen goes to black. After a few mandatory commercials, because after all, we’re suppose to PAY for CBS: All Access, an extended trailer ensues showing more Millenial Strife with the annoying Michael Burnham, a new ship, a new captain and lots and lots of battle scenes and talk about war.

The most Star Trek moments of the first two episodes: walking on a desert planet learning and discovering, attempts at negotiation, a seemingly true bond between a very capable Captain and her First Officer, are all just part of an extended back story. Episode three is apparently “like watching a new pilot”, per the show runner. The only way you’ll see it is if you absolutely pay for CBS: All Access.

Which I absolutely will not do.

I have no interest in watching a “Star Trek” series loaded up with extended space battles, dark cutaways, and lots and lots of Millenial Strife. It’s not my thing.

I’m sorry, Captain Georgiou, I was really liking the idea of an Asian female captain at the helm of a Federation starship. I wanted to watch you find your groove. I wanted to see where you would boldly go. And I think Michelle Yeoh was the biggest asset to the show to date. Her character was worth my investment.

And that investment has been cashed out.