Earl and I went to my 30 year high school reunion last night. The festivities were held in a remodeled, yet empty, bar/restaurant space along the main street of my hometown. There were 98 of us in the graduating class, 37 graduates attended the festivities. Earl and I had planned to go for an hour or two, we ended up staying nearly six hours and didn’t get home until midnight.

We had a hell of a lot of fun.

It was kind of cool being able to casually chat with members of the other school cliques without fear of being chastised in the cafeteria for stepping out of the assumed school hierarchy. There was only one classmates that I didn’t recognize. Several teachers and administrators joined us, as well as some folks from adjacent classes. As I said, we had a hell of a lot of fun. I made quite a few Facebook connections today.

As the class of 1986 grows older it’s good to know that we’re doing alright in the world. We’ve lost a few of our classmates along the way (may they rest in peace) but on the whole we’re not doing half bad.

I look forward to seeing them again; rumor has it that I’m helping organizing the 35th year reunion.

The class photo from 1986, on the steps of the courthouse. 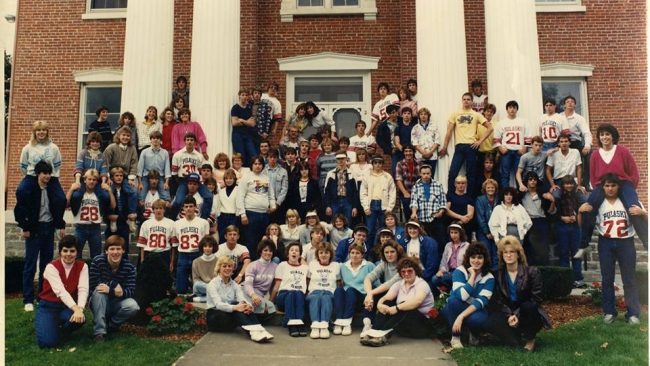 All of us on the same steps in the same relative spot in the photo last night. I couldn’t kneel down like I did in ’86 because of shrubbery improvements. 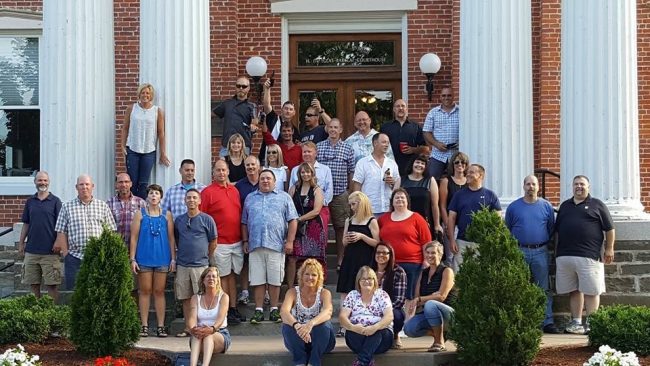