I went for my first bike ride of the year yesterday. The weather was rainy, the temperature was in the mid 50s and I hadn’t really planned on going for a ride until the last minute, but I felt determined and energized so I decided to go.

The rode for a little under 45 minutes, clocking in almost 8 miles in that time. It was not my fastest ride by any stretch of the imagination, but it was one of my earliest rides in any given year and despite being soaking wet when I got home, I thoroughly enjoyed myself.

We live in what is roughly the geographic center of New York State. Many years ago this “hub” location was chosen by the New York State Power Authority to bring many of the high voltage wires strung across the Empire State together. A couple of miles up the road from us is a big switching station, with guards and helicopters zooming in and out and large sets of power lines going off in all directions to the various corners of the state, neighboring states and Canada and the like. One set of wires headed to Niagara Falls passes about a third of a mile behind the house. Several times a year I watch helicopter pilots navigate along the wires as others on board do inspections of the towers, the wires and the surrounding landing. A couple of times I’ve seen guys in impressive safety suits walking on the wires. 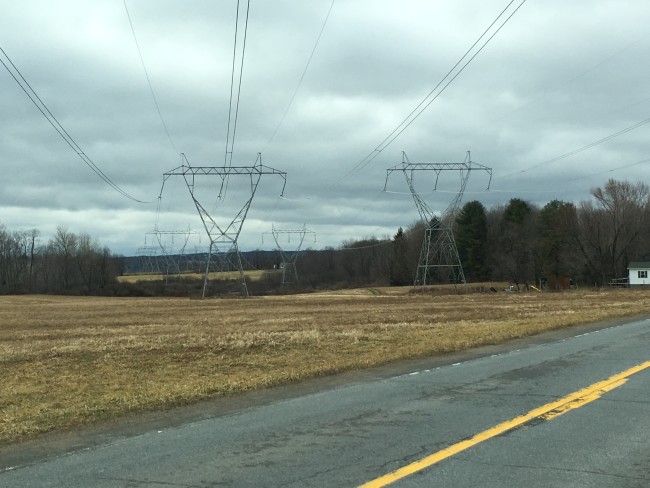 Riding up the wires yesterday I couldn’t help but notice the loudness of the “sizzle” I could hear coming from the wires. The spacers within the lines held the lines in place or the insulators that mount the lines to the tower were making a very audible “sizzling” sound, undoubtedly from the rain and the moisture in the air.

If you look really closely in the picture above, you’ll notice a neighbor’s play area in their backyard directly under the far right leg of the circuit crossing their land. I wondered about the safety of this, as well as the sizzling sound, so I spoke with a friend of mine who used to work up at the Power Authority.

The sizzling sound is not uncommon but is harmless. There have been a lot of studies of the effects of the electric fields generated by these types of lines but none of them specifically attributed any adverse health effects to the electric fields themselves. There may be a link between the creosote used in the wooden poles and health effects. I found this to be quite interesting. Another point of interest was that these two sets of wires that pass through our neighborhood are not the highest voltage of the wires in the area, that honor belonged to the wires that had due north to the Canadian border and Hydro Québec.

I’m tempted to take some fluorescent lights out to the field again like I did a few years ago to see if I can get to light up in my hand. I find electricity to be so fascinating, even when it’s making a sizzling sound.