This is quite awesome.

So this morning we left Harrisburg, Pa. and made our way down to Savannah, Ga. in around 11 hours. The drive was not unpleasant; I changed up the route a little bit and opted to try out something called “E-ZPass Express” in the Washington, D.C. area. This helped keep things interesting.

As we got closer to our hotel, we decided that we needed to get some supper. Ruby Tuesday usually has a decent salad bar so we decided on finding the nearest one. Apple consulted Siri on his iPhone 4S. I consulted Google Maps. Both agreed on the location right around the corner from our hotel. Earl used Apple Maps for navigation.

We decided to get with Exit 102. I exited, turned right onto US 80 and went 1.6 miles. I was then told to turn left onto Pooler Parkway. So far so good. Once on the parkway, we were promptly told to make a U-turn. On the parkway. I found a spot and spun the car around.

Proceeding in the direction we had just arrived from, Siri loudly proclaimed that we reached our destination. We were on top of the bridge over US 80. There was no Ruby Tuesday anywhere to be found.

To illustrate, see graphic below. We start at the yellow dot. We are going to point “A”. Siri took us along the makeshift red-line. 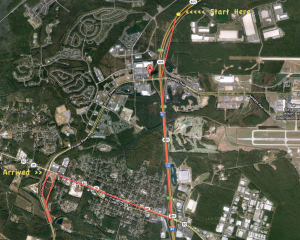 When we finally arrived at Ruby Tuesday, courtesy of Google Maps, I banished Apple Maps from Earl’s phone and installed Google Maps. I declared that no one in my family shall ever use Apple Maps again. Those who are smart will obey.

Apple really needs to get its act together.

Just for kicks, while relaxing in the hotel lobby, I asked Siri where Embassy Suites was located. Mind you, I was sitting in the lobby.

Siri told me that the closest Embassy Suites was quality Quality Inn Suites and was located on a road called International Blvd. 87 MILES AWAY.

Tomorrow we shall continue the trek.