Since the advertised WiFi is not working on this flight, I thought I would try something else along the line of “firsts”. So I’m having my first in-flight alcoholic beverage. 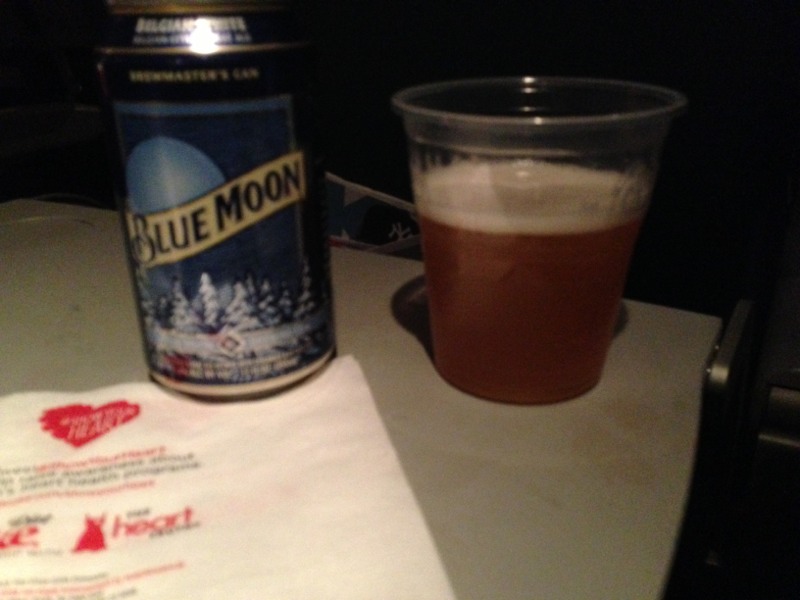 I don’t know the name of the flight attendant that is working coach, but he is a handsome gentleman and he apologized for not having an orange to include with my Blue Moon.

The food choices are rather limited. My supper consisted of a can of Pringles, two free Biscotti cookies, a Diet Coke in a leaky cup and this can of Blue Moon. I see the first class flight attendant walking around with a submarine sandwich. Apparently that’s a first class thing only. Someone is going to have to let me fly somewhere via first class someday. Preferably on a 747.

That will be a grand blog entry entitled “Firsts”. In the meantime, I’ll enjoy my first alcoholic beverage on a flight.

So I was all excited on my flight from Syracuse to LaGuardia because there was WiFi. I confirmed that there would be WiFi on the 3 1/2 hour flight from LaGuardia to Dallas-Ft. Worth. I would be able to do my surfing thing and actually accomplish some things I wanted to get done online.

It was when we reached 10,000 feet and we were permitted to use electronic devices that they informed us that the WiFi on this aircraft was inoperative at this time. So, I paid $9.95 plus tax for a day pass of WiFi when I could have bought a shorter pass for the first flight today.

I wouldn’t say that I’m pissed off about this, but I do find it disappointing. If you’re going to scream about WiFi on your flights, you should make sure that your WiFi is actually working. Geeks get hostile when they’re promised an Internet connection and they don’t get it. I have several tech friends that have two internet connections at home so that they’re never disconnected. I have contingency plans for our internet connectivity at The Manor. While I’m sure that Internet connectivity is hardly a priority on a commercial flight, I do expect a company to come through on their promises.

So, Delta Airlines, you disappointed me a bit on this flight. I’m on a regional jet for three and a half hours, there is no entertainment available (though the three women in row 11 are amusing in an irritating sort of way) and now we have no WiFi.

Such a first world problem I know. I should have commissioned the LearJet. 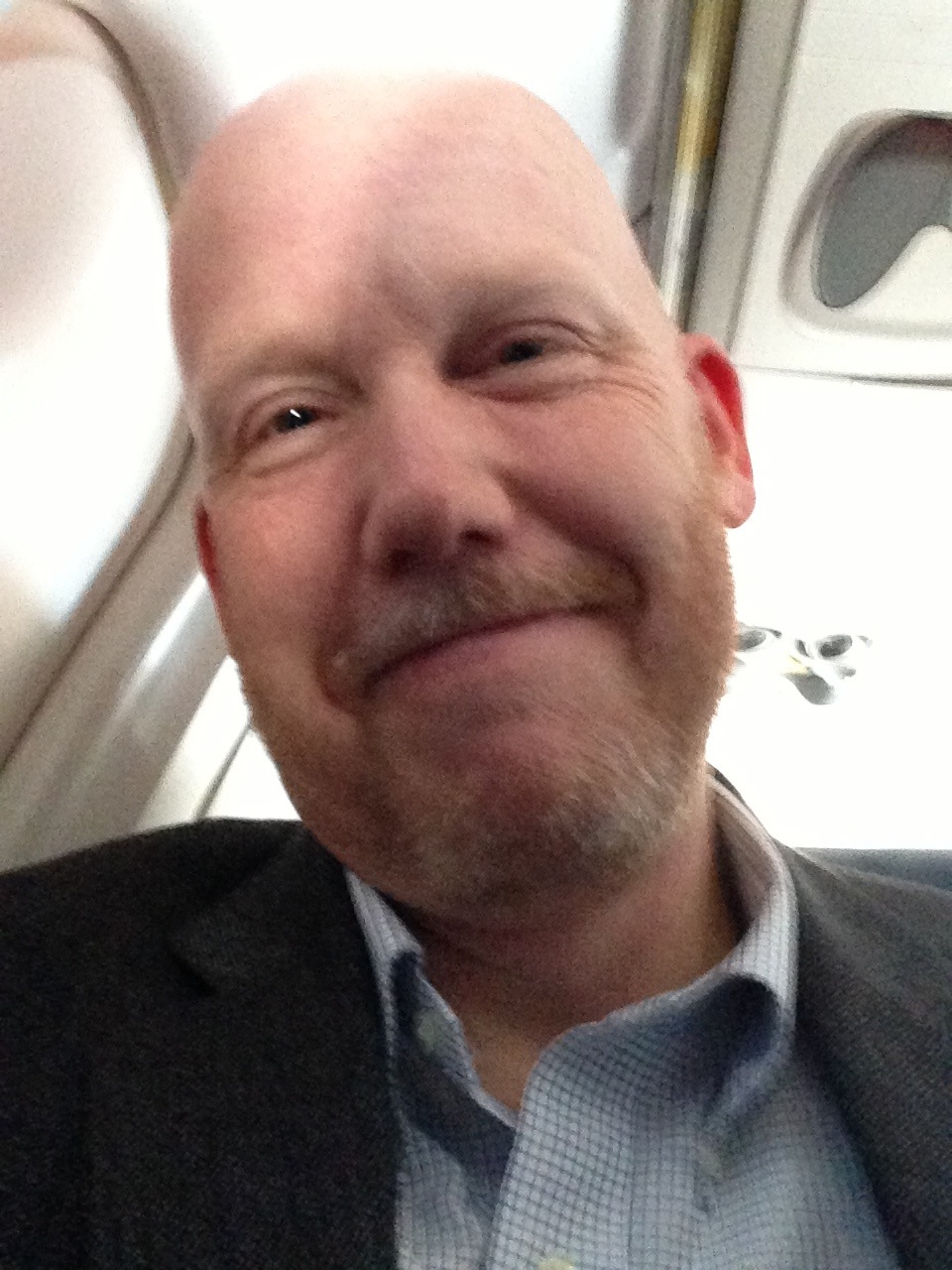 So this is my first time publishing a blog post using in flight WiFi. I’m kind of excited about it. I’m flying Delta today and I’m finding this plane (CRJ700) to be quite comfortable, especially when compared to the Dash-8s I usually fly out of SYR.

I’m a tech snob. This isn’t something to be described as a negative aspect of my personality, it’s actually something that I’m kind of proud of. With technology where it is today, I think that the right tools are available to do what the masses need to do. I also fully believe that if you’re going to embrace technology, you need to do it properly, with the best tools you can get your hands on. This is something that has taken me years to realize; saving money isn’t going to save you money in the long run.

About a year ago, when I found out that I was going to be on a more frequent work on-call rotation, it was suggested that I finally get a company mobile phone. I took this advice and filled out the appropriate forms and waited for the red tape to unwind itself a bit. Our company is aligned with AT&T, so I knew that my smartphone choices would be different than what I was familiar with on Verizon. I was fairly surprised when I was told that I couldn’t have a smartphone of anytime, but rather I had two or three choices of flip phones to choose from.

I ended up getting some Samsung flip phone that is so poorly designed that I have never used it. I have never given out my company mobile number to anyone, not even to the company. Instead, I opted to get a Google Voice number, which I can then direct anywhere I want to direct it.

Now, I’m not wasting company funds. When I am officially on-call, the Google Voice number is directed to my personal iPhone and to the piece of crap Samsung flip phone. The latter direction is just so that I have something audible to startle me awake should I get a call in the middle of the night. The piece of crap Samsung flip phone sits on my nightstand and does nothing even mobile related. The moment I am officially off-call I power down the phone and shove it away in a drawer.

The piece of crap Samsung flip phone doesn’t hold a charge for longer than 24 hours. It beeps and burps and chirps randomly at all hours of the night. I don’t know if it’s some sort of audible notification stating, “my battery is charged!” or what but it’s annoying. If I pick up the phone like you’re going to make or answer a call, I always hit the PTT button on the side by mistake which throws the phone into some sort of warning notification hell telling me that my PTT is going to charge me something. I don’t even know what my PTT Is. There is a constant notification on my screen stating that I missed a call on the 29th of December, even though I have pecked at the keyboard to get beyond this notification countless times. And did I mention that my iPhone has a better battery life than this thing?

The folks at work were kind enough to provide me with a holster to carry the phone on my belt. Sorry ma’am, but if I’m going to carry a holster that size on my belt, it’s going to have a Glock in it and people are going to be impressed, not laughing uproariously at me.

Through casual observation at work, I have noticed that most of the folks that you would think have a company cell phone actually carry a personal smartphone instead, with their company number forwarded to their personal phone. Most of the time the personal device of choice is an iPhone. Smart choices for smart people!

Flip phones were quaint back in their day but it’s time to move on. I don’t care if it’s an iPhone or an Android device, but in today’s business world where you need to be connected, you need to have a device that isn’t on the cheap and is going to do the job properly. Especially when you’re part of the telecommunications world.

Guess what I’m not packing with me for my business trip today.