So yesterday the weather radio blared out another Lake Effect Storm Warning. The National Weather Service predicted 4-10 inches of snow in lake effect snow bands and the warning included our area. I didn’t think much of it, these things are suppose to happen all the time in January in this neck of the woods.

This morning when Earl and I got up for work (at 5:30 a.m.), there was evidence that it had snowed a little bit. Earl said that it looked like “a little more than a dusting.” As I hopped out of the shower a half hour later, I noticed that it was snowing a little more than it was earlier.

After getting myself together and out the door, I started the trek to get on the Thruway. The roads were in pretty bad shape, but this is nothing out of the ordinary, as we live on a county maintained road. When I got to the state maintained portion, the conditions didn’t improve. In fact, they got worse. Popping the Jeep into four-wheel drive, I decided to truck on.

Twenty minutes later I was at the Thruway entrance. I had driven six miles in 20 minutes. Looking at the Thruway, which runs parallel to the freeway I was on, traffic was moving at about the same pace. At that rate, I’d get to work well into mid-morning.

I decided to turn around and head home. And this is the part where I get a little braggy: instead of hopping back into bed for an hour, I decided to just start my day. I was feeling good, I was in the mood to be productive and I actually was in the mood to work. So I sent an email off to those that cared as to my whereabouts and settled down to the day’s work. I’m glad I made the decision to stay back, it started snowing even harder and it continued throughout the morning. 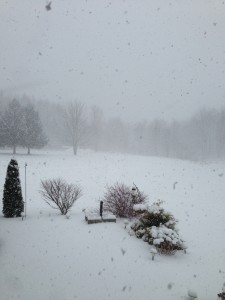 Snow falling. Photo taken through an open door, that’s the actual snowflakes in the air.

Now that I’m sitting in the kitchen enjoying my lunch, I’m noticing that it looks beautiful outside and there’s still a few flakes in the air here and there.

Winter ain’t so bad when you put your mind to it.