So I’m sitting on the couch in our Great Room trying to write code for a project that I am working on. I usually sit in the rocking chair that Earl bought me years and years ago, but Tom has decided that he should use the rocking chair during this part of the day and he shall not be disturbed. There are some rules that are not meant to be broken. So I sit on the couch trying to get into the zone while he naps in my zone. 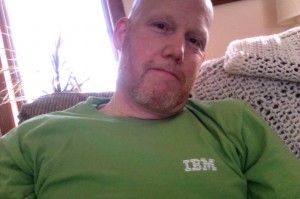 I have no idea where the shirt I am wearing came from. It’s a nice shirt and it’s the right size but I don’t ever recall being given an IBM shirt. I was given quite a few Apple shirts a few months ago, and I love them a lot, but I don’t know if this shirt was part of that lot or not. It’s quite comfortable regardless of how I got it and that’s what’s important.

To celebrate the snowstorm that accompanied hysterics of historic proportions, I grilled pork chops on the grill outside on the patio for lunch today. The members of my family found them to be quite delicious and cooking out in the snow as something I hadn’t done in a long, long while. I’m glad I took the effort to unbury the grill, shovel off the patio and spend some time outside. It has done wonders for my psyche. There is no replacement for being out in the sunshine, no matter how much Vitamin D one takes during this time of the year to combat Seasonal Affectation Disorder.

I’m really looking forward to our trip to Florida next month.

Earl is sitting in the kitchen working on our 2012 taxes. It is best to leave him be during this type of exercise because he’s really good at the financial workings of our home. Our financial approach is simple: I ask how much, he tells me, I ask which account, he tells me and then I push buttons on the ATM machine. That has worked for us for years and I really have no complaints with that. Since we live relatively debt-free (aside from the house and the Jeep) I can’t complain. If the answer is “no”, the answer is “no” and that is something that I can live with. I would rather live debt-free than get back into the ways of credit card debt that I had back in the 1990s (B.E. or ‘before Earl’). No one ever believes me when I say this, but I could easily adjust my standard of living accordingly if we ever had to. As long as I’m with people that I love and have the basics, I’m a happy guy.

Tom has readjusted himself in my chair in an effort to get as much fur as possible to every corner of the cushion. Everyone gives what they can.

I have been taking quite a few photos with my iPhone today and I plan on doing the same tonight. People probably find my random photos boring but I don’t care, I’m not out to impress anyone. I just like sharing slices of life where I can.