Originally posted on my Google+ stream. 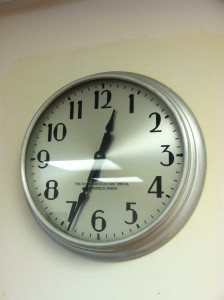 Today I added a new clock to my master-slave clock collection in the house. This one is from 1940. All of the clocks in the collection were made by The Standard Electric Time Company. The are minute impulse clocks, so the make that click-click sound once a minute that was common in American schools in the 20th century. They run on 24VDC and are controlled by a relay board connected to a Pentium II 233Mhz running Debian Linux. The program used to advanced the clocks was written in BASIC by me a couple of years ago and compiled using FreeBASIC. Uptime on the server right now is 340 days.

This particular clock hangs on the wall in my office, replacing a bigger version of one from the same era. It is a smaller, 9-inch model, which would usually found in small offices scattered through a school. Most classrooms had a 12-inch clock hanging on the wall. Gymnasiums, auditoriums, cafeterias, etc tended to have the 15-inch version.

I started collecting these clocks in the mid 1990s. I became fascinated with these clocks on my first day of kindergarten back in 1973.