So today I am thankful for many things, with it being Thanksgiving here in the U.S. and all, and I’ll probably write a few blog entries (okay, possibly two) where I share what I am thankful about with those that stumble across this bloggy thing. This will make my mother happy, because she often shares what she is thankful about at Thanksgiving. In recent years, she has urged, actually insisted, no demanded, others to do the same during the Official Thanksgiving Dinnerâ„¢ by not passing any food until someone said something that had some sort of meaning and another someone is sobbing in the mashed potatoes (or gravy, she’s not fussy) in an emotional turmoil because they have just shared what they are thankful about. My mother doesn’t just pull but she PULLS at heart strings.

I think I digressed.

Oh, and I sometimes write in an exaggerated manner and this could be one of those times, however, I most certainly assure you that yesterday’s blog entry was not written in an exaggerated manner and if I were to drive back to the hibachi grill right now, I would bet dollars to donuts (which I think has something to do with spending dough) that the woman is still banging on the ventilation hood and screaming for more sake.

Oh, my mother is a lovely woman. I think of her as groovy. But not gravy. I’ll introduce you to her sometime, she’d like that.

Back to giving thanks. In a world where bigger is better, apparently, I am sometimes thankful that my grandmothers are not here to partake in the calamities of what we call the Present Timeâ„¢ because quite frankly, I can’t see either grandmother trying to navigate themselves through a Wal*Mart (Always White Trash, Always). Grandma Country was a Pulaski Department Store kind of patron. The Pulaski Department Store was an establishment on one of the few corners “downtown” (I use that term loosely) in the lovely village of Pulaski, N.Y.1 that had everything you needed for your lovely country home. It was about 1/100th the size of a Wal*mart but I bet you could find anything there, just in a reasonable size. If she didn’t find it there, she’d make the trip to Watertown or Oswego and go to Westons or Woolworths, both big department stores for their time but mighty small in comparison. I guess she could have coped with a Wal*mart now that I think about it, but I don’t think she would have enjoyed the experience. She’d ask my grandfather for an assist. He’d yell and scare people. I like that approach.

Grandma City was about Ames (pronounced Ameses). Since she lived in the city she was more used to the larger department stores, but I don’t think she’d have an easy time navigating around Wal*mart. She found Wegmans to be big and that’s before Wegmans became big but they still sold things like shirts but they didn’t have a food court or anything. I mean, I could never see Gram hauling this thing back from the small Wegmans and having it sitting on the back of the sink in her kitchen: 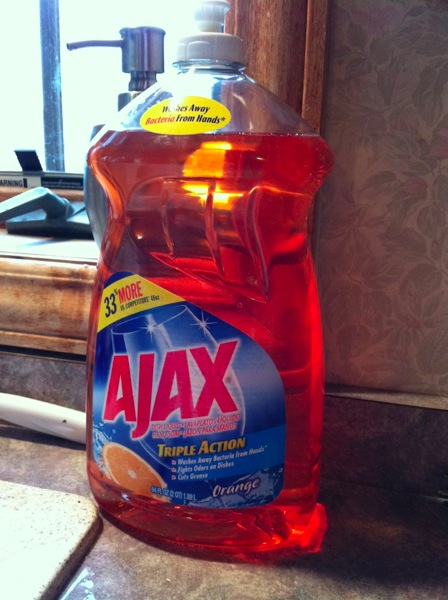 I mean, look at the size of this bottle of Ajax. This thing is huge. 33% More! Triple Action! The power of three! I feel Charmed!

Now I suspect that Scott purchased this during one of his clandestine trips to Wal*mart. We call these trips clandestine because he knows my feelings towards Wal*mart but he insists that there are things that he can’t get anywhere else so I look the other way when he breaks the house rule of going to Wal*mart without beingÂ inebriated. These trips usually take two people but one has to stay in the car unless the other is reduced to crawling. He usually goes under the cover of darkness.

When I see this bottle of Ajax on our sink back, I realize that Grandma City would have needed a bucket truck, or at the very least a small pickup truck or using one of the smaller cousins as some sort of winch, to pick up this bottle of dish detergent. And because she would never do such a think to one of her grandchildren nor does she know how to drive a bucket truck and it was Grandma Country that had access to the pickup truck, we would have ended up using paper plates for the Official Thanksgiving Dinnerâ„¢, which would have been lovely in it’s own way but not really what we would have enjoyed though we would have smiled politely.

And for that, I am thankful that we all live in our own time, make the best of it and then move on to our great reward.