So they were having this great deal on these little Asus Eee PC netbooks at work and I decided to jump in on the saving. Four weeks later, my new little netbook was sitting on the front porch waiting to be inducted into my little geekdom.

I dubbed it “scout-tux”. All of my Linux machines have tux in their name.

scout-tux came with Windows XP. I found this surprising, because not only is Windows XP 10 years old, but everyone has been telling me how wonderful Windows 7 is for these little machines. I decided not to care and loaded Ubuntu Maverick Netbook Edition on this little guy instead. Everything worked out of the box and he seems to be purring along nicely. Battery life was promised to be around six hours; he’s clock in around 3.5 hours. I can deal with that. He’s going to be a little test machine anyways, I use my iPad when I’m out and about on the road.

The built in webcam worked without any tweaking. I found this to be quite nice. The picture has that grainy quality of 2001, just like Windows XP, but I still like this little guy. 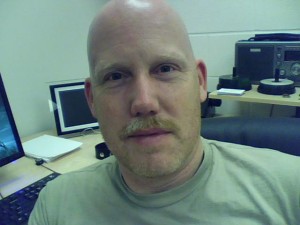