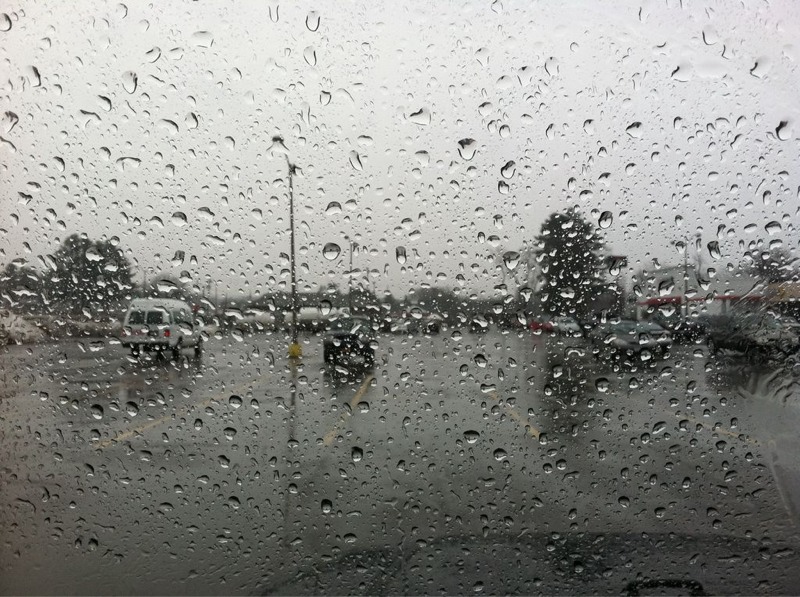 I am sitting in the Jeep enjoying a lovely early lunch hour on this beautiful Monday morning. Though Mother Nature appears to be feeling rather soggy today, I am feeling quite good. I think it’s because I worked out this morning. It’s amazing what can happen when you take time to move your body.

I am skipping the Dunkin’ Donuts iced tea today. I would like to think that this is the beginning of a trend, but I can only make this determination one day at a time. I have an unfortunate habit of expressing myself in absolute terms: “I will never drink iced tea again.”. This sets me up for failure. By declaring that intend to cut back on iced tea and then making a concerted effort of doing do, I have a broader sense of accomplishment and a smaller sense of drama. I hate drama. I don’t know why I’m so dramatic.

Earl has made me an egg salad sandwich today, which is another step in my constant quest form self improvement; I rarely eat egg salad and I never eat eggs, but it’s time to step out of the box and live a lit, especially if there is the promise of an olive.

I am situated in the Jeep in a different parking lot today because I was in the mood for different scenery. I am parked next to what used to be an Ames but is now a Dollar General. There is a Burger King about 2000 feet away but I can still hear the drive thru speaker. This is unfortunate because I can’t imagine how loud it must be for the driver that is sitting in of the thing. I just heard the classic “ya want fries with that?” over the sound of the rain. I don’t know how the driver responded.

On my way to this parking spot I heard the weather forecast and there was a mention of thunderstorms tonight. Since I no longer have that awful on call gig, I can rejoice once again because thunderstorms, tornadoes and other wild weather phenomenon is wicked cool, as long as you play it smart.

And last, but not least, the geek in me rearranged some of my web services this weekend. I now have a more cost affordable and simpler way of managing photos, music and the like. I will probably lose a point or two, but I opted out of Apple’s MobileMe because after all these years I still find it unreliable and slower than it should be. Dropbox, and apps that use Dropbox for storage, are on my radar now and I’m quite pleased. For example, I can take a photo on my iPhone and have it nearly instantly appear on my iPad. Prior to Dropbox I would have to sync with iTunes and drag things around. Now it’s point and click. This eliminates a few things in my tech costs, including the need to buy an iPad with a camera.

I’m happy with the toys in my toy box right now.