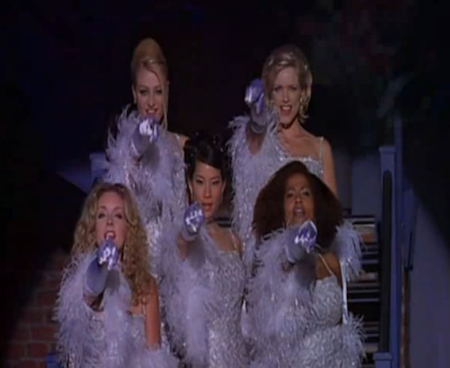 So today has been an on-call day and I have found myself with a lot of downtime. To pass the time between calls I have been watching “old” shows via the internet. It’s funny to call these shows “old” while remembering that Earl and I watched them together on their original run. I’ve been bouncing between episodes of “Charmed” and “Ally McBeal” with a smattering of a few other gems from the 1990s along the way.

One the things that I really miss about today’s television is the theme song and opening credits. I know the reasoning for eliminating the openers is to give the stations or networks more advertising time but the shows just don’t feel the same without some sort of opening theme at the beginning.

If I had to pick a favourite show that is current I suppose it would be “Private Practice”. I know what the show is about and I can tell the difference between the actual show and the gluttony of ads but it doesn’t have a brand identity. Now I know that they’re doing that dramatic thing by having the little sun explosion at a climatic moment near the beginning of the show and then superimposing “Private Practice” as an understated title on the screen, but being a 40+ year old something I expect more.

Now I don’t need something that tells me to sit right back and I’ll hear a tale nor do I have to hear the story of a lovely lady, but I like the titles to be consistent and separate from the action of the show. I’m not a fan of ramming the credits down my throat over the opening scenes of the show and quite honestly I don’t think it’s fair to the actors or production staff to be minimized in this fashion. In my mind a quality opening sequence gives the show credibility. I figure that the show must be good because they have taken the time, energy and expense to invest in an identity for the show. I suppose that the radio station program director in me is kicking in on the opinion here because I was constantly obsessed with coming up with a viable brand identity for any given station I was working on.

30 Rock still has an opening credits sequence and this is a great thing. Maybe there are more shows with opening credits that I’m not remembering at this late hour but I think a quality theme song helps a viewer remember the show and whether they liked it or not.

As the way of so many other aspects of the industry these days, I think ‘Hollywood’ is missing the boat by eliminating theme songs. Maybe they’ll make a return in 2010.