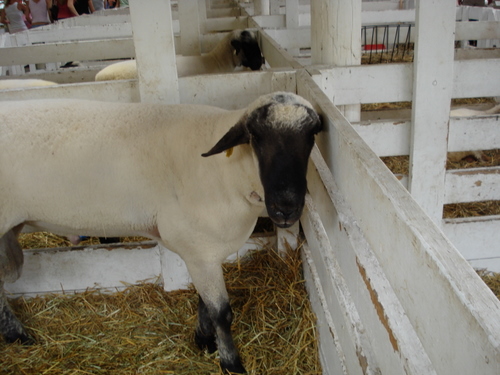 Earl and I made our annual pilgramage to “The Great New York State Fair”. Today is the last day of the festivities.

I’ve been going to the fair for as long as I can remember. What was a fun family activity for me as a child has turned into a fun family activity for me as an adult. As kids, Mom and Dad would load us into the car, stop at my grandparents to pick up my cousin Jean and then take us to the fair to enjoy all the exhibits, the food and maybe a few rides. Mom and Dad were quick to teach us that the rides weren’t the most important thing at the fair because there were plenty of other things to see and do, what with all the livestock shows, the Center of Progress building, the Horticulture building and whatnot.

This year Earl and I didn’t even go on the midway. I don’t think we were into it as much as we have been in the past or something because we both found ourselves irritated by the huge number of Wal*mart-esque people carts motoring around the grounds. Now this is going to sound particularly nasty on my part, but I couldn’t help by almost sneer at the woman who could have easily used TWO of those carts to move around eating a fried blooming onion*. When her pudgy grandchild (judging by age) went to grab a ‘petal’ from the blooming onion, she reminded him that she had fries and pulled away! To keep things interesting there were also several of the latest model baby-buggies without children being pushed around in a weapon-like manner.

Nevertheless, we walked through the barns so that I could chat with the animals and ask how the Fair was this year. Those that stayed until the last day seemed relatively happy, however, because it was the last day of the Fair many had already left and the farmers that live with their animals in the barn for the 10 days of the fair had packed up. I like seeing the woofsters in their living arrangements.

Earl and I also took a peek at the table decorating display and subsequent awards. I’ve always found this to be interesting. To think there are actually clubs out there that compete as to who can build the most impressive table setting based around a theme. This year’s theme was The Orient. I found many of the entries to be quite impressive but the judges didn’t agree: “The sizes of the mums contradict the size of the serving plate.”

And so goes another year at the Fair. In the spirit of tradition, we ran into my cousin Jean and her family which was nice. I’m always a little sad to see the Fair come to an end though, because it means that the end of summer is here.

Per wikipedia: “A single Blooming Onion has been reported as containing 2210 calories and 134 grams of fat.”