According to her official website, Brett Somers passed on on Saturday, Sept. 15. She was 83 years old.

Best known as a panelist on “Match Game”, Brett had a distinct cackle when she laughed that could be heard in most episodes of the show. She was the perfect comedic foil for Charles Nelson Reilly and the two would have great fun camping it up on the top row. Seen on other shows including The Odd Couple and Battlestar Galatica, she was married to Jack Klugman and while they separated, they never officially divorced. She had an off-Broadway one woman show as recently as two or three years ago. 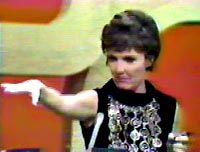 Note: I wrote a blog entry about this adventure last night, but for some reason my ISP decided to restore the hard disk the site lives on and they wiped it out, along with several other files I uploaded last night. I apologize if you experience deja vu while reading this.

So yesterday Earl and I joined my high school friend Scott and his partner Mark for “Out In The Park” at Six Flags New England. Here’s a little blurb from the Out In The Park website.

Out In The Park is a Gay Day event organized by a not-for-profit organization. We are a dedicated group of unity-minded people that are interested in creating events that are fun, all-ages, social opportunities for the Gay, Lesbian, Bisexual, Transgender, Questioning, Intersex and Allies community to Get OUT with their friends and family.

The events that we plan and organize are warm-up events to National Coming Out Day on October 11th. Our first event, Out In The Park, was held on Saturday, September 27, 1997, at what was then known as Riverside Park (now Six Flags New England). The focus of the events we plan and organize, is to foster a sense of pride, dignity and unity among the gay, lesbian, bisexual, transgender, questioning and intersex community and their allies through social and cultural events to promote diversity, visibility, awareness and acceptance throughout the New England region.

First the backstory. Scott and I were the best friends in high school. We went camping together, we went canoeing together, we had the same interests, we even shared a girlfriend (but not in a kinky way, ewwww). Around December 1988 we lost touch with each other. At the True Colors concert in Boston back in June we ran into each other and vowed to stay in touch. Summer schedules are very busy, so this was our weekend to catch up. Here’s a picture of us. 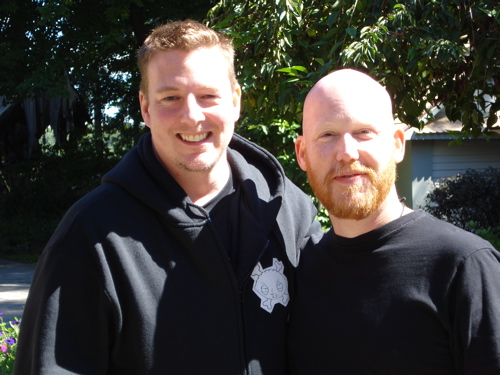 On Saturday night we met up in Hartford (after choosing between Hartford and Springfield, Mass. for a place to spend the night) and went to a place called “City Steam Brewery Cafe”. A brewery and cafe (hence the name), City Steam is a really great place to hang out in Hartford. The food was delicious, my one glass of beer was excellent (all beer is brewed by the owners) and the conversation was great. I highly recommend City Steam.

After dinner we walked and drove around Hartford a bit. We debated going to a movie but ended up at Club Polo, a local drag bar. We left before the show but we had a few drinks and just talked and talked and talked.

Yesterday we went to Six Flags, got our special Out In The Park wristband that got us into the picnic lunch and show if we wanted and then hit the rides.

Mark is a bit of a roller coaster nut, so the first ride up was Superman. I ended up riding in the front seat by myself and while the ride was quite enjoyable, it was the most harrowing of roller coaster rides I had ever been on. I loved it. I felt like I was hovering a little bit when I tried to walk away from the ride.

After Superman we went over to Scream, which is like Disney’s Tower of Terror but outside and facing away from a tower with two other people, so you have the sense of nothing around you. Freefall is fun with friends! Here’s a picture of Mark and I and a young girl that got to hear me scream. 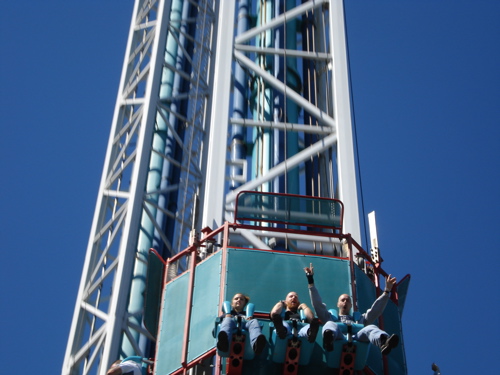 We then headed over to the picnic grove where there was an Out In The Park picnic lunch. There were a couple of cool things about Out In The Park. First of all, it was an official Six Flags event. Secondly, because of the traveling to bear events, Hillside, etc. that Earl and I tend to do, we ran into quite a few people that we’ve met along our adventures. This prompted Scott to comment that we get around. Well!

I tried to take my first self-snapped photo of four, but it didn’t work out so well. 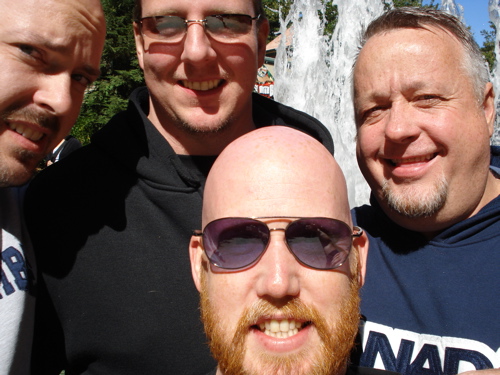 So a nice man offered to take a photo of us near the fountain at the picnic grove. 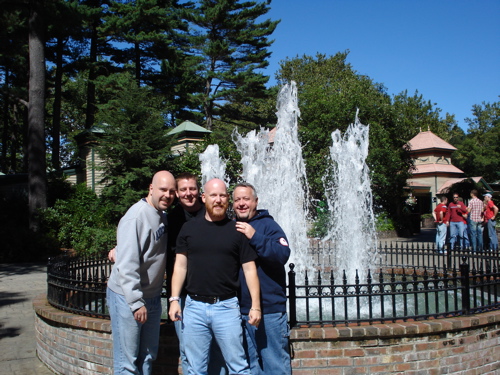 After the lunch we went back to the rides. After an extremely bumpy ride on one of the wooden roller coasters, Mark found the ride we wanted to do. I had noticed this ride earlier in the day, which looked like a giant spatula with too ends that someone would flip end over end in the air. I called it “The Spatula” or “The Fly Swatter”. Turns out its called The Catapault. Mark wanted to ride so we sent him on his way, in which he reminded me that he rode Scream, so I should go. So off I went.

“The Catapault” has eight rows of six on a platform. There’s two platforms at each of the long arm. When everyone is strapped in and restrained so tightly that bladders are starting to leak, they raise the arm up 50 or so feet and then spin it around like a baton at 30MPH. Our side went forward first. Then it stopped and we went backward while the others went forward first. During the pause between the two spins, Mark told me that he tends to pass out on rides like this. Luckily, he didn’t. I thought I might from my bladder being squeezed but everything held itself together.

To be honest, “The Catapault” didn’t bother me at all. I thought it was a thrilling ride and I would ride it again in a second. I’m not sure about Mark though. Here’s a picture Earl snapped when we got off the ride, I think Mark is faking the smile. 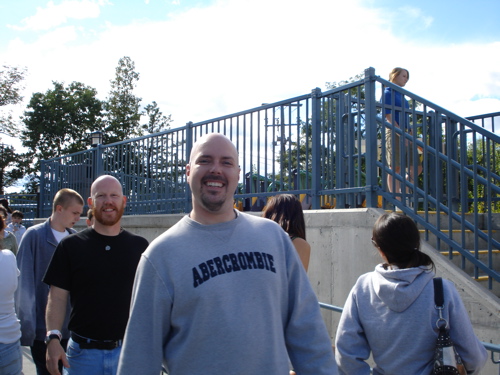 I loved the Out In The Park experience. It was great to see all types of gays and lesbians (bears, circuit boys, lesbians and their families, etc) mingling with the regular Six Flags crowd. Everyone was having a good time and there were no open signs of hostility.

It was also great to get together with Scott and catch up on old times and reignite our friendship. We’re not going to lose touch with each other again. It looks like we have another reason to visit Boston!