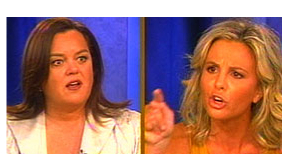 As a huge Rosie O’Donnell fan, I was delighted when Rosie joined the cast of “The View” in September and have watched the show this entire season. I knew that sooner or later she was going to really bump heads with Elisabeth since they have such opposite views on politics and today they stepped their arguments up a notch. Today they went full tilt.

First of all, I have always found Elisabeth’s way of arguing, by spewing out the same facts over and over again while another person is talking, excessively grating. She doesn’t shut up. She doesn’t let Joy talk. Rosie is also loud but she knows when to ramp it back and let someone else speak. Elisabeth just chatters on and on and Earl has to stop me from yelling “SHUT UP” at the television screen.

I found it odd that the producers went to a “split screen” for the first time this season making me wonder if this was somehow planned, at least on the part of Elisabeth, as today is the last day of sweeps. But that’s just the cynic in me.

There were two delightful moments later in the show that I did enjoy: Alicia Silverstone came out for her interview and completely ignored Elisabeth when she greeted the other hosts and at the end Rosie, with Joey Fantone and Laila Ali, asked if the two guests would consider going on a celebrity version of “Dancing With The Stars”, “you know like celebrity Survivor where they ask all the good ones to come back” (Elisabeth wasn’t on celebrity Survivor, perhaps she turned it down, but I thought it was a nice jab.)

Rosie is on vacation tomorrow (it was pre-planned as it’s her partner Kelli’s birthday) so everyone will be up in arms about that but I can guarantee that I will once again have no interest in “The View” once Rosie is gone.