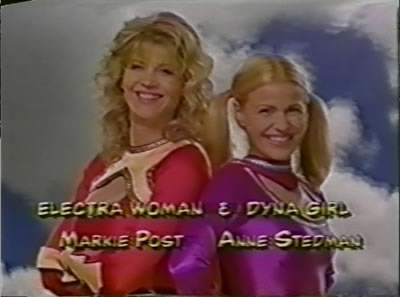 I’ve mentioned that my favorite Saturday morning program from my childhood was The Shazam!/Isis Hour, which ran on CBS between 10 and 11 a.m. After Isis gave her moral of the story and flew off to another adventure, for a while we had to quickly change the channel to ABC to catch “ElectraWoman and DynaGirl”, featuring Diedre Hall and Judy Strangis as the female superhero team.

There were only six or seven episodes of EW/DG made in the 1970s and ABC ran them over and over and over during the Krofft Superhour (or something like that). The effects were super cheap and the show was campy in the spirit of Batman and Robin. Fun Saturday morning fare.

In 2001, a 15 minute pilot was made for Fox, intended to bring EW and DG to prime-time. In this pilot, DynaGirl had run off with ElectraWoman’s husband. ElectraWoman (as Lori) was divorced, an alcoholic and a bit of a floozy living in a trailer park. A college student she had rescued when she was a young girl tracks her down to make an appearance as EW and finds out the state of her life. She convinces her to become ElectraWoman again and joins her as the new DynaGirl. In this pilot, ElectraWoman is played by Markie Post and DynaGirl is played by Anne Stedman.

My own copy of this pilot arrived in the mail today and I’ve already watched it twice. The show isn’t half bad. It was produced by Sid & Marty Krofft and is bawdy as all get out. It’s really fun to watch. It’s a shame the show wasn’t picked up as a series.

Electra-Terrific! A new DVD for my live action superhero collection.

I’ve mentioned to Earl on a couple of occasions over the past month or two that I would like to play football with some other like minded guys sometime. I’ve mentioned that we need to go to a bigger city and get on a gay football team or something and just hang out and have some fun.

As a youngster I was always terrified of the sport, because after all, I was a ‘band fag’ and they don’t do sports. Finally, twenty-five years later, I feel secure enough with myself that I could play in a football game and actually know what’s going on and maybe get a little bit dirty and banged up blocking people. Earl says he throws a mean football and I’m anxious to have him show me his technique this spring.

I never would have imagined myself on a football field actually playing the game. Now I can’t wait for the opportunity!

I can’t imagine that drinking anything that is colored pink can be good for you in any shape or form. What have they done to the old laundromat favorite of Tab?

Next they’ll color Fresca navy or something. And what in the world does pink taste like?

A: Tab Energy has a “pink, delicious taste.” Beyond that we’ll let consumers describe it for themselves.

I have a question that doesn’t appear on the site FAQ. “How can an energy drink be low in calories?” That doesn’t make sense to me. For energy, you need a good supply of calories. Something natural like a vegetable. Perhaps a potato. Maybe even pasta.

Drink some iced tea or something instead.