Well I finally got serious about working out tonight and moved my “exercise gear” out of the computer room and into the basement. Everything is arranged nicely; CD player strategically mounted with workout music like “Baby Love” by Regina, “Everytime You Touch Me” by Moby and “Come To Me” by France Joli. I picked up these workout shorts that are suppose to make you sweat a little more than usual while you’re doing your thing, and I have an old computer strategically placed so I can watch a workout DVD or web feed when the timing is right.

From time to time I rant about the apparent degradation of the English language. Of course, there are probably many Brits that think we’ve destroyed the ‘real’ English, and they’re probably right. But it seems that as time moves on, the use of proper grammar is becoming more and more rare.

I’m not perfect. I’m not a perfect writer. I’m not a perfect speaker. I make mistakes everyday when it comes to my use of language. But here’s some chestnuts that I’ve heard or read in the past 24 hours that would have me tearing out my hair this morning if I had any hair to pull.

“Go ahead and unplug it. After it has resetted, you should be all set.” Ugh.

“I’m going to go to my supervisor and conversate with her regarding this.” Why conversate when you can converse? Which leads me to…

“I have to orientate him tonight.” Sounds kinky.

Then we have the daily loose/lose and desert/dessert confusion going on. People! “I need to lose a few pounds so my pants will be loose.” “I’ll have two desserts when eating in the desert.”

I’ve complained about this before. I know I have. But hopefully someone, somewhere will read this blog entry and say to themselves, “perhaps I can speak English more goodly.” Then they’ll do something about it.

Looking out the window, it’s a beautiful day. The sky is a brilliant blue and there’s just a hint of wispy clouds floating about. It’s near picture perfect.

Except that it’s cold. Very cold. Last check it was 19.

With February wrapping up this week, I’m feeling a bit of cabin fever. I’m ready for the warmer weather and all the outdoor activities that come along with it. I’m ready to awake to the sounds of birds singing a sweet little tune. It looks like spring wants to make an appearance today with all her bright sunshine, but it doesn’t feel it right now. But it’s comforting to know she’s lurking just around the corner.

Oh well, I can always stand by the window and soak in the sunshine that way. Even if I have to give the thermostat a little spin.

Well after sleeping almost 10 hours last night I can say that I’m feeling better this morning. I awoke around 6:45 a.m. to find the sheets soaked in sweat, I think that means my fever broke which has to be a good thing, right?

I’m still not feeling 100%, but I’m definitely headed in the right direction.

For a person that refuses to get sick or even acknowledge any sort of sniffles, I’m really sucking at being healthy this weekend. I’ve had the sniffles since Friday night, hoping that extra rest would shoo them away so I’d be on my game for work this week. As of right now (Sunday, 7:48 p.m.), my head is pounding and I feel feverish. We don’t own a thermometer, since having one would admit that you get sick, but I’m guessing my temperature is around 99, which is high for me since I usually cook at 95 or so. Now that I think about it, I don’t know why my temperature is always so low but it always has been. So 99 for me is a fever.

Earl and I drove to Dick’s Sporting Goods today so that I could pick up some equipment I’ve been researching online. I’m ready to start working on building muscle now, since my weight loss has gone well, so I eagerly picked up some stretchy bands (sorry I’m not too technical), some weights and a chin up bar designed to hold up to 300 pounds and possibly decapitate anyone over 6 foot 7 inches.

I really want to work out tonight! I really do. But my subconscious, and further research on the internet, is telling me that I should hold off until I feel more like more normal self (cooking at 95 or so).

I was really trying hard to ignore this cold today. Earl and I cleaned the downstairs, caught up on laundry and made the trek to the mall. I was hoping that I could say “Ha! I’m not going to be sick!”

Alas, the abs will have to wait a few days.

Last week a bunch of employees at a Nebraska meat packing plant (I’m sorry, but that sounds like such a depressing job) won the largest PowerBall jackpot ever, clocking in at around $315 million dollars. That’s a lot of dough.

New York doesn’t participate in PowerBall, but we do have the “Mega Millions” lottery here, which is basically the same thing, only different, kind of like Pepsi and Coca-Cola.

By the way, if I’m drinking soda, I prefer Pepsi.

Earl and I, being the gamblers that we tend to be, actively play Mega Millions when it gets up into the three digit million numbers. We figure that if the universe is going to have us win, we’re going to win big so we might as well save our bucks up and go for the gusto.

We go to extremes like that in almost all facets of our life together.

I also play in the shared tickets at work. I hate to see what happens to the company the day after we hit it big on a shared ticket, especially since our entire division is playing!

Anyways, like most folks I’ve often daydreamed about what we’d do with our winnings. Earl and I have signed a contract to the universe stating that 10 percent of the winning amount, before taxes, would go to a charity, most likely Rosie O’Donnell’s For All Kids Foundation. We’d also go out of our way to make sure all of our family members were well taken care of and able to live comfortably for the rest of their lives.

But what to do with the rest?

I’d like to take a portion of the remaining money and invest it in quality children’s programming. I’d like to resurrect non-violent Saturday morning shows. I’ve mentioned numerous times that I’m a huge fan of “Shazam!” and “The Secrets of Isis”. I’d like to see programming like that, perhaps with a bigger budget than they had the first time around, updated and brought back to the living rooms across the country. There would have to be some tweaking to hold today’s kid’s attention in this rapidly paced world, but I think with the right elements, it can be done.

On the flip side, we’d probably use a portion of our winnings to further gay and lesbian causes, especially for those rural gay teens that think they’re freaks and not worthy of a quality life, simply because they’re gay.

The world is a scary place these days. If I had a million dollars, I’d like to make it a little less scarier.

Earl and I have finalized our plans for the grand Jeep tour in May. We are passing through 18 different states, not including the “repeats” on the way home.

The trip is a little over two months away, but I’m already counting down the days.

Earl and I ventured out as Mother Nature blessed us with a lot of wind, a lot of snow and a whole bunch of cold. After a successful jaunt to the local casino, I snowblowed the driveway and got ourselves organized and then went to the local mall. I was hoping to buy a pull-up bar so I could work on my upper body exercises, but there wasn’t one to be found. Since the weather wasn’t cooperating, we couldn’t drive to Syracuse or Albany, so I guess my killer upper body will have to wait a few more days.

We stopped for a quick bite to eat at a local pub (I hadn’t been there in 14 years or so), and then we decided to stock up on groceries so we wouldn’t have to venture out tomorrow.

Here I am grabbing a small can of almonds (for protein!) Notice I’m standing near the Splenda. I find that quite ironic, because I absolutely hate the stuff and consider it to be a menace to society.

And here’s Earl picking out the peanut butter for me. He hates the stuff but tolerates it’s presence in the house because he knows how much I love it. Now that’s love.

It’s snowing like crazy outside. Earl has gone to the local casino to play in a poker tournament. He just called me to tell me he hit a straight flush at three-card poker while waiting for the tournament to start.

I’m thinking I’m going to have to run the snowblower today. I was hoping to not have to do that again this winter. As usual, Mother Nature wins.

I was doing some random search on Google for something in Syracuse when I stumbled across a website dedicated to the children’s show I watched as a young lad. Now off the air,The Magic Toy Shop holds the record for the longest running locally produced children’s television program.

It’s a shame that wholesome kids shows like this have sort of fallen out of favor with families. 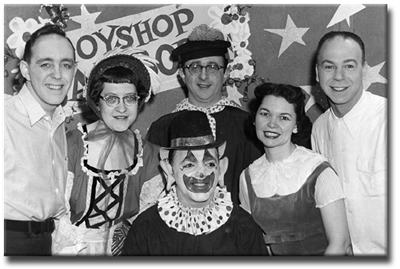