Two lovely women stand in the center of the stage. On them, lights from every direction and millions of eyes from all over America. Moments before, a third had been asked to leave as she received the lowest votes. In typical fashion, she was told “you had the lowest votes, America has voted and you’re going home. Now sing one more time for us!”. So the audience sits one more time through an excruciating performance of “Last Dance” by Donna Summer and then we’re brought to these two girls.

The wring their hands in anticipation. One of them is going home, right now. Which will it be? The host asks the middle judge on the panel, “Paula, why do you think these two ladies are here right now?” Her professional, well slurred and thought out answer? “Simon said because ate pizza and one ate salad.” She then breaks into laughter and the host looks in horror as he realizes she’s making a joke at one of the most dramatic moments of the evening.

A similar scene is painted again, this time with two male contestants. One of them is going home. The hosts, a little more sheepishly this time, asks the middle panelist a question. “What would you recommend for one of these men going home?” Her reply? “Simon hands out fortune cookies on X factor and the melon eats the corn flake.”

Several weeks ago I wrote that Miss Paula Abdul had gotten her act together and seemed to be handling this year’s American Idol with her trademark poise, confidence and maternal instincts.

Nah. She’s still a lush. Or stoned. Or both. 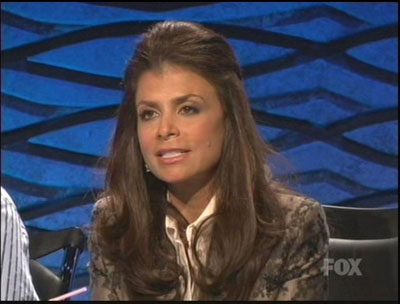 Thanks to Rotten Ryan for the Paula cap. I totally stole it from his site.