Today while Earl and I were driving to his home turf outside of Philadelphia, I let him do the driving so I could play around with the GPS program on my PowerBook. I haven’t played around with this as much as I’d like to, but inspired by yesterday’s speed boost of my computer, I thought I’d give it another whirl and see what I could find out about our surroundings. 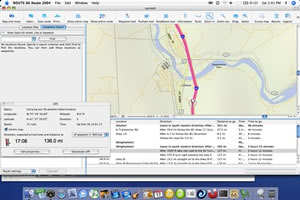 For example, just south of Binghamton, N.Y., the New York-Pennsylvania state line is very, very close to the 42nd parallel. It’s literally inches from it. I’m wondering if the signs are actually off a little bit and when the state borders were negotiated if it really does follow the 42nd parallel.

I also found out that the “mountainous” area in New York’s Southern Tier isn’t really that mountainous at all but rather just a bunch of precocious hills, with the highest point on I-81 between Syracuse and Binghamton clocking in at around 1300 feet.

I’m looking forward to doing more of this investigative work as we get into traveling season this spring. I’m also going to have to look into this activity called geocaching. It sounds quite interesting.