She is a beautiful woman. She’s lost her mind, actually it’s been washed away, but her beauty is still intact. That’s pretty much undeniable. Why then, does she look like she’s about to swallow a whole rat (like Diana did in “V” back in the early 80s) whenever the paparazzi grab a shot of Katie Holmes? 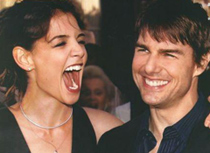 Rotten Ryan mentioned this way back in October, but now that the internet is being peppered with another whacko performance* by the increasingly startling Tom Cruise and rumors of a TomKat breakup, pictures such as this are starting to appear again.

I find it all quite unnerving.

*From what I’ve been able to gather, Tom Cruise went to the Kanye West Grammy party where he didn’t like the crowd around him, so he climbed up some ropes or cables as if he were still filming for Mission Impossible. This, of course, was apparently the proper way to get to the VIP section. Once he settled in he did some crazy dance while singing along to the lyrics “we want prenup” and then asked everyone around him their religion and told them that Scientology has improved fianceÃ©’s and his lives. I think someone forgot their Flintstone chewable that morning.