I’ve been asked by a couple of people as to why I keep an on-line journal. To tell you the truth, I really don’t know. It could be because there’s a certain “wickedness” to it, you never know who’s reading what you’re saying, unless of course I get an e-mail like “You’re a moron!”, of which I just hit delete.

It could be because I have so many thoughts racing around my mind all the time that I just say the hell with it and write some of it down. I must admit, that I am shocked at how bad my grammar and spelling has become as I have gotten lazy over the years.

Then I think of it as a time capsule sometimes, and someday I’ll look back on all the stuff I wrote and get a good chuckle. I hope I’ll be laughing over piles of money, because I’m not spending it recklessly anymore! 🙂 By the way, I still have the beard, so that means I’ve been good with money.

We’re now 16 days into grizzly mode, and it’s looking like this: 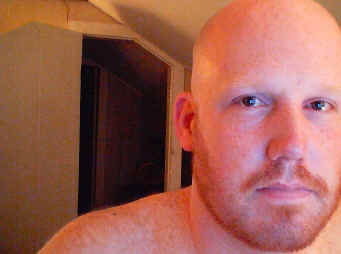 I must say that it’s coming along nicely. I used my Kodak webcam for that one, because the IBM cam is putting pictures on the site, and it can’t do two things at once. If you haven’t seen the webcam page with shots from me at work and at home, take a peek here. I really like that picture of me, I’m using it on my Yahoo! profile.

On the geek front, I’ve been very successfully selling items on ebay this week. It’s rather satisfying selling items on ebay rather than buying them. I’ll have to go around the house and see what else we need to get rid of. 🙂 I also received a bunch of information on that cash register system I was trying to get working. Unfortunately, I still can’t get it working so it’s going into storage until I can find more stuff for it, probably in a junk pile somewhere. Earl and I are still on a “cleaning the house” kick, with most of the stuff from the City Pound being tossed out, along with a bunch of other junk.

It turns out, by the way, that the cat indeed wrestle with a skunk the other night. If you read below, you’ll see that I mention that a skunk’s “perfume” was stinkin’ up the house as I was typing in my journal. Well, it was because the skunk sprayed Tom. Lovely. So I threw on a pair of shorts and drove to Hannaford’s to pick up a bunch of Tomato Juice and such, all at midnight, and then gave Tom a wonderful fur flyin’, claw scratchin’, screamin’ bath in it. He still stinks today, and it’s been five days. Not as bad though. He threw such a fit getting a bath that I couldn’t get him rinsed, and now he’s got tomato juice on his back that’s all dried up. It’s almost gone though.

Earl is just having a ball on his computer as we type. I think he’s just surfing the internet. He says hello.