I was surfing around aimlessly on the internet and came across an old crush from my childhood days. Always a huge superhero fan, I had a crush on John Davey as Captain Marvel, from the live action Shazam! Saturday morning show from the mid 1970s. 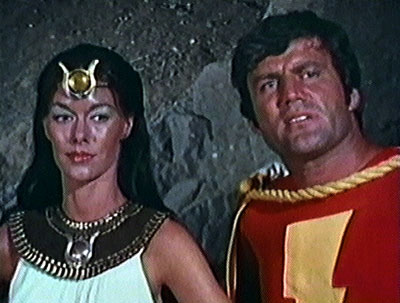 Here he is pictured with another favorite superhero, Isis.

There were two different Captain Marvels in the three season live action series. Captain Marvel was first played by Jackson Bostwick, who left halfway through the second season and was replaced by John Davey. I never really had a thing for Mr. Bostwick as a kid but I always found Mr. Davey quite “dreamy”. I always admired his firm jaw and hint of 5 o’clock shadow. He was built like a normal guy, not a body builder. When he handed out his pearls of wisdom he seemed comforting.

A little Googling turned up little on what John Davey is up to these days, whereas Jackson Bostwick has his own website. Maybe I need to switch search engines.