Earl and I decided to frequent the local casino for supper tonight. I guess we were in the mood for a little people watching and whole lot of food from the buffet. I could spend hours, maybe even days, watching people as I just find the whole world so amusing. So interesting. Even the most mundane person has something to contribute this world, even if it’s just a heap of boredom.

But I have to ask, who’s idea was it to bring back the mullet? For the hair history challenged, let me briefly explain what a mullet it is. You take a perfectly good head of hair, a little on the longish side, and head down to the mall. At the mall, you seek out one of those futuristic hair emporiums, usually named something like “Fashion 2005” or “Big Fashion, Little Cents” in big Atari type lettering. You are then consulted by the hair washer girl (who has failed beauty school a handful of times), the hair drying boy and then Gregor, the big sissy with parachute pants and snappy gum. He takes your perfectly good head of hair and sort of shag/Farrah’s it in the front but shorter. Think “feathered” with not a lot of “wing” but extra poof. Then he waves the scissors over the back and doesn’t take one millimeter off the length. Voila! A mullet.

It’s all business in the front but turn around! It’s all party in the back. Bring on the Milwaukee’s Best baby.

The extra adventurous pay extra to get that party in the back permed.

Back to the casino.

Whilst people watching, I noticed quite a few people (mostly men and a couple of mean looking dikes) wearing mullets! Holy ’87 Camaro! What to do? At first I suspected that it’s because the casino is only five miles from a dirt race track (hot action every Sunday night), but that would be stereotyping. No, no, no.

It’s just that bad fashion sense is prevalent in these parts. 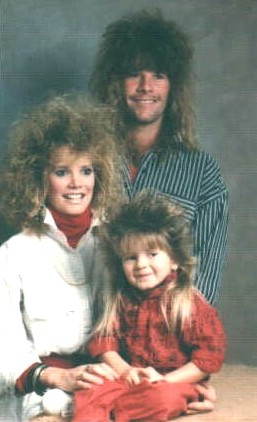