My grandfather passed away today. He has been bed ridden for the last month or two with various types and flavors of cancer. Having accepted his fate, his last couple of meals a week or so ago consisted of beer and popcorn, of his choosing. The doctors gave him two weeks to live. He showed them, he lived two weeks and a day since their proclamation. He would have turned 90 at the end of August.

My grandfather was an interesting man. As I told my co-workers today, he knew what he wanted and nothing was going to stop him once he set his mind to something. He lived his life balls to the wall and wasn’t afraid to try anything. He rode his motorcycles through last year. He drove home from Florida this past spring in his ’85 Mercedes. He’d probably still have flown his homebuilt airplanes if my father hadn’t taken the engine off one and the wings off another after a few landing mishaps, one involving powerlines.

He grew flowers and a lavish garden, looked at the moon through a giant telescope, took up photography, traveled the country two months out of the year, enjoyed exotic breeds of dogs, built one of the largest egg farms in the county from the ground up, maintained a beef farm later on and built a successful contracting business, lumber yard and hardware store for quite a few decades.

Riding with my grandfather in a car was an interesting experience as he set his own speed limits and followed his own rules of the road. On his commute to the family store (mostly on rural country roads), he often hit three digits while driving.

He was brash and cantankerous. He was loud. He had his opinions and made them known. Ironically, his demeanor taught me not to be afraid of other people and not to be ashamed of my own opinions.

After my grandmother passed away in February ’96 (they were married for 58 years), he dated a couple of women before remarrying in July of that same year. I believe he may have proposed to each one of their first date, he found his second wife in Beulah. He didn’t want to be alone. He wanted to enjoy sex. I hope I inherited his stamina.

I’m going to miss him. Rest in peace, Gramps. Please send my love to Grandma. My love to you both. 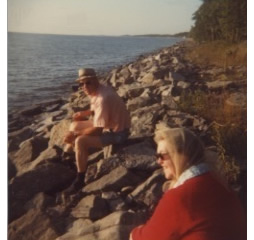