When I wrote yesterday’s blog entry, I mentioned that I was feeling a bit cranky. After getting on the plane yesterday, it all melted away. The crankiness, the negativity I had been feeling the past couple of days.

Usually I don’t relish the idea of flying. It’s not that I’m afraid of flying, because I’m not. It’s just such a hassle. But while we were flying over the Hudson River yesterday, I decided that it’s such a waste of energy to buck against flying. So I stopped. Simple as that. I wish I could lose my gut in the same fashion.

Earl and I arrived at Walt Disney World yesterday afternoon at 3:00 p.m. and just relaxed about Wilderness Lodge – enjoying the weather and the sights and the beautiful surroundings.

Last night we ate at Whispering Canyon CafÃ©, where its loud and rowdy and crazy. We had a sassy waitress named Half Pint. When we asked for iced tea refills, she brought us liter carafes with a straw. 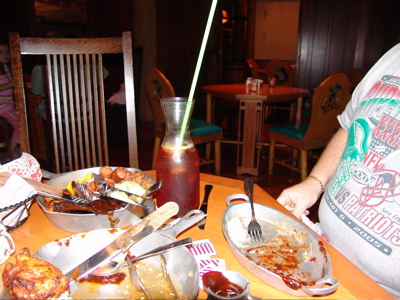 Afterwards, we watched the parade on the lake and then called it a night. A wonderful way to start our vacation.

This morning we walked on the beach and did some yoga type stretching, took a quick shower now we’re on our way to a light breakfast and then off to the Magic Kingdom.