So it’s back to work after the magic of Disney. Work is going well today, with a surprisingly minimal amount of catch-up to do. Either I’m not that important or frightfully efficient. Maybe it’s a delightful combination of both. Either way, work is going very well and its good to be free of complaints.

Earl is on his way to Cleveland tonight, then on to Baltimore. I think he’s going to have an interesting trip with this snowstorm coming up the coast. As I type this entry, I just noticed that he didn’t take his iBook with him, so we won’t be able to ‘cam like I enjoy doing. Oh well, I guess we’ll just have to deal.

Now everyone is getting settled in for what is hopefully that last major snowstorm of the season. Wouldn’t that be nice. I’ve said it before, and I’ll say it again.

I am so ready for spring.

Here’s a picture of the happy travelers. This was taken at the Animal Kingdom at Walt Disney World, as evidenced by the Tree of Life in the background. 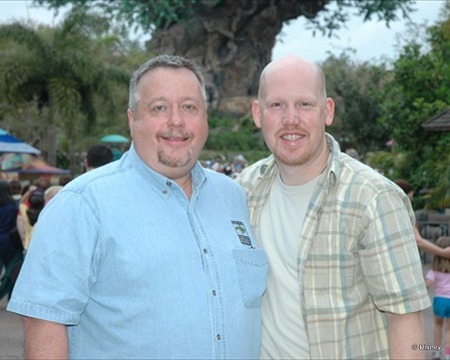 Earl and I are back home, our vacation rapidly becoming a fond memory. The smells of Florida air are long gone, replaced by the chill of late February in Upstate New York. The National Weather Service has issued a winter storm warning for the area, with up to eight inches of snow predicted by this time tomorrow night.

Why do we live here again?

Tom is back home after a week with Gram, who took great delight in doting over her grandcat. I think he’s looking forward to visiting again, but not too soon as he doesn’t enjoy the ride.

As of last night, I gained just shy of 10 pounds on vacation. I would’ve thrown out a view expletives here, but in trying to stay Disneylike, I’ll just say “Golly gee, I have some work to do in the exercise department!”.

After discussion on the plane yesterday, Earl and I jumped onto a technology bandwagon today and are in the process of switching our phone service to Vonage. Let’s see, nearly $60.00 a month through Verizon or Sprint or $16.00 a month through Vonage. A no-brainer. Plus, it’s embracing the latest rage in telecommunications, VoIP. Mark my words, in ten years, everyone will either be on wireless or VoIP, and the nightmare of the Bell companies will be long gone.

I also picked up a MIDI keyboard for my PowerBook so I can go crazy on Garage Band 2.

I’m leaping into work with both feet tomorrow. It’s an on-call week. Plus, the tests for my surgery are on Thursday, with the surgery on the following Friday.

March is going to be an interesting month. But by this time next month, I’ll be good as new and feeling golden. So I guess it’s worth it. But I wish I could be honest when saying “I’m glad to be home”, but I’m really not. Earl is off on business again tomorrow. After being together 24/7 for the past nine days, that sort of sucks. But I guess it’s something we have to live with. I’ve been saying for the past month and a half that I wasn’t really feeling the winter/cabin fever blahs.

I think I lied.