It’s our first big snow storm of the winter here in Chicago. I walked the neighborhood this afternoon. There’s around eight inches of snow on the ground in our area. It doesn’t really slow things down in our fine city.

I am happy I don’t have to shovel it. 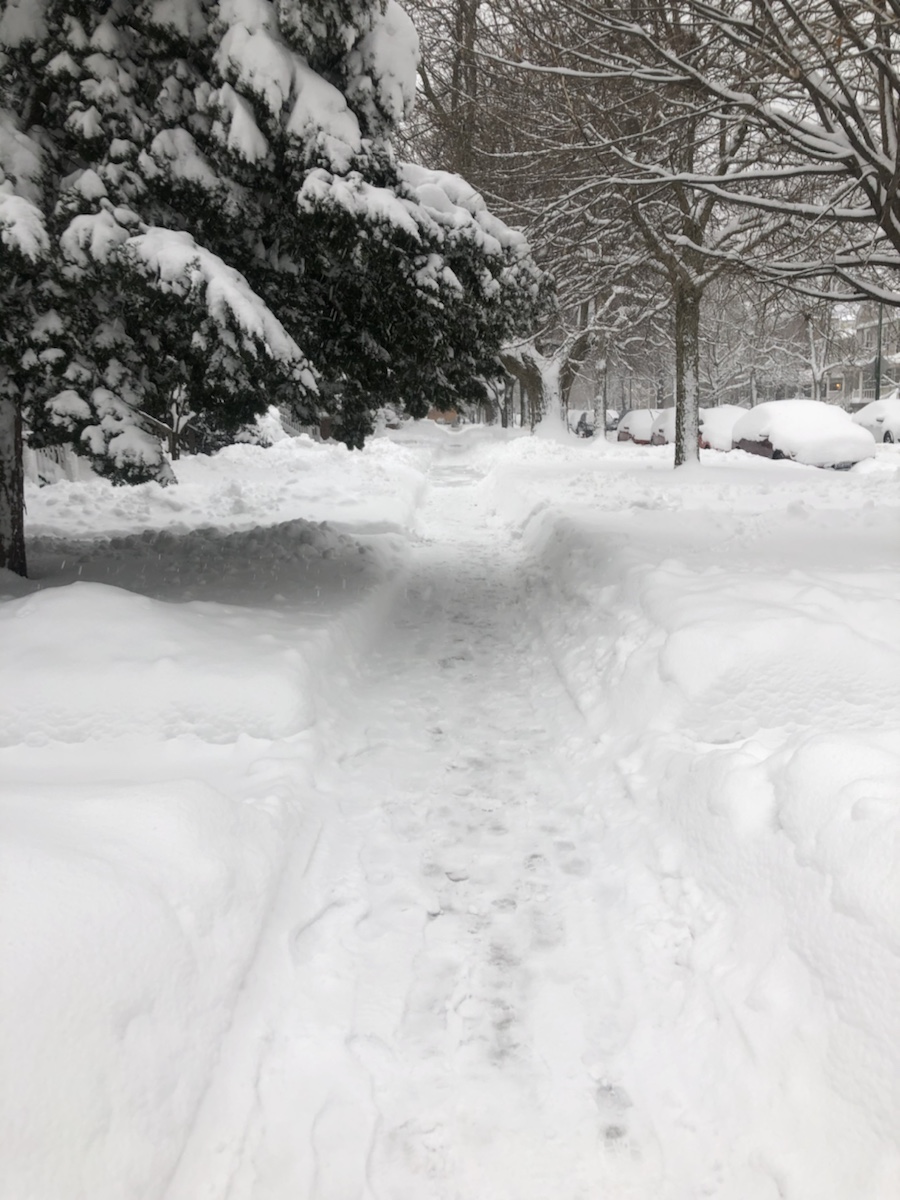 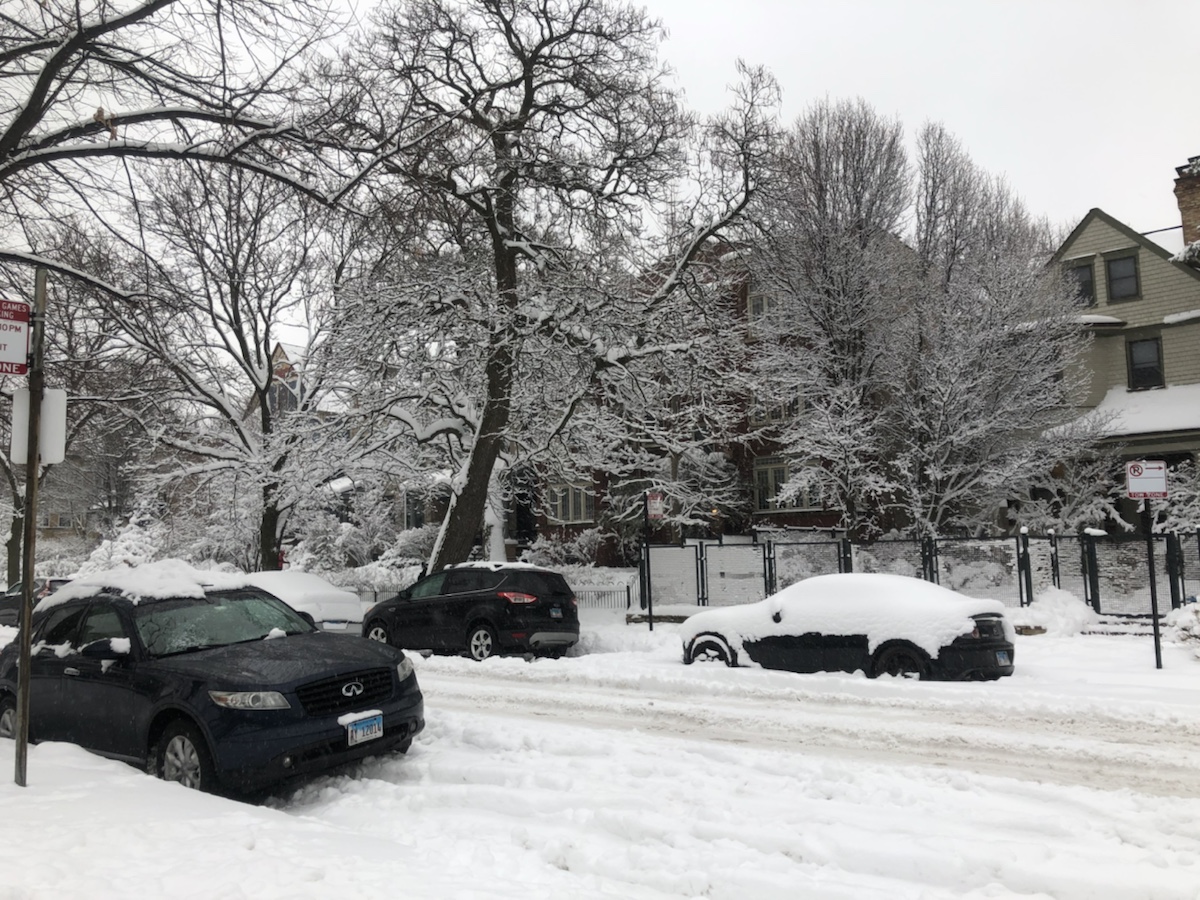 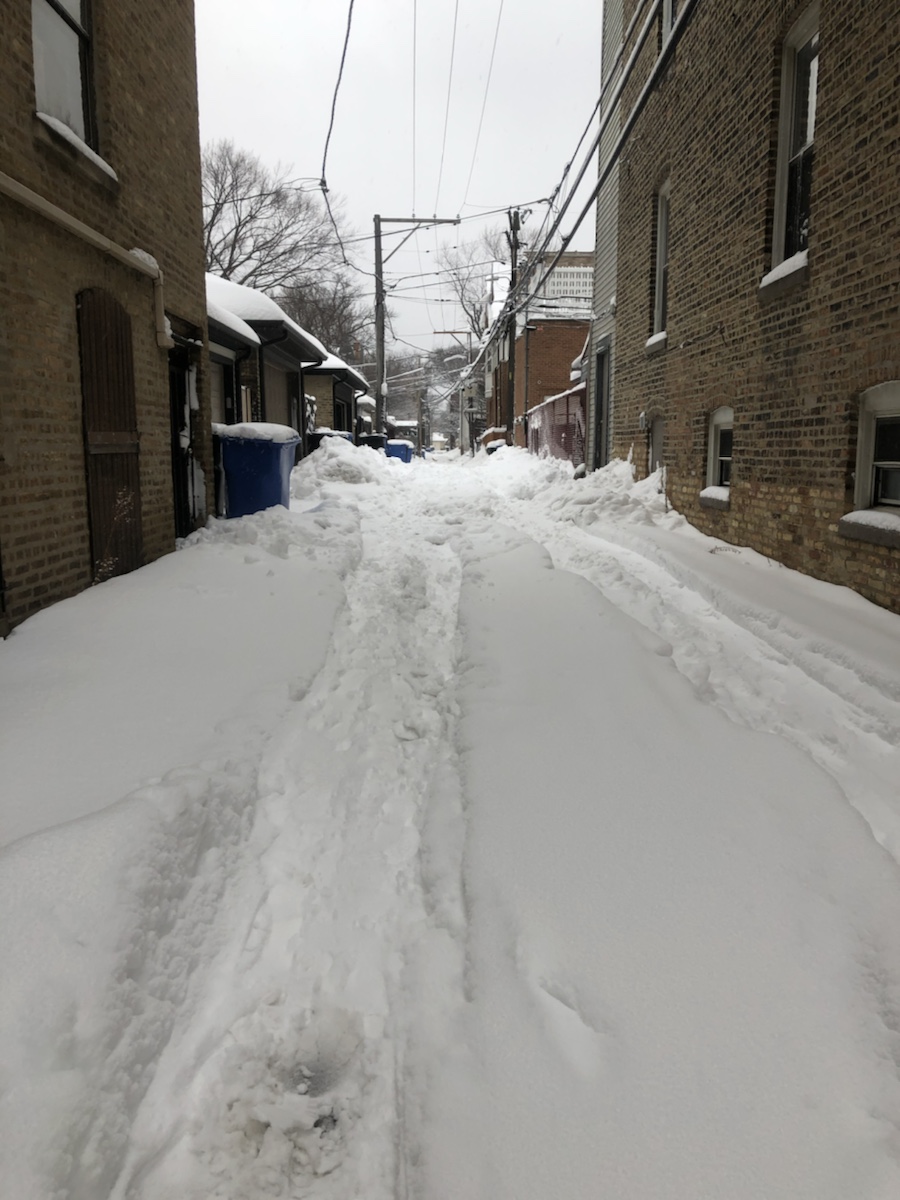 So either the movie production company left the Christmas decorations up or the folks on the street that was used for the movie set wanted to make a splash of their own. Either way, the decorations are still up and they’re quite lovely.

Lincoln Square here in Chicago always does it up nice for the holidays. Even if the streets aren’t as bustling as usual for the holiday season, it’s still quite pretty to look at. 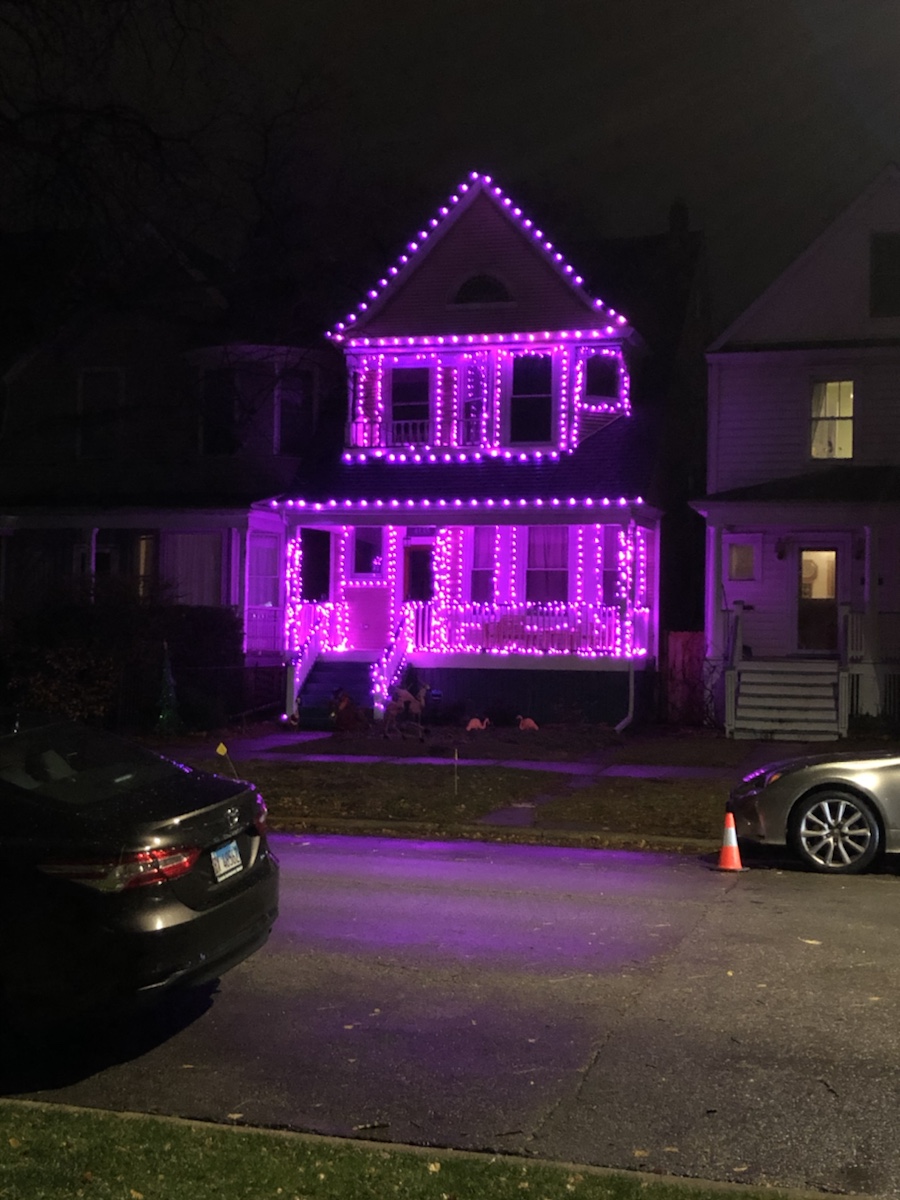 The neighbors down the street have opted to go with a pink motif for their holiday decorating. There’s a part of me that’s wondering if this associated with the Christmas movie being filmed in the neighborhood, as this house is just a couple of houses down from the house their using as a film set. (Hence the cone on the street).

This was taken at 5:00 PM in the afternoon and it is quite striking. I don’t really think of this color as being all that Christmas-y, but it is certainly festive.

This is a capture of sunset from our balcony. I feel like my iPhone X didn’t quite capture the spectacular beauty of Mother Nature’s efforts, but the colors are still enjoyable, nonetheless.

I’m ready for the country to settle down a bit. Things have been too hectic for too long. It’s wonderful that our planet can keep showing us its natural beauty.

I occasionally need the reminder.

Last week our condo building had some hot water issues. There are several hot water tanks on the top floor of the building and they feed water to the condo units via recirculating pumps. One of the pumps failed and therefore we had lowered water pressure. It would take nearly five minutes for hot water to get to our shower. I had to plan ahead in the morning. I don’t even speak English that well in the morning.

At the same time, the cold water main into our unit sprung a very small leak and decided to start dripping in the ceiling, resulting in water spots and the like above the washing machine in the utility room. We had a maintenance team over and they cut a hole in the ceiling sheetrock. The source of the leak was identified; a copper joint was the culprit. It is located less than two inches away from our gas main.

So, the Condo Association and Management Company hired a plumber to take care of a few jobs at once. A very eccentric man, he quickly fixed the leak in our laundry room with some sort of new compression fittings for copper piping that didn’t require soldering or any other sort of flame. Now, we just have to get our ceiling repaired.

Afterwards he went on to fix the few other plumbing issues throughout the building, including the hot water issue on the top floor. Apparently the pumps are not the type to be easily obtained, but within a few days, the management company sent out an all-points bulletin declaring our hot water issues were resolved. After a few days of low pressure showers, I was ready to get back to business with my morning routine.

I’m (not surprisingly) somewhat picky about my shower experience. I like a fairly high pressure shower. I want a shower that is going to pin me against the wall. I carefully picked out a specific shower head known for its aggressive tendencies and have been enjoying the results of my research. I like a shower that requires a seat belt.

The thing is, after the declaration of “all is well”, the water pressure was still low. It was better than it was but it was in no way where it was before the whole affair began. I didn’t need a seat belt. I needed a booster seat.

I made another call to the plumber.

Before charging us for another visit, he suggested we take off the shower head and make sure no sediment had come through the pipes during the recent discussion. So I followed his lead and took off the shower head. I shook it to make sure nothing was in there, it was clear. I looked up into the pipe coming out of the wall, all was clear. I decided to run water without the shower head just to see how good the pressure was. It was good, not great. All of a sudden, the pipes made a few seconds of a banging sound in the wall and something came flying out in the water stream.

It was an aerator for a faucet.

Now, it wasn’t in the pipe when I looked inside. It wasn’t in the shower head. It apparently had been floating around in the pipes for who knows how long and had apparently made its way to our unit to impede my shower experience. Once it exited the pipe, the water pressure shot up well above anything we had experienced before. I turned off the water, put the shower head back in place, and decided to give it a whirl.

I’m now going to need a five point seat belt for my shower experience. I couldn’t be more delighted.

I like it when we have the train car to ourselves.

I will never understand that American motorist aversion to Roundabouts. For those unfamiliar with the concept, a Roundabout is an interchange with a circular median. Traffic entering the roundabout yields to the traffic already in the roundabout. Entry points into the roundabout are “channelized” to reduce the risk of someone turning the wrong way into the roundabout. The channelization also provides a safe location for pedestrians and cyclists to move through the intersection. There are no traffic lights.

Community knee-jerk reactions to an accident at a busy intersection is either on or a combination of two things: put up a traffic signal and/or lower the speed limit.

For the most part, motorists will naturally drive at the speed that “feels” appropriate for a roadway. When you design a highway for a 55 MPH design speed and then lower the speed limit to 30 MPH, motorists will still tend to drive 55 MPH. They will then slam on the brakes whenever they see something that resembles an officer of the law, which lends to erratic driving and creates the potential for an accident.

Anytime you stop traffic you are creating the potential for an accident. Traffic signals, especially ones located in relatively rural or semi-suburban areas, catch motorists off guard. And in today’s hurry, hurry, hurry environment, where everything and anything is expected now, drivers are running traffic lights more than ever. They see the light turn yellow and they gun it, trying to beat the light.

A roundabout is a traffic calming measure. Traffic keeps moving, but the design of the intersection moves that traffic at naturally slower, measured pace.

I suspect many American drivers are against the installation of roundabouts for two reasons: 1. they’re different and 2. they’re perceived as “un-American”. Roundabouts are much more prevalent in Europe and other parts of the world. State Departments of Transportation have only been building roundabouts for the past dozen or so years here in the United States. Well, since the beginning of the 21st century.

Some folks mix up Roundabouts with the higher speed Rotaries and Traffic Circle designs from the middle of the 20th century. These older designs are often larger than their modern replacement, have erratic practices for entry and exit, and manage traffic at a higher speed.

An added bonus of roundabouts is they’re more ecologically friendly. Traffic isn’t stopping and starting as much as at signalized intersections and no electricity is required to power the traffic signals. And on a side note, why haven’t we started converting our traffic signals to solar power?

The intersection in question is located in the northwestern corner of Indiana, not too far from the Illinois state line. A traffic light managed traffic at an intersection in the middle of corn fields, but there were several growing housing developments in the neighborhood. As a guy that went to school for Civil Engineering, I can tell you this particular location would probably be perfect for a roundabout.

State and other DOTs need to concentrate on education and other forms of public outreach. There is a decent chance that we could reduce accidents at intersections a bit if we continued to convert our intersections to this modern design.

Tanya Tucker and Helen Reddy both released the song “Delta Dawn” around the same time in my youth. My dad, born on a farm in the middle of cow country, listened to WHEN hit radio, which played the Helen Reddy version of the hit song.

My mom, who was born and raised in the center of Syracuse, New York, where they had folks of different skin colors at her school, preferred the Tanya Tucker version from the country radio station WSCP. I found this odd, because my mother had a bit of a feminist Helen Reddy “I Am Woman” vibe going on. My dad was born in the country but he liked city music and my mom was born in the city and she liked country music. She had a Marlo Thomas hairdo. She watched Donahue and everything.