Iâ€™ve mentioned this before, my interest in technology all started with electronic cash registers. As part of my deep fascination with â€œall things connectedâ€, when our local retail outlets began converting from the electromechanical cash registers to their electronic equivalents in the mid to late 1970s, I was quite intrigued. These electronic wonders, which contained a tiny fraction of the computing power we have at our fingertips or on our wrists today, were amazing to me with their segmented LED displays, crisp, clanking printers, and quick computations of tax and change.

I recently obtained a few bits of memorabilia from the long gone Data Terminal Systems company of Maynard, Mass. I now have a brass keychain, a silicon chip commemorating the 75,000th electronic cash register produced by the company, and the display panel of one of their cash registers. The guidance display is for the French version, so it has markings like FERME and SOUS TOTAL instead of LOCKED and SUB TOTAL.

Seeing the display immediately reminded me of something I noticed back in the very early 1980s. On the display strip above, youâ€™ll see the â€œData Terminal Systems Series 300â€ is left justified to the piece of plastic. On the cash registers we had at the local grocery store, the display was identical to this (albeit in English) except it said â€œData Terminal Systems Series 400â€ and itâ€™s centered on the plastic. The cabinet is the same, the keyboard is the same, the cash drawer is the same, but the difference in model changed the position of the name badge. I instantly recalled noticing this back in 1981 or 1982. 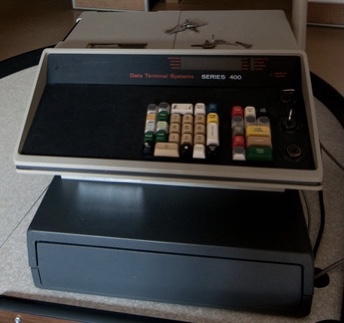 Recalling this buried memory so vividly unlocked a bunch of memories and observations I had about these cash registers.

Having a memory like this is a wonderful thing. I can recall many things that make me smile. I remember wonderful things that have happened decades ago. I have no idea what I ate for lunch yesterday but I can tell you that on Fridays in elementary school we had â€œFishburgersâ€ with a side of green beans, peanuts, and a dish of apple crisp in March 1978.

Unfortunately my memory also retains the bad stuff. I recall every time I was hollered at by a teacher or authority figure. I remember taunts and teases and the like for being who I am. I recall punching my sister in the leg when I was getting too many â€œinputsâ€ at once and subsequently overwhelmed by the radio, the traffic, and her yelling while driving through the small city of Watertown on the way to our semi-weekly dentist appointments. (Sorry for punching you, sis, I still feel bad about it to this day).

The key to a successful life is remembering and building upon on the good things and simply learning from the bad things and moving on. Letting go is not easy for me. Memories simply donâ€™t fade. They may skew slightly and I imagine some day Iâ€™ll run out of storage space, but I wouldnâ€™t trade my ability to remember things for anything, despite my tendency to dwell on the bad things from time to time.

Iâ€™m solidly in the latter half of my life and if I were to have one resolution for 2021, it would be to not sweat the small stuff and to learn from the challenges and move on. Just because weâ€™re on the downhill slope doesnâ€™t mean we canâ€™t keep building and growing.

To grow with positivity is to be alive. Iâ€™ll have to remember that.