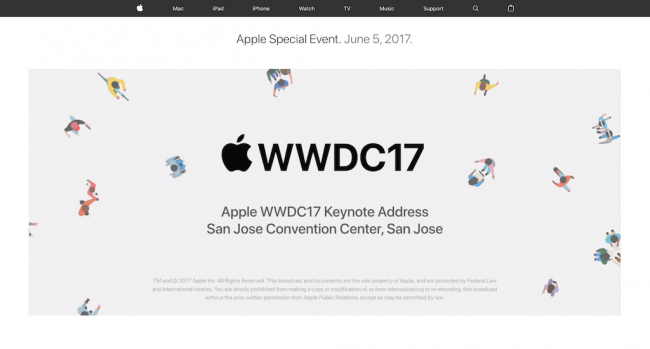 I keep saying that someday I’m going to attend WWDC, or the Apple Worldwide Developers Conference. This is a yearly event where developers for Apple’s various platforms get together and Apple shares with the developers as to why Apple has the greatest platform in the world to develop for. They have workshops, product announcements, platform upgrade announcements and sneak peeks and basically a great opportunity for software developers from all over the world to get together and geek out on Apple products together.

Yesterday Apple kicked off WWDC 2017 with their annual Special Event, in which they took the opportunity to announce a few new products and their planned upgrades to their operating systems (macOS for the Macintosh, iOS for iPhone and iPad, etc.)

As much as I wretch about Apple and their Quality Control practices of late, after exploring other options that are out there I’m still fully committed to the Apple line of products for a myriad of reasons. When compared to other platforms, I find that Apple’s approach to computing works best for my needs. The fit and finish of their devices meet my expectations (long gone are my days of using cheap, plastic technology that breaks down in less than a year). And, probably most importantly, Apple is not funded by ad revenue that is gleaned from my data. In the wide scope of things I don’t really care if Search Company X cares if brush my teeth with Colgate or Crest but I absolutely, positively despise advertising, especially ads embedded in software I’m trying to use. Forget about web pages that have dancing ads or autoplaying videos about Athlete’s Foot or whatever. I am always willing to pay that little bit extra to keep the ads out of my computing experience.

Apple’s experience is the best way to accomplish that task.

I totally get that there is a wide array of folks out there that absolutely despise Apple and everything that they stand for. I’ve heard everything from “they force you to upgrade every year” (they don’t, in fact, Apple’s MacBook Pro line usually lasts longer than anything belched out by one of the PC Notebook companies), “I shouldn’t have to pay for a grounded spaceship in the middle of Northern California” (honestly, I hope the new Apple Campus becomes a beacon of how environmentally friendly a company, and any person, should be these days) and “Pffff, who cares, Android has been doing that forever” (which I think is wonderful. I’ve used Android before, it feels like a second rate, kitchen-sink operating system to me that could fall apart at any given moment, but if it works for you, use it. I’m not going to evangelize why you shouldn’t use Android, that’s your business).

The Special Event yesterday has a bunch of announcements that pretty much followed the script predicted by the rumors that have been floating about. iPhone and iPads will get iOS 11. Macs will get macOS High Sierra, which sounds like it’s going to follow the same precedent that Mac OS X Leopard followed years ago when they added refinements and tweaks to Leopard to give us Snow Leopard. Getting totally geeky, macOS will get a new filesystem that will immensely speed up file operations on the hard drive and as a person that copies a lot of video that’s a very cool thing. Apple also announced the new HomePod (not completely a fan of the name) which brings Siri to the smart speaker paradigm currently led by Amazon with the Echo and Google with Google Home. It’s pricey but apparently it has amazing sound. Siri is built in. Everyone tells me how awful Siri is and that it’s worthless but I use Siri all the time, especially to control our Philips Hue lights when Amazon Echo’s Alexa responds with “I can’t find the device you’re looking for” after every other request. Siri always knows how to turn off the lights on dining room hutch. Alexa can turn them on but forgets how to turn them off.

The two standout features that really grabbed my attention had to do with mobile and are both in iOS 11. The first one is safety oriented and is called “Do Not Disturb While Driving” mode. Basically, iOS 11 now has the ability to detect while you’re driving and will put your phone in a Do Not Disturb mode, replying automatically to messages on your behalf indicating what you’re doing. The screen will remain dark and when you get to your destination everything will unlock and you can catch up on your activity then. You can build a VIP list that allows select users to reply to the alert with “Urgent” and it will force your iPhone to display the message.

I think this is exactly what they driving American public needs in a smartphone right now and I am eager to use it.

The second update to iOS 11 that really got my attention was the vast improvements to using iOS on the iPad. Apple made great strides in making the iPad Pro more of a content generation device and less of a content consumption device. The addition of Drag and Drop to the interface, along with a more familiar Mac-like dock along the bottom is a welcomed enhancement. I have always wanted to use my iPad Pro as my primary computing device, especially when traveling, but I’ve always felt boxed in by the experience. While not perfect, iOS 11 takes a hearty step forward in making this possible, at least within my realm, and I’m eager to try it out.

The hardware upgrades announced were a welcomed addition to the event, and one that should calm folks screaming about Apple being behind the curve on processing power in their MacBook Pro line, at bat for a bit. One of the hardware announcements, the new iMac Pro coming in December, really grabbed my eye. This is an iMac designed to be a powerhouse of a machine and to be used in professional environments (photo editing, graphic design, video creation, etc). It’s pricey but the specs are out of this world. And the best part it, while it is amazing, it’s NOT a replacement for the Mac Pro, which is going to be updated in 2018.

It also comes in Space Gray with all new Space Gray accessories. It looks bad ass. 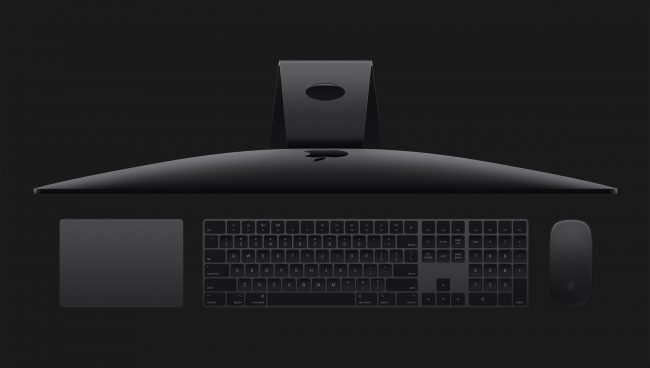 All in all, I’m a very happy and content Apple Geek. I purchased a couple of things yesterday (tell my husband to calm down as I didn’t spend a great deal of money at all) and I’m looking forward to watching some of the workshops at WWDC 2017 online in my spare time this week.