So this morning I headed to the airport for the weekly class, which I call our “safety briefing”. Once a week, every Saturday morning, the members of our local flying club get together for coffee and donuts and an hour long presentation on various ways to better ourselves as pilots. The vibe is wonderful and similar to the events I remember from growing up around airplanes and flying clubs when I was a kid.

Right before the end of class, my (former) instructor told me that the student scheduled to fly right after the briefing had canceled and he told me I could take the airplane out earlier if I wanted to, since no one would be using the airplane. I had originally scheduled the airplane from 2:30 to 4:30 pm for Earl and me to enjoy a flight this afternoon.

After chatting with a few other pilots, we all decided that it would be fun to take three airplanes to a field about 50 miles away for lunch. We decided to go to Fulton County Airport (NY0) near the city of Johnstown. The airport in question is about three miles from where I work. I had never flown into the airport but I had been by the field many times.

I called Earl and asked if he wanted to fly with me per this new plan. It took some convincing; he was still in sweats and hadn’t showered for the day. I told him none of this mattered, because we would get to fly! He finally caved to my hints and met me at the airport 20 minutes later, just as I was finishing up the pre-flight of the club Cherokee 140. 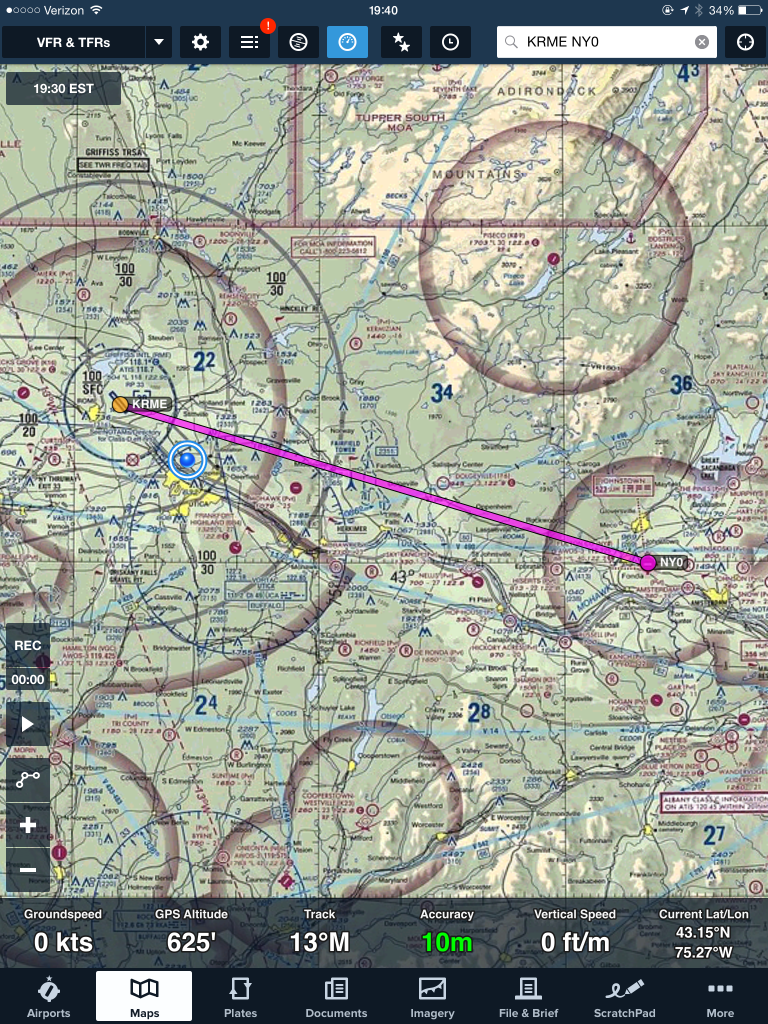 Since this was a spontaneous flight of sorts, I didn’t get the chance to do hours of preparation like I had during my training. I knew where I was going and I knew that I was fully capable of the flight, but it was a weird yet exciting feeling to be doing this. We needed to fuel up the airplane; the others left ahead of us by about 15 minutes. Fueled up and ready to go, Earl and I made the flight. It was a little hazy and I was a little nervous about all these new elements that I hadn’t experienced before, but overall the flight to Fulton County was quite enjoyable. Earl asked me many more questions today. He’s really intrigued by this General Aviation thing and he seemed to be having a great time. Fulton County doesn’t have a control tower, it’s “pilot controlled” in that we watch for airplanes that might not have a radio and we announce our intentions all along the way to landing. I made my radio calls and before we knew it, I made an excellent landing on runway 28. Our fellow pilots were waiting for us and let us know that the restaurant was closed. Ack, no food after all. 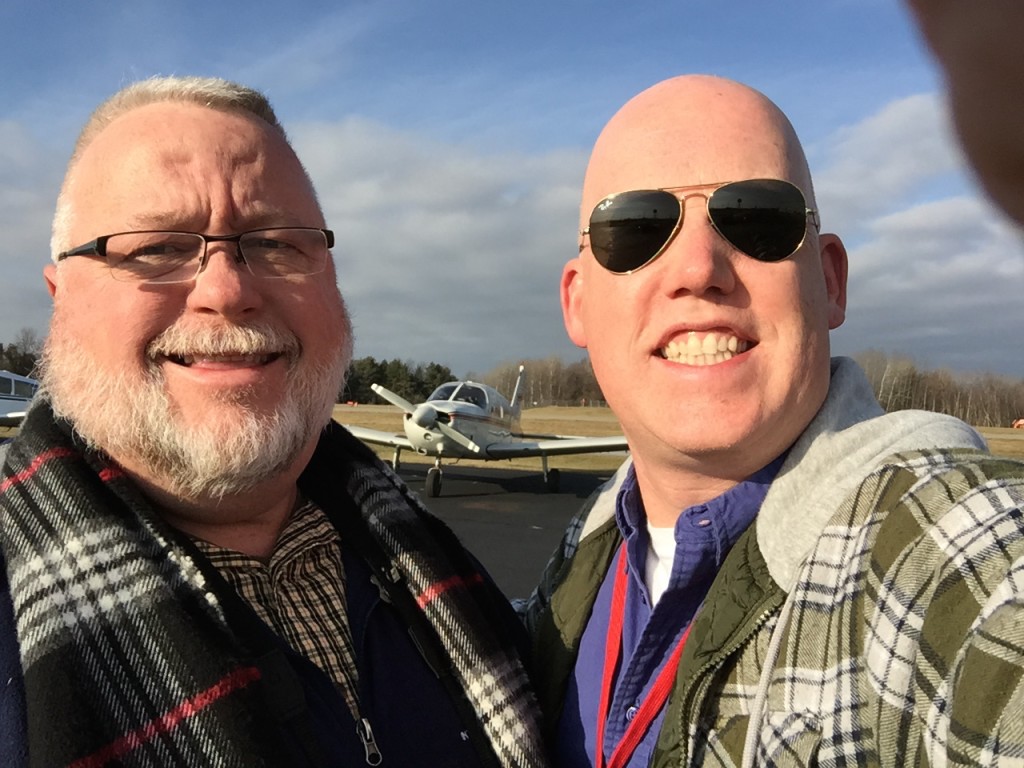 Earl and I took a selfie, something that we’ll probably do at many airports over the coming years. Earl then took a photo of the group of us. 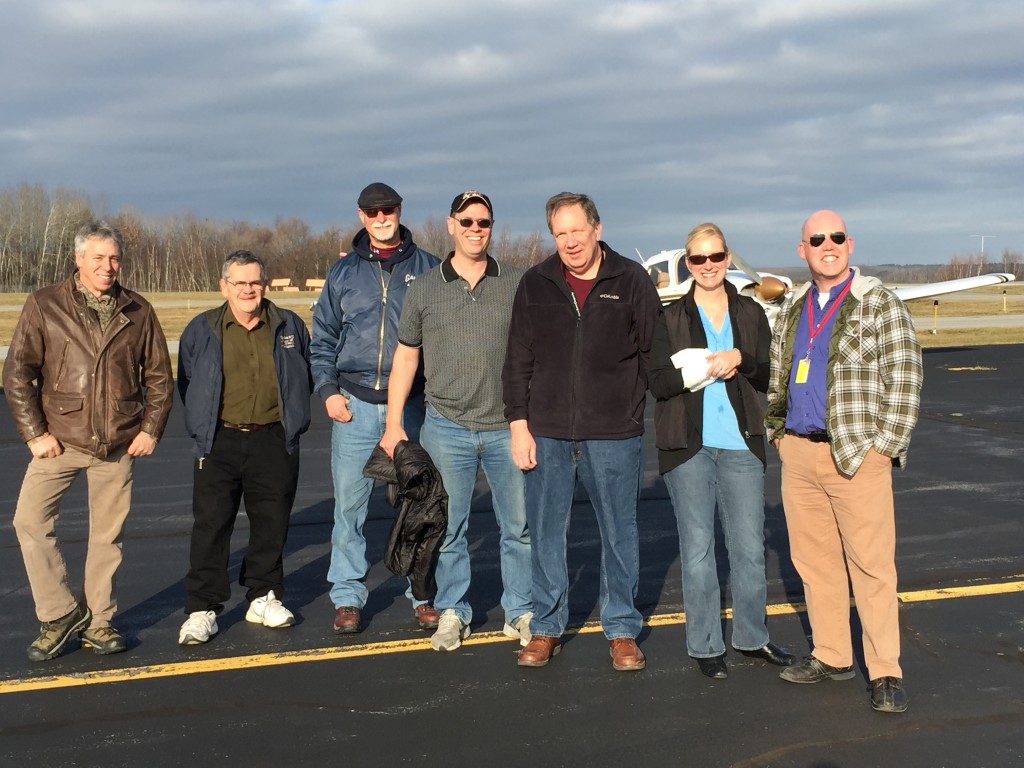 While we were there shooting the breeze, another pilot based at the airport went up and practiced some touch and goes and then various stunts. If you look closely, you can see his yellow airplane in the gorgeous sky. 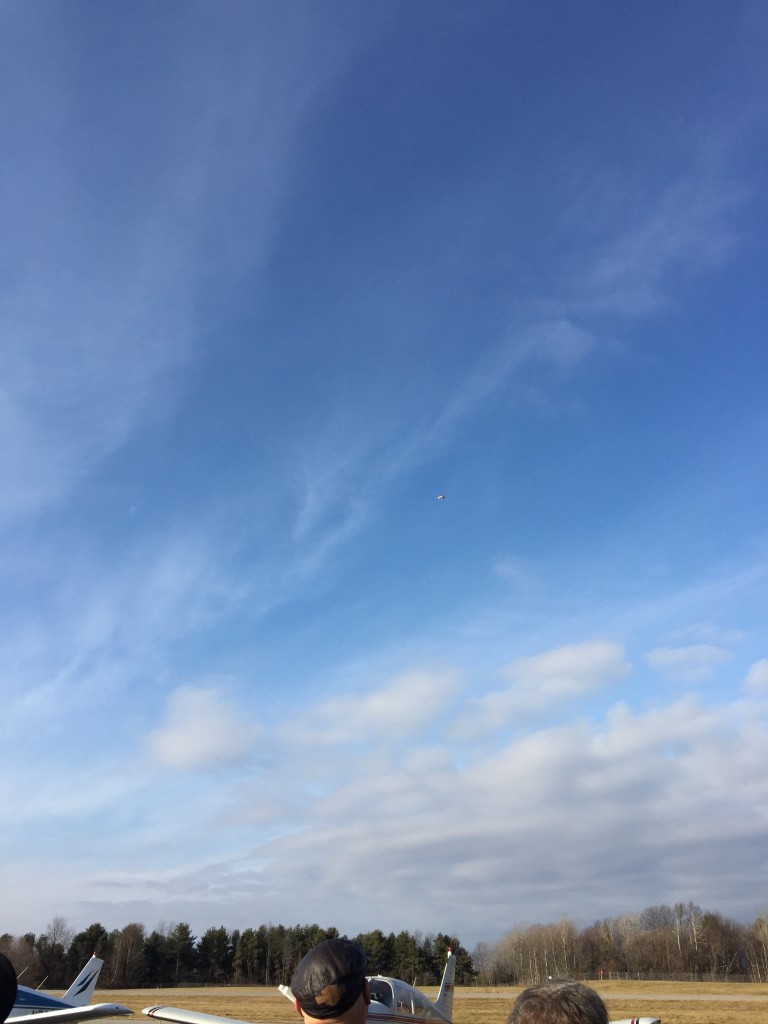 Afterwards, we all departed, one right after another and flew to our home airport. Earl and I were in the Cherokee 140 while the other two airplanes were Cherokee 180s, so they had a few more horses to play with, but we brought up the rear and was able to watch one of the other airplanes land just as we were arriving at the airport. Another excellent landing and it was time to put the airplane away.

Days like today are the reason I became a Private Pilot. The adventures have just begun.