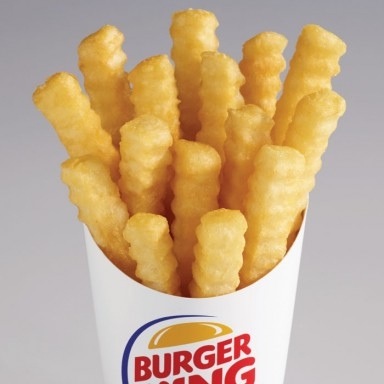 Last night I was watching the evening news when Brian Williams announced a “major fast-food industry break through, after the break.” I was intrigued enough to sit through commercials and see what was involved with this major breakthrough.

Yesterday, Burger King restaurants across the United States began selling “Satisfries”. As a new addition to their menu, Satisfries are touted as a healthier alternative to the traditional french fries that remain on Burger King’s menu.

Burger King won’t divulge what changes they made to the recipe that makes these fries, but the did tell that they use the same potatoes, cut to the same size as the traditional offerings and that they use the same oil to fry the Satisfries. There’s something different about the batter, apparently they’ve shifted ratio of ingredients around a bit, and the result is the batter is thinner and it doesn’t hold as much oil.

While I am trying really hard to avoid fast food and, for that matter, fried food, I must admit that I am probably intrigued enough to give these Satisfries a try this weekend. At first I was going to avoid these things at all cost, as I was certain that there were secret ingredients like O-Lean (Olestra) involved and I certainly don’t want to relive the experimental no-fat Lays incident of 1995.

Burger King has been at this new recipe for a decade. I figure if I don’t feel satisfied with Satisfries, I can feed them to the seagulls that seem to be always hanging around at BK.