I thought it would be kind of weird to have a New Year’s Eve Countdown without Dick Clark and I was right to an extent; it was actually much weirder than I thought it could possibly be. I mean, who in their right mind thought that Fergie and Jenny McCarthy should be hosting a tribute to Dick Clark? Jenny McCarthy was her usual incoherent self so that wasn’t the weird part, the weird part was Fergie, who was apparently auditioning for a sex tape where she was captured by spaced out, apparently drugged crowd people that glued her right hand to her hip as she nearly serviced the microphone and made people uncomfortable with her pronunciation of the word “Dick”. 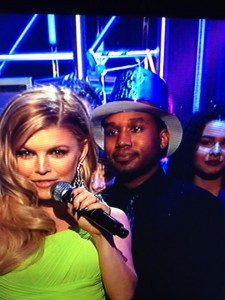 We couldn’t take Jenny and Fergie so we switched to Kathy Griffin and Anderson Cooper as soon as we could and we found them to be much more enjoyable. I’ve always found Anderson to be adorable (and I like his journalism ways) and Kathy can be fun in managed doses, so it was a good combination again this year. We watched the ball drop, there were kisses and hugs and text messages and then we called it a night.

Today has been a day of relaxation with bouts of productivity. I just hauled a bunch of stuff out to the curb for garbage pickup tomorrow. Cleaning clutter is always a good way to start a new year.