Rarely am I asked as to why I have grown this big mustache. Once in a while I’ll get a comment on it and it’s usually a positive comment, but it’s rare that someone asks why I have grown it to begin with. When I had a previous version of this mustache I had a very touching conversation with a woman who admired it at the mall. On the few occasions that I have been asked about this version I’ve had a variety of sarcastic responses:

“My house boy missed a spot.”

“The barbershop was plunged into darkness due to a power outage and the barber couldn’t see what he was doing.”

I don’t know why I feel the need to be sarcastic. I should probably stop thinking along those lines. The actual answer to the question is actually a two part answer, “I like mustaches, a lot” and “because I can.”

Now I have no desire to grow a lavish mustache that involves much maintenance and is the size of a tennis racket that is held in place by some wishful thinking and a masculine version of Aqua-Net. That’s not my thing, really, because that approach is a little too primpy for my tastes. I admire the guys that have the patience and the staff that can help with the upkeep, though. Yes, I’m just letting it grow for now but I’m not looking to put something on my face that requires a huge amount of care and maintenance. As long as I abide by the house rule of “I still want to kiss lips”, all is well. Actually, the ‘stache is a favorite of my husband’s and he hopes that I continue to maintain it for a long while. I know I will barring any scissor related catastrophes.

In all honesty, my mustache was inspired by a similar style seen on two men I have crossed paths with over the years. The first was the Airborne Express delivery man that visited the radio station on a daily basis. His ‘stache was wider than mine and if digital cameras were as prevalent as they are today, I could share a picture of him right here, but that was then and this is now. I don’t know what happened to him with the demise of Airborne Express but I like to think that his mustache lives on. The second was an at-the-time recently divorced man I met at Hillside Campgrounds (the gay campgrounds that Earl and I occasionally go to) who could really rock a good ‘stache and he was a friendly sort of person. Now I have a picture of Dan and his mustache but I haven’t talked to him in a few years and I don’t want to share his picture without permission so I won’t do that.

Now that I think about it, I’ve met Homer’s friend Patrick in person and he had a really good mustache, but his is more of the traditional waxed variety, which I find enjoyable but then we get into the maintenance thing and at 5:30 in the morning I’m afraid I’d end up with wax in the wrong places on my body. Nevertheless, Patrick’s mustache is award winning and I’m sure Homer’s probably could be but I haven’t met him in person yet so I can’t say for sure. Close inspection is important.

Some think that my mustache is a result of that guy that used to be on all the game shows and Doritos commercials in the 70s, but I just like Doritos, his mustache didn’t really do a lot for me. As I recall, his name was Avery Shreiber.

Now I have completely lost my train of thought as to where this blog entry was headed. I know that the entry was inspired by the fact that I had a quizzical look flung in my direction by a new counter person at Dunkin’ Donuts (as evidenced by my tea not be prepared and ready upon my arrival) and I could just tell that she wanted to say something but she didn’t. I just smile in a friendly manner in those instances. The lady at Starbucks over the weekend yelled a compliment at me over the din of a blender and I did an Elvis-like “Thank you, thank you very much.” I don’t know why I sounded like Elvis because I don’t recall him ever having a mustache. 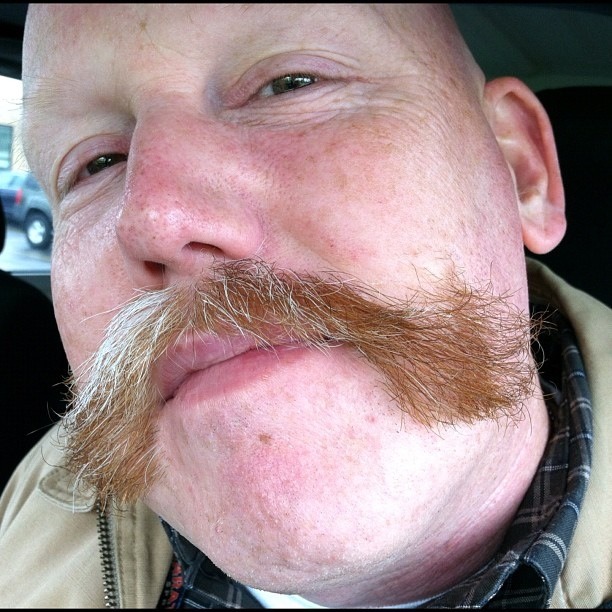