So Earl, Scott and me just got back from a Friday night field trip. After watching two episodes of “Hot In Cleveland” on the DVR, I declared that we were going to go for a ride (though it had nothing to do with what we just watched). I grabbed two fluorescent bulbs from the basement (after confirming that they worked) and we hopped in Earl’s car and headed out to the countryside not too far from where we live. When I found the perfect spot, we pulled over on the side of the road. Earl asked me to put on the warning flashers.

We were parked under the Marcy-Massena Power Lines. The lines are 765kV and are among the highest voltage lines in North America. The voltage is so high on these lines that the experts call this line an Ultra High Voltage line.

Earl and Scott stayed in the car and watched as I hiked into the field headed toward the closest tower. The first thing I noticed is that there was a slight crackling sound coming from the tower itself. Apparently an insulator was losing a little bit of current to the air around it. Once away from the headlights of the car, I noticed that the fluorescent tube in my hand was somewhat illuminated around my grasp of the tube. Once I touched the tube to the ground, the tube lit up impressively; there was enough light coming from the tube that I could see the writing on my t-shirt. Earl and Scott were able to notice the light.

I then walked back to the car, crossed the road and into the field on the other side. I was now walking away from the closest tower (and the crackling noises coming from the insulators) where the three spans start to dip down a little bit. I noticed a repeat of the tube lighting up around my hand, but it was brighter this time. This makes sense, since the wires were a little bit lower than near the tower. I touched the tube to the ground and it lit up impressively, much more than it did the first time I tried it. Earl and Scott were my witnesses and noticed that it lit up. I picked it up, reducing the light to just around my hand again, and swung it around whilst making light saber noises.

My video didn’t come out good at all. Because I was standing in complete darkness and the light coming from the tube was being powered by EMF (Electromagnetic Field) Radiation coming from the lines, I didn’t have a lot to work with in capturing the video.

I need a better setup without being paranoid about the crackling noises coming from the tower and being questioned for my eccentric activity. I need to borrow a friendly farmer’s field.

Update Sat 21 Apr 12 0006 EDT: I forgot that it was Friday night and not Saturday night. I updated the blog entry accordingly. Duh.

I have always been fascinated by power lines. I’m surprised that I haven’t been overly fascinated in the “Transformers” movies and the like, because as a little kid I thought that the poles and towers that carry powerlines across the country side kind of looked like people.

After taking care of some family business up in my hometown today, I took the opportunity to take some of the less-traveled backroads home. The ride is actually shorter if you can successfully navigate your way through the twists and turns of the Tug Hill Plateau and I was able to do this successfully. It was a beautiful day for this sort of adventure and since I was off from work, I wanted to savor every moment.

The route home included driving by the Bennetts Bridge Hydro-Electric Plant, one of two power plants on the Salmon River in Oswego County, New York (the other plant is the Lighthouse Hill Power Plant).

Built in 1932, Bennetts Bridge has two sets of powerlines coming out of it. The pair of towers carry a total of four circuits. By the looks of the towers, one set was installed before the other.

When I see the pairing of these towers standing along the side road, I actually see a “couple” with one wearing a hat. 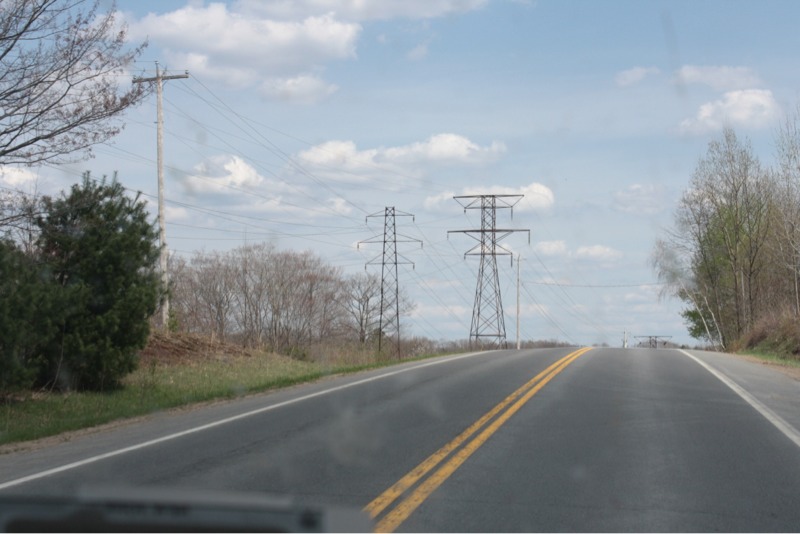 The lines on the left are on the older towers. The circuit on the right side of the right tower is a higher voltage than the others, though I don’t know the voltage of these lines. This is the first time I have been able to peg a date on these towers, knowing that Bennetts Bridge was first put into service in 1932. This pair of lines heads toward Syracuse, where it joins the other lines distributing power across New York State near Caughdenoy, which is wear the Great Blackout of 1965 originated (Aunt Clara’s participation in the event notwithstanding).

I decided not to take photos of the power plant itself because there were warning signs all over the place discouraging such activity and I wasn’t in the mood to get into a hassle with the security patrolling the area.

If you’re ever up in that area, the Department of Conservation has built a wonderful park area around Salmon River Falls, with a ranger stationed nearby to answer any questions you may have. When I was in high school it was common for some of my classmates to go up on the falls to party on the weekend. I lost a couple of classmates that fell off the falls.

It’s an especially beautiful drive in autumn as the leaves turn gorgeous shades of colors in this neck of the woods.