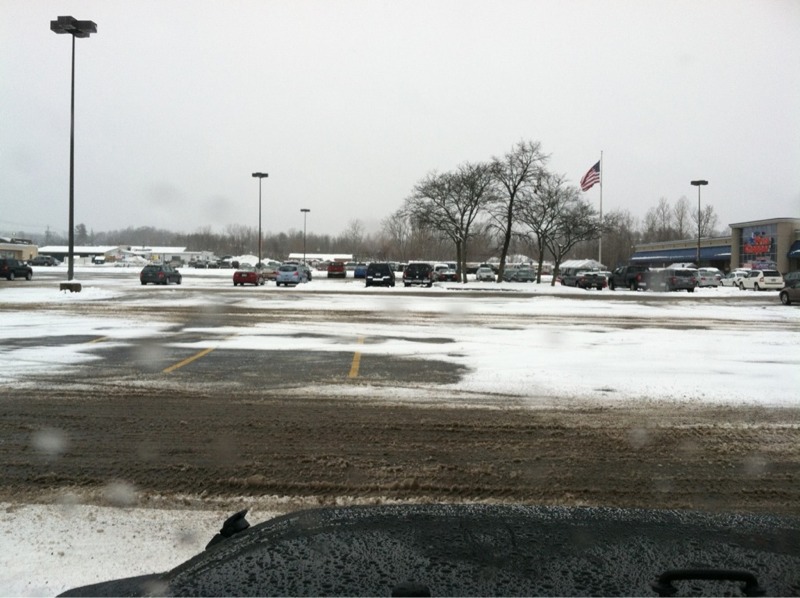 Well, whaddya know, it is winter after all. The snowfall is still a little anemic for this time of year, but at least the view is starting to match the season now.

When I got this morning I could hear the wind howling and the sounds of either really thick rain or sleet pelting the bedroom window. I looked out, expecting to see the lawn and driveway covered in snow, but instead saw that everything was just wet. It was that fun 33ºF that everyone loves to drive in. “Is it ice or is it rain? Who knows?”

As I made my way east along my daily commute, the rain quickly changed to snow as I descended into the Mohawk Valley. Apparently the plowing crews were not alerted to the fact that it’s January in Upstate New York, because very little had been done to clear the roads. It can’t be a budgetary thing, because there hasn’t been that much snow this season, so I don’t know where everyone was. When I got off the Thruway and onto the back roads (up by Farmer Bear’s place and the like), I was making my own tracks. I discovered that the new Jeep is a little more feisty on the slippery surfaces than his predecessor; popping into 4WD tamed him a bit. By the time I got to Amish country, I was following a Saab that was fish tailing all over the place at around 20 MPH. I made my way around the Saab, waved to the Amish commuters and continued along my daily trek, arriving to work five minutes late.

I did the best I could.

Honestly, I’d rather have a big snowstorm where temperatures are in the 20s instead of doing this ‘hover around freezing’ thing. It’s much easier to drive in snow than it is to drive in slush and it’s not quite so heavy when it has to be moved.

But on the bright side, at least January is looking like the part today.