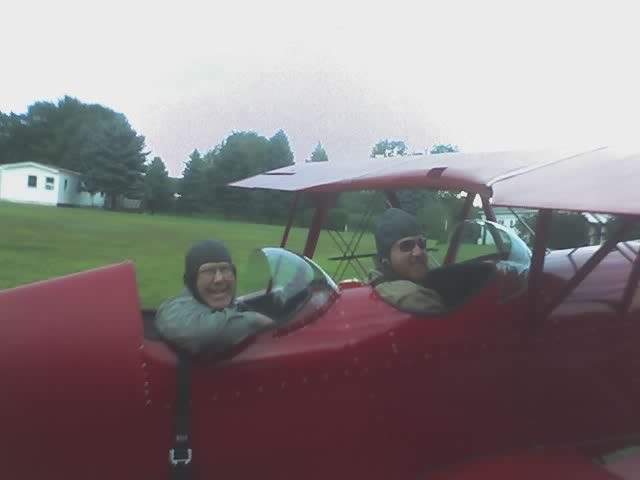 Tonight I had the opportunity to do something I haven’t done in a long time. Dad and I went flying together.

My father has been a private pilot for a long time. I’ve complained about flying in the past, but those complaints are limited to flying the commercial airlines, mainly because they herd you like cattle through a shoot. I also have another beef, no pun intended, about flying commercially. I don’t know the pilot. And I can’t trust a pilot I don’t know.

I’ve been flying with my father since I was six months old. My grandfather was a private pilot, so we’d fly with him, and then my dad became a pilot in his late 20s. Where most people have blood flowing through their veins, my father has aviation fuel.

When I was growing up, we started off flying in the pilot’s association’s Cessna 150 (which is still going this day, I might add) and then a Piper Tomahawk. Later in the early 1980s, my grandfather and father bought a 1940 Piper J5-A that my dad stripped down to the metal and rebuilt. He had that for several years, before building the plane you see in the picture, his Acrosport.

The Acrosport is a lot of fun to fly in, but it’s not for the faint of heart. It’s open cockpit, so you get to wear all the Snoopy gear. I had the honor of wearing my grandfather’s pilot gear tonight. The passenger’s seat has the ominous warning: “PASSENGER WARNING: THIS HOME-BUILT AIRPLANE IS EXPERIMENTAL AND THEREFORE DOES NOT MEET FAA SAFETY REGULATIONS”. Who cares. It’s rare that I feel that free as when I’m sitting in the passenger’s seat of my father’s airplane. Just be sure to sit low in the seat so the wind doesn’t blow your sunglasses off!

Right after take off, the engine backfired a little bit and did a little sputter thing, just as we were banking to the right. My father straightened the plane to the horizon and it stopped. Another quick bank to the right to make sure it didn’t do it again, then a zip around 180 degrees to buzz (that means fly really low and fast) my sister and Earl, who were standing along the airfield watching us, both waving. Did the sputter worry me? Absolutely not. I was in the capable hands of my father, so that meant there was nothing to worry about. He’s been in worse situations and has never had even a close call. Nothing to fear.

The rest of the flight was awesome. We flew eight or nine miles to the west of my hometown to fly along the eastern shore of Lake Ontario a little bit before heading back home. I wasn’t ready to take the controls to fly yet, though Dad would have let me. I used to fly occasionally with the club instructor or my dad when I was younger, given the controls of the Cessna or the Apache. And I’m eager to try my hands at a Cessna 150 or 172, but not his Acrosport. Not yet.

Afterwards, we had a wonderful meal with my Dad, his girlfriend Karen and my sister Jennifer. Great conversation, delicious food and a flight down memory lane.

You can click on the picture above for more pictures from the flight.