First, I have to thank everyone for the outpouring of love and support. The love from friends and family, far and wide, old and new, has been nothing short of amazing and it is with the most heartfelt words that I can express in a blog that I can say thank you. Thank you very much.

Secondly, I have mentioned before that I sometimes use this blog to express my thoughts in an electronic therapeutic endeavor. I know that when I feel uncertain about something, I want to know if anyone has experienced what I am experiencing or about to experience; for example, when I needed surgery a while back, I read blog entries from others that had experienced the same surgery and knowing what they experienced helped my experience. See, the powers of technology can be used for something other than automatically flushing a toilet, they can be used for good.

So I’m going to write some things in this blog entry just to process things a little bit.

I have been the “family spokesperson” for the family. Because my dad died in a plane crash, the FAA and the NTSB are involved. I have spoken with the investigator leading the effort to find out why the plane went down. Since the plane was a private plane, there’s no black box or anything of that sort. Investigators interview eye witnesses and examine the wreckage as closely as possible to determine the cause of the crash. It’s going to take a while. The investigator from the NTSB is a really nice guy.

Also, because dad died in a plane crash, the news media wants to know things, so I have been answering questions with television reports, newspapers and the like. One of the local stations wants to do a interview with the family this weekend. I think that’s nice.

And because dad died in a plane crash, I’m never going to be able to see him again. No open casket, no viewing. That doesn’t particularly bother me, as I know Dad wanted to be cremated and his wishes will be honored, but I needed to feel one last feeling of connection before I could release what has been bubbling inside of me since hearing the news Thursday afternoon. I tried walking around his workshop in the garage where much of the assembly work of the airplane was done. Earlier this year I had given Dad one of my old school clocks from the collection to hang in the garage, I noticed that he had cleaned it up, replaced the stem used to set the time and had it running proudly on his wall. That made me smile. The garage/workshop was still just as he left it Thursday morning, where he had undoubtedly stopped before heading to the airport. I felt good things being in the garage but I didn’t feel the connection that my heart and spirit needed to feel. I needed to spend some alone time with Dad just one more time (that alone time still including Earl in the mix). So, despite the bad roads (it was snowing up there yesterday), I told everyone in the house that Earl and I needed to run out for a few minutes, stating that we’d pick up some groceries we needed, and we headed up to the airstrip that my Dad co-owned.

The inch or two of snow on the grown prevented us from driving into the sandy parking lot, so Earl and I parked along the dead end road that runs parallel to the runway and we hiked over to the hangers. Knowing how Dad buttoned everything down, I was able to squeeze into the airplane hanger and see his other plane, the one that he and I had last flown together in, his AcroSport. As soon as I touched the plane, I felt the connection that my heart was looking for. I put my hands on the engine cowl and then laid my head down on it, and that’s when all the emotions let loose. And that’s also when I instantly felt better about things and knew that everything was going to be okay.

The plane was all set for the winter. The open cockpit covered with the custom fitted coverings perfectly in place, cloth “socks” over both ends of the wood prop, protecting it from damage. The prop was perfectly horizontal, a sign of dad’s regimented, perfectionist behavior that permeated his entire life.The battery charger was in place, keeping the battery at the level it needed to be so it wouldn’t get damaged during the winter.

Walking around the plane I stopped at the tail, which bears the identification N number that contains his initials. I smiled. Coming around to the other side I paused and silently told Dad that I would make sure that the plane was well taken care of until we could find a new pilot to fly it.

Earl stood by my side the entire time and comforted me, he’s the only one that can occupy the space I find when I need to be alone.

I snapped a few photos of the plane on my phone so that I could carry them with me. When we returned to the house, I found a photo of Dad standing in front of that plane. I added that to my phone as well. I’m sorry that I will never be able to fly with Dad in the Tailwind as I really wanted to and had no hesitation to do so, but I’m so happy that I got to fly with him in the Acro. And I’m going to take good care of it until someone else can take it airborne once again.

Here’s one of the photos of the Acro Sport that I took yesterday. 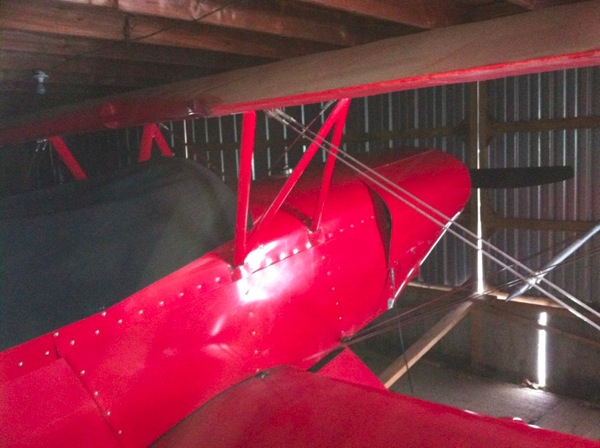 And here is a photo of Dad in the Tailwind the first time it was taken out. If you look close you can see him at the controls. He only taxied it that day as he didn’t feel it was quite where it needed to be to go airborne. Though it met the FAA certification standards, he felt he had a little more tinkering to do to meet his own safety standards. 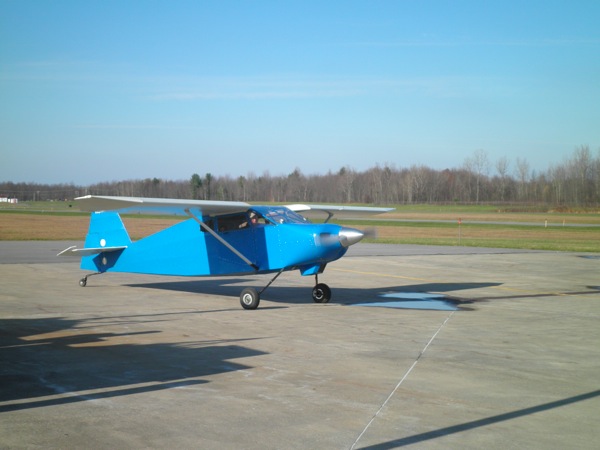 I found out something about my dad yesterday that I knew but didn’t know he shared in this way. When asked why he was such a happy man, perhaps by a customer at the family owned business, he had a standard response…