My dad is a private pilot and has built his own airplanes as well. Tonight was also the first night that I’ve ever flown in his new Acro Sport. WOW! It’s an open cockpit bi-plane (four wings instead of two) that cruises at about 110-120 MPH.  He used to have a Piper J-5A from the 40s that cruised along at 80 MPH, so this one is really a rush. You get to wear the old aviator’s helmet and goggles and everything in this!

My dad has aviator fuel for blood, and he’s happiest when he’s flying or working on his airplane.  We used to fly a lot together, it was nice doing it again today.  I imagine that I’ll become a private pilot someday as well.

I think that dad might have been at his happiest when he was behind the controls of an airplane. He learned on a Cessna 150, but his first plane was a 1940 Piper J-5A that he co-owned with my grandfather. He and I would go to small airports in the area for their weekly “fly-in” breakfasts. We’d chug along at 80 MPH. I loved flying in that plane with him. My grandfather would sometimes go along in his homebuilt Jungster.  As a teen, flying with my dad is when I felt closest to him.

The plane mentioned in the first blog entry was his first homebuilt plane. It’s an AcroSport and he said that while it was fun, piloting it was like driving down the road at 100 MPH with the hood up, just because of the way the plane sat. He felt like he could never see where he was going. However, it was a solid plane and one that I enjoyed a few trips with him in. The plane sits at the airport up the road from his house, a grassy airstrip that he co-owns with a number of other pilots.

His latest project was a Wittman Tailwind W10. The plane received it’s tail number in September and after meeting all the necessary inspection requirements, a couple of weeks ago he took it up for it’s first flight. He called me the night of the first flight and told me about it. I could hear the excitement in his voice. I could hear the pride in his voice of again flying something that he had built with his own two hands. The plane was a lot faster than he thought it would be but he knew he would enjoy it once he got used to how it handled. When he built the plane he used the engine from my grandfather’s now decommissioned Jungster. Others had built the same type of plane using the same type of engine, so he wasn’t in any new territory here.

Today my father took the Tailwind for it’s second flight. Earl called me at work today to let me know that the plane had come down; news reports say the plane crashed about a mile from the airport where the plane was kept. My father did not survive the crash. This weekend, amongst all the arrangements and everything that is done in these sorts of situations, I have asked Earl to go with me to where the plane crashed and my father passed on.

My dad died today doing something that made him really happy. I really believe that the medical examiners are going to be surprised when they find aviation fuel in his veins, because being a pilot was what my dad was. His eyes lit up in an amazing way when he was behind the controls of a plane. You could feel that he was in control of his destiny. He was a wonderful man and a dad that a son could easily look up to. I stand in awe of my father and I’m sad that I’m never going to be able to fly with him again but I’m happy that he was doing what he liked to do right up until the end.

I have many pictures I would love to share and I probably will, but I quickly found this one from my 30th birthday. When this photo was taken, he had proclaimed to the crowd in attendance that he was proud of his boy.

The feeling was mutual. I love you, Dad. I’m going to miss you very much. 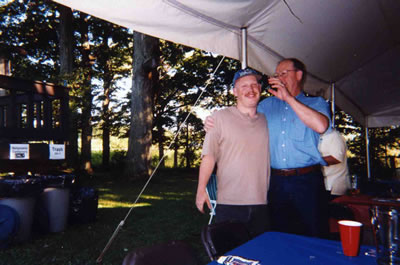