But, as a gainfully employed web developer, I have to say that I am rather proud of some of the philosophies of the company that I work for. I work for the largest rural telephone company in the United States. As a company that has grown leaps and bounds of the past 10 years through various acquisitions, the latest being a sizeable chunk of Verizon’s former landline business, Frontier Communications provides voice and data communications to many of the harder to reach places in the country. That in itself is kind of cool.

One of the driving forces of Frontier is community engagement. Our internal communications are packed with photographs, articles and the like of the company doing something, somewhere for the community. Blood drives, shelters, scholarship funds and the like are just the tip of the iceberg. Again, another cool thing.

When I walk into the main entrance at work, I can’t help but notice the latest poster on display. Frontier prides itself on being a 100% U.S.-based workforce. Everything is based in the country; we are as “Made In America” as telephone and internet service can be. If you call in with a trouble, you’ll speak to someone in the states. Our women named Peggy are really women and they don’t fake an American accent. I kind of like the idea of working for a company that is striving to keep it’s workforce U.S. based. In addition, and here’s the part that I really like, Frontier is going out of it’s way to hire men and women that have served in the Armed Forces. So many of our soldiers are coming home to find they have nothing, it’s good to work for a company that is striving to give them something. 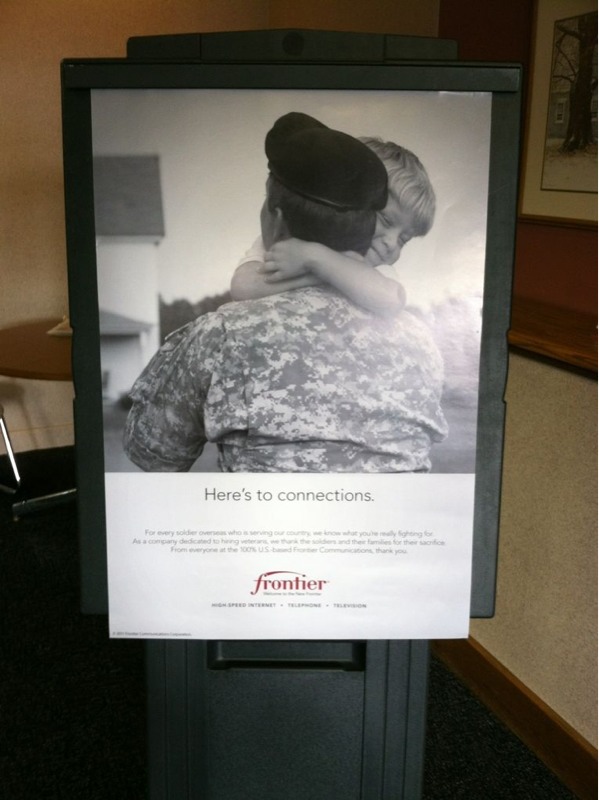 Giving back and making a difference are big priorities when I’m looking for my next employment opportunity. I have to feel good about the work we do. I’ve been my position for over 18 months and I have to say, I’m still kind of diggin’ it for many, many reasons.