Work is chaotic today. Several co-workers were unable to get to work due to the flooding from the constant rain of the past 48 hours; rain that added to the already swollen rivers and creeks that were still quite impressive after Hurricane Irene.

I noticed that there were hardly any cars on the road this morning, especially when I drove through the small village of St. Johnsville. Turns out that I wasn’t suppose to be on the road in Montgomery County; all the roads have been closed and they are ticketing drivers if they are creating non-essential traffic. I guess I was lucky, the only other vehicle I encountered in Montgomery County was a horse and buggy. I don’t think the Amish drivers heard the news since they don’t have radio and all. The horse seemed happy.

They are now really cracking down on traffic on the roads today though, so I have no idea how I’m going to get home. The alternate back route that I usually take doesn’t pass through Montgomery County but the bridges over the West Canada Creek are closed due to flooding. I might have to make a scenic trip through the Adirondacks if I want a home-cooked meal tonight. Many others at work commute a similar distance, albeit from a different direction. They are planning their routes out as well.

When I was illegally passing through St. Johnsville this morning I noticed that the marina along the Barge (Erie) Canal had flooded so bad that the docks were no longer visible. Some boats looked to be floating over where the docks should be. The statue that stands next to the little lighthouse had water up to it’s neck.

Luckily the building I work in is in the foothills of the Adirondacks, so we are high up in the terrain. There is a reason I have always told Earl that I never want to live in the valley. I need to be up on top of hills so I can see what’s going on.

And so we don’t float away. Godspeed to those that are having much, much worse experiences with the floods today. I hope they are safe.

It has rained a lot since Tuesday. Our backyard continues to be flooded. 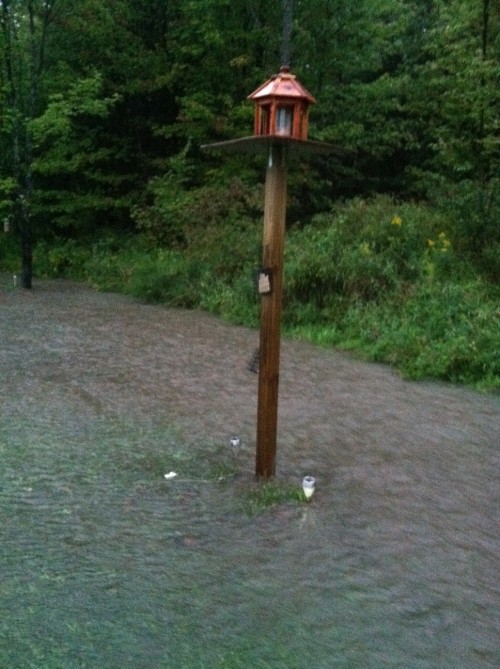 We have had some very impressive weather over the past couple of weeks: the remnants of a hurricane, an earthquake, a nearby tornado and of course lots and lots of rain. Many are telling us that this is a sign from God that He is not pleased. While I have a hard time believing that an all-loving, all-benevolent force would be so vengeful, I can see Mother Nature trying to nudge us a little bit to let us know that she’s not going to put up with our destructive ways much longer.

People tell me that this weather is just part of the cycle, the natural order of things. That’s all well and good and I can buy that, but sometimes I wonder if we are in the part of the cycle where we go from rinse to spin and the junk goes down the drain.