It was earlier this year that I was on the road and decided to stop for a quick bite to eat in the middle of nowhere. Luckily, a set of golden arches signaled the location of another fried nirvana and I made the decision to go through the drive-thru. Trying to stay healthy, I opted for a grilled chicken sandwich value meal but then I negated the healthy part by making said meal a large. (It’s not a super-size, wink wink).

The surly-turned-friendly drive thru attendant handed me two bags: one which contained my meal and another which contained a Coca-Cola glass. I was surprised by this; I didn’t know I would be getting one of these glasses. The fries were turned upside down in the bag.

I didn’t go to McDonalds a lot over the summer or through the autumn, but a couple of weeks ago on my way back from Danbury, Conn. I stopped at another McDonalds where I ordered the same meal. I was handed another glass for opting to go large. This glass was tinted brown, whereas the first glass was tinted green.

When I was a kid there was a fast food restaurant chain here in Upstate New York called Carrols, and they had collectible glasses back in the 70s. These glasses (I think) had lead painted characters of Looney Toon characters on the side and were quite nifty to look at. While the Coca Cola tinted glasses didn’t have Looney Toons characters on the side, they are still quite attractive. A little research on the internet turned up that they not only have green and brown but they apparently have _six_ different colors to add to your collection.

I have become obsessed with these glasses.

So I went to our local McDonalds and proudly ordered the same meal I had ordered out of town. Twice.

“Oh we stopped those a couple of months ago,” said the manager as I beckoned her over with concern on my face. “I sold the display for $50 and gave the money to the Ronald McDonald house.” Well that was a very honourable thing but where the hell was my glass?

I am still obsessed with these glasses.

Earl managed to pick up a blue glass in his travels and after a little investigating I found that we had one other green one but I still need pink, purple and some other shade of blue.

I am resisting the temptation to go to other stores to find these glasses. However, I am considering purchasing a set on ebay.

If anyone wants to share a glass with me that they don’t want, I’ll pay for shipping and I’ll give you a shout out on the blog. 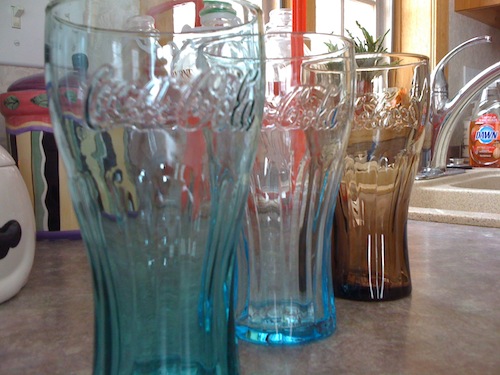