It’s been a very long time since I’ve flown alone. Not since my radio days have I been without Earl on a commercial flight. I’m in bachelor mode in a different place.

Sitting I’m front of me are two young women. One of them has never flown before. She has a very appreciable innocence about her that is refreshing.

I’ve been flying for as long as I can remember. One of my earliest memories is flying with my grandfather and father in a Cessna 172. It was way before kindergarten. I recall puking all over the place and my mother later yelling holy hell because my father had cleaned up the plane but not me. That was the last time I was sick in an airplane.

Most of my favourite memories from growing up are aviation related. Whether it was dropping sandbags from a Piper J5A at the local airport in an effort to hit a target or just flying to another airport for Sunday breakfast with my dad, I have always been a pretty happy guy in the sky.

I often follow the forums on airliners.net and contribute photos to the plane database. I enjoy looking up the tailnumbers of planes in the public knowledgebase. I think my next career will be aviation related. Probably waving the big glow sticks. I wouldn’t want to be a commercial pilot, I’m more
interested in sticking to a Cessna. I’m thinking a Cessna 182.

There is one woman who tried to use the bathroom during takeoff now roaming the cabin despite the lights that say the contrary. Meagan, the flight attendant, is giving her the evil eye. I’d just giver her a stern warning and offer her the chance to get outside and push if she didn’t do as she as told.

Below is a picture of one of the Finger Lakes. I’m not sure which one it is. 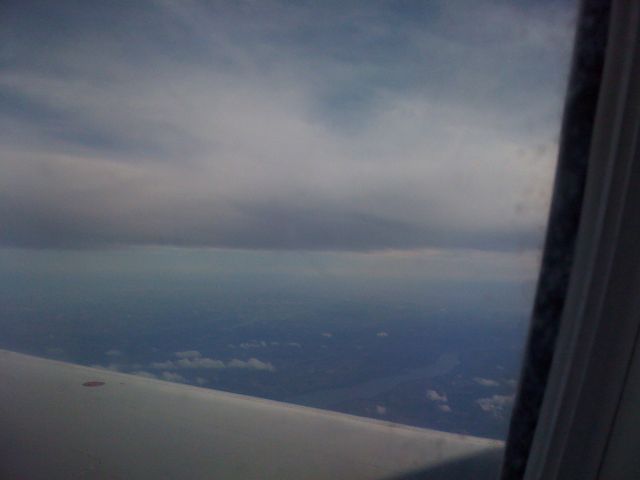