I’ve been looking forward to this day for a long while. Like a young child at Christmas, I’ve been counting down the days until the release of one of my most favorite television shows on DVD.

“Can I help you with something?”, the young person behind the counter asked, really not interested but making a fair attempt at going through the motions.

I resisted the urge to respond with “No, I’m just browsing”, as said clerk was standing behind the customer service counter at Circuit City and all that was behind her was a running conveyor belt with no items on it. “I’m looking for a DVD set that was released today. Could you tell me if you have it in stock?”

“What’s it called?”, she asked as she fumbled with the ancient text terminal in front of her. I imagined the green characters dancing on her uninterested gaze.

“The Secrets of Isis.”, I replied.

“What?”, she asked, “The Secrets of …”. Gene Rayburn or Brett Somers weren’t around so I played my own version of Match Game.

“Isis”. I didn’t even need a card, a circle or a triangle to fill in the blank.

“Isis”, she parotted. She obviously had no idea what I was talking about.

“Yes, ‘The Secrets of Isis’. It’s a Saturday morning show from the mid 1970s. It was part of ‘Shazam!’.” I put my hands out in a yoga like stance and said “Oh mighty Isis.” I was doing this chant, right there in our Barbie dreamhouse version (think half-sized) of Circuit City. I somewhat hoped that the lightning bolt would strike and I’d turn into Blue Marvel right in front of her, but the gods helped me keep my alter-ego disguise intact.

“Isis. I-S-I-S.” Becoming quite perturbed, I resisted the urge to shriek out the letters as I spelled out my favorite superheroine’s name, but looking back I think it would have added the special touch to yell like that spelling bee champion did a number of years ago.

“It was released today. How do you know if it’s popular or not?”

“The computer says it’s not popular”, she retorted. Apparently the ancient text terminal at Circuit City is all knowing.

“Do you expect to have it soon?”

“No. Stores our size aren’t slated to carry it.”

I was going to get all sarcastic about the size issue when I decided to take the superhero route and simply responded, “Thank you for your help.”

After twenty miles and six stops at different Mini-Me versions of the stores in our area, I returned home empty handed.

“The Secrets of Isis” was released on DVD today. Tonight, many fans of the show are reliving memories and watching episodes in glorious DVD quality.

I must wait until Thursday. That is when my order from Amazon arrives. 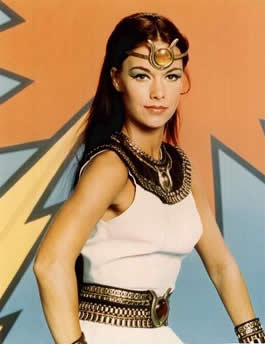